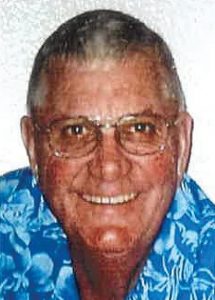 Raised on an Exeter farm with his parents and brothers, Marv and Marty, Max graduated from Exeter Union High School in 1952. He attended Washington State College in Pullman, Washington and College of Sequoias in Visalia, California.

At a gather not long ago, a friend told Max, “When I came to College of Sequoias to play baseball in 1957, two years after you were there, I was advised you were a legend.”

Max did attend College of Sequoias and was an outstanding athlete. He was All Conference end on the football team in 1954 and a pitcher on the 1955 baseball team.

Max set a record on the baseball team that still stands, setting a single game strikeout record; Max struck out 21 batters against Fresno City College. He also hit a home run in the same game, winning 3 to 2.

Maybe Max is a legend.

In 1955 Max signed a contract with the New York Yankees. He pitched a year with the Modesto Reds of the California League and the following year with the Spokane Indians.

Max served in the U.S. Military, the Army, spending most of it in Germany.

He spent a career in sales and sales management.

Max and his loving wife Barbara, of forty years have lived the last many years in Coeur d’ Alene, Idaho. He loved fishing and boating on Lake Pend Oreille in his cabin cruiser with family and friends.

Max was preceded in death by his parents and brother, Marv.

He leaves behind his wife Barbara; one son; six step children; sixteen grandchildren; ten great grandchildren; nephews and nieces; brother, Marty; and a host of friends.

Max was a believer, a Christian and plans to pitch on Heaven’s Nine with his little brother Marv. Marv, also a pitcher, was a mainstay on the 1957 College of Sequoias, State Championship team.