Lora Lynn “Lorrie” Cooper-Vincent passed away peacefully in her sleep on the morning of May 26, 2021. She was 56 years old. Lorrie was born Jan. 16, 1965, in Exeter, Calif. to Forrest Cooper ll and Dorothy (Peck) Cooper. She was a 1983 graduate of Woodlake High School, studied animal science at Cal Poly University and eventually got her associates degree in agriculture from College of the Sequoias. 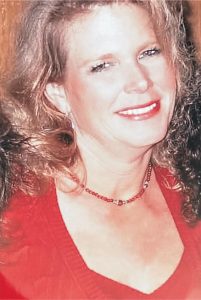 In 1990 she attended San Joaquin Valley College where she became a registered veterinary technician and worked for Kingsburg Veterinary Clinic from 1990 to 1996 and then Redwood Veterinary Hospital from 1997 to 2000. She married Richard Knutson April 21, 1990 with whom she had two daughters; DeAnn and Kasey. Later she went on to marry John Vincent with whom she had another daughter, Monte.

Lorrie truly lived life to the fullest through simple pleasures—chatting on the phone with friends and family, oil painting, beadwork, different artwork, and gardening. Lorrie had an uncanny ability to reach people in a profound and positive way.

She is survived by her three daughters DeAnn Knutson Valdez, Kasey Knutson and Monte Vincent; a granddaughter EvaLynn Valdez; her mother Dorothy Peck; and her siblings Cindy Rocha and Forrest Cooper lll. Family, friends, and others whose lives Lorrie touched are invited to the Visalia PPAV Hall, 820 E. Main St., from noon to 5 p.m. on Sunday, June 6, 2021, to reminisce and celebrate this beautiful soul.

Funeral services are under the direction of Sterling and Smith Funeral Home in Tulare, Calif.