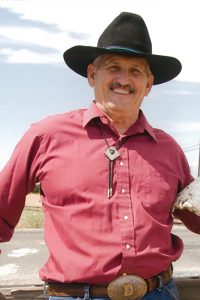 He attended Strathmore High School and graduated with the class of 1960 where he was active in sports with football being his favorite. Don married Genetta Jones on Dec. 29, 1962 in Lindsay, Calif. He passed away just two months short of celebrating their 59th anniversary.

During the 1970’s, Don owned and operated Don’s Shell Service Station in Strathmore. Many would come to Don’s not just for fuel but because of Don’s mechanic ability and fair dealing. While running the station, Don would build and sponsor cars as well as run the pit crews for several race teams at Rocky Hill Speedway.

Don learned the meaning of hard work from his parents and older siblings. He held many jobs over his lifetime. Don’s ability to work with his hands and fix anything he touched ranged from cars, household appliances, and big work machinery. He worked at Champion Homes, Lindmore Irrigation, Wilsey Foods, to name a few before retiring from (C.C.P.I.) California Citrus Producers, Incorporated in Lindsay in 2003.

He was an active member of the Strathmore, Lindsay and Porterville communities. Over the years, he was a Volunteer Fireman and Little League Coach in Strathmore. He bowled for many years in weekly men’s bowling leagues in Porterville where he also served as an officer on the Men’s Bowling Association Board of Directors. He participated in weekly horseshoe tournaments in Lindsay.

Don was also a member of the E. Clampus Vitus (Clampers).

Don had many loves and hobbies. He was known for raising a great garden (most years), and was known for his delicious okra, red onions, blackeyed peas, tomatoes, and his homemade cured olives.

He loved watching local youth sports. For years you could find him on Friday nights watching High School football at Spartan Stadium. He especially loved watching his grandkids, whether it be wrestling, football, baseball, basketball, water polo, or swimming, Don was there.

Don also enjoyed watching professional sports, NASCAR and NFL football being his favorites. Don was known for his love of Bill Elliot and the San Francisco 49ers.

He loved the outdoors the most, especially the mountains! He loved camping, sleeping out under the stars, deer hunting, and fishing. Early spring through late fall, you could find him in his 1972 Ford Bronco with his windows down taking in the fresh mountain air driving the roads of our local mountains. Don cherished his time in the mountains either chasing that elusive big buck across Jordan Peak, or casting a lure toward that big Rainbow or German Brown Trout, it didn’t matter to him, as long as he was in the hills, he was happiest there!

He was preceded in death by his parents William and Callie Mauck; two brothers, Billy and Cecil Mauck; and one sister, Lois Jackson.

All family and friends are invited to a memorial service starting at 11 a.m. on Saturday, Nov. 20, 2021 at the Strathmore Veteran’s Memorial Building. Lunch will be catered and served at 12 p.m. with a memorial toast at 1:15 p.m. Interment will be private.