N. Corene Keys peacefully passed away on Nov. 9, 2021, in Visalia, Calif. She was a multi-generational, lifelong resident of Tulare County. Corene was born on Dec. 22, 1940 in Exeter, Calif., to Bryant and Fleata Pennebaker. She was the fourth child of six children. 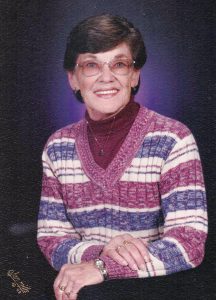 Growing up in Exeter, Corene attended Locust Grove Elementary just north of town. She was the Class of 1958 at Exeter Union High School. Moving on to the College of the Sequoia’s, where she received her A.S. in bookkeeping. As a child and teenager, Corene was an active member of Tulare County 4-H. She loved to tell us stories about all the shenanigans she and her friends would get into at 4-H summer camp in Whitaker Forest, Calif. She also enjoyed spending her summer days at the Pennebaker Cabin in Mineral King, Calif., with her Grandmother, Grandma Mom.

A little hard work never scared Corene, starting in the grape fields alongside parents and siblings in her younger years. She was also a car-hop at Mearle’s Drive-In, in Visalia, Calif. Next she waitressed at the Chuck Wagon in Exeter, Calif., before landing the bookkeeping job at the Exeter Warehouse, which later became Orange Belt Supply Company in Lindsay, Calif., where she later retired from. That’s when her late husband and she bought the Yokohl Market in Exeter. They owned it for 15 years.

Corene always had a curiosity of many different actives, from looking for gems, rocks, arrow-heads and old bottles, to going to the Mojave Desert to ride her quad with family and friends. Corene was an active member of the Tule River Rock and Gem Society, helping put on the annual Rock Show in Exeter every year.

Corene is preceded in death by her late husband, Elmer Keys, a cowboy, from Exeter, Calif; her parents, Bryant and Fleata Pennebaker; and two of her sisters, Fleata Anne Manor of Lemon Cove, Calif., and Vilola Fabel of Woodlake, Calif.

She is survived by her children Christen Smith of Elderwood, Calif., and David Keys of Texas; four grandchildren, Susie Hendrix, Joshua Hendrix, Amber Smith all of Exeter, Calif. and Garrett Keys of Texas; five great grandchildren, Bryant Hendrix and his fiancé Desiree Figueroa, Larry Williams, Elizabeth Williams, Landon Smith and Lawsyn Michalk all from Exeter; her 1.5 great great grandchildren, Travis Lee and Cole Anthony Hendrix, who is still in the oven, also from Exeter; her sister, Carlee (David) Barros of Hanford, Calif.; and brothers, Roy (Celia) Pennebaker of Exeter and Sherman (Linda) Pennebaker of Reedley, Calif.

She helped raise three generations of us all the way up until the day she left us. She will be greatly missed.

Graveside services will be held at 2 p.m. on Friday, Nov. 19, 2021 at the Exeter Memorial Cemetery. Condolences may be sent to the family at www.evansmillerguinnchapel.com. Services entrusted to Evans Miller Guinn Chapel.