Lawanda (Wanda) Jean Wollenman passed away peacefully on the afternoon of Nov. 3, 2021 in her home in Lindsay, Calif., with family at her side. She was 94 years old. Lawanda had been under the care of Kaweah Health Hospice for several months. 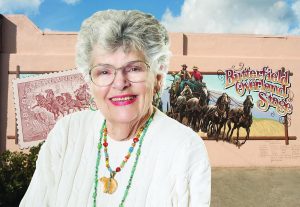 She was born July 17, 1927 in Canadien, Okla. Her parents were Guy Warfield and Verda Duckworth Warfield. She had two younger brothers, Robert and Donald, who preceded her in death. The family migrated from the Oklahoma Dust Bowl disaster to Lindsay, Calif., in 1931. She attended Jefferson Elementary School and graduated from Lindsay High School. She became a registered nurse through the Cadet Nurse Corps at Alameda County Hospital. Lawanda had hoped to serve in the Navy but the war ended and the nurses were no longer needed. She moved to San Diego, Calif., for a nursing job. In the winter of 1950, she married Dorsie Henry Booker, a first lieutenant in the Marine Corps. She adopted his infant son, Michael Dorsie, and in September, gave birth to a daughter, Shawnee Ann. Dorsie Henry was killed in Korea on Dec. 2, 1950.

In April of 1953, she married William Joseph (Joe) Wollenman. They had two sons, Guy Anthony and Joseph Matthew (Jody).

Lawanda organized and ran the Candystripers program at the Lindsay Hospital for a number of years. She also volunteered with the Well Baby Program for many years. Lawanda worked part time in the Lindsay District Hospital Birthing Unit while her children were growing up.

With husband Joe, she sponsored the “Ski Bus,” enabling many high schoolers to get to Wolverton Ski Bowl on Saturdays. She taught an uncountable number of teenagers to ski.

Lawanda worked for many years teaching in the LVN and Psych Tech programs at Porterville Community College. She earned a bachelor’s degree in health careers and was a certified hypnotherapist, which she found very useful in helping her students cope with testing anxiety and other issues.

She mentored and encouraged countless young people who came to her home for guidance as they struggled to reach maturity in the 1960s and ’70s.

Lawanda was an accomplished portrait and landscape painter and had a pilot’s license.

After retirement, she was active in the Lindsay Art Association, the Porterville Art Association and taught pastel painting classes. She was also a prolific designer of bead jewelry, selling and giving away her handiwork to all who were interested.

Lawanda loved the mountains and spent much time at their cabin in Mineral King and at their remote cabin near Camp Nelson.

In 1988, she was first elected to the Lindsay District Hospital Board. She remained on the board through the closure of the hospital and out of that hospital district designation helped to create the Lindsay Wellness Center, which opened in 2006, an accomplishment of which she was very proud.

She traveled to Mexico several times for art classes and loved San Miguel de Allende. Additionally, she traveled to Kosova twice to visit her great-granddaughters when they were infants.

Lawanda was the Honored Person at the Lindsay Orange Blossom festival in 2015.

She is preceded in death by granddaughter Jessica Michelle Wollenman in 1987; her beloved husband, Joe Wollenman in 2003; and ‘almost human’ dog, Baxter, who passed away in 2020.

The family wishes to extend thanks and appreciation to the employees of Caring Hands/Visiting Angels in Lindsay for the wonderful support they provided for Wanda in the last years of her life. Special thanks to Tieda and Jennifer for being her ‘rocks’ in the last months of her life. The family gives thanks to Irene and Chuey Gutierrez for being there above and beyond the call of duty. Thanks to Connie Navarette for her weekly love, care and support. And special thanks to Vanessa Gutierrez for being Lawanda’s guardian angel almost every night for years and for being such a sweet young friend to her.

A private memorial service will be held for the immediate family. In lieu of flowers and such, please make a donation to Kaweah Health Hospice.