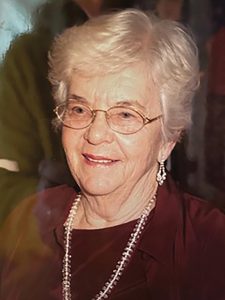 Mary Jo was born on Oct. 20, 1922 in Los Angeles to Gertrude and Karl Gotham. She was their only child. She grew up in North Hollywood and Studio City and attended North Hollywood High. Mary Jo graduated from the University of Redlands in 1943 and married Willard Wirht the same year in Georgia prior to his deployment to the Pacific theater of WWII. After the war they moved to Redlands and in 1946 had their first child. They soon relocated to Exeter, Calif., where she lived her next 75 years.

She and Willard raised five children, farmed plums, grapes, peaches and citrus while maintaining successful careers as educators. She taught a generation of Exeter 8th graders American History, the Constitution and guided them through their first term paper. Mary Jo was a brilliant educator, serious about teaching her subject and deeply caring for each of her students. They thought she was very cool.

Until Willard’s passing in 1992 and until she could go no more, Mary Jo was a willing and eager traveler. She cruised, jetted, road-tripped and RV’ed, experiencing the globe. Much of her last 50 years were spent at the family cabin in Wilsonia, Calif. Mary Jo was everyone’s favorite; fun, generous in spirit and great company.

For 75 years she was a member of the First Presbyterian Church in Exeter. She was in multiple bridge clubs, golf groups and garden clubs. She was a member of education sorority Delta Kappa Gamma, active as a Redlands alumna, fully supported the Exeter Boys and Girls Club and was a contributor to numerous civic groups. Mary Jo’s presence made a difference.

She is preceded in death by her husband Willard H. Wirht and son Ted.

A celebration of her life will be scheduled for a later date. Memorial contributions may be directed to the First Presbyterian Church of Exeter, the Exeter Boys and Girls Club or to a charity of your choice.

Arrangements by Smith Family Chapel, Exeter. Online condolences may be sent to smithfamilychapel.com.