Robert Matthew Powell passed away on Friday, Dec. 17, 2021. He was 50 years old. Rob was a loving son, brother, uncle, and nephew at the time of his passing. He was living in Exeter, Calif., most recently, but was still able to count many friends and family from the years he spent in Woodlake, Calif. and Visalia, Calif. 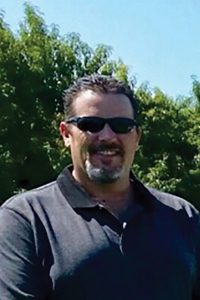 Rob was born on Oct. 4, 1971 in Dinuba, Calif., to Lonnie and Susan. He attended Woodlake Elementary School and he spent two years at Woodlake High School, and in 1987 he garnered a valley championship in football. He spent his last two high school years at Redwood High School, where he played Football and competed in Track and Field. While the Cowhide was just out of his team’s reach, the overtime game he played in 1989 has been said to be one of the greatest Cowhide games ever played.

After football, he could be found at the track in the discus ring, where he would spend hours perfecting technique. It was on these grounds that he shined. The time and effort he spent with the discus truly paid off when, in June 1990, he competed in the California High School State Championships. In his final throw, he surpassed the previous leader by almost three feet. Rob’s throw that day still stands in top twenty-five of all time in California High School Track and Field.

Rob pursued an education and career in the computer sciences, which started with extensive training in Salt Lake City, Utah where he received his Certification as a Microsoft Systems Engineer. He was able to solve any computer IT problem in short order. He was also very mechanically inclined and gravitated toward the artistic side of metal work; in addition, he was working on artwork created with a 3D printer. Rob also had a passion for cooking and producing dishes that were so spicy, your eyes would water if you stood within two feet. His rule for the perfect Spanish rice: do not take the lid off until it is done. You could expect a harsh word for lifting the lid too early.

Rob had been a constant in his families’ lives for 50 years. He was always willing to lend a helping hand to those in need, create works of art, and stand in the smoke of a BBQ. His physical size, 6 feet 6 inches made him the bigger, younger brother of his family. He was truly a mountain of a man, and he will be missed.

He is preceded in death by his sister, Marisa N. Powell.

Rob will be lovingly remembered by his father and mother, Dr. Lonnie R. Powell, and Susan D. Powell; his brother and his wife, Darin L. Powell and Jennifer L. Powell; his sister, Karina M. Powell; his nieces and nephew, McKayla, Abigail, and Tucker Powell; and many other uncles, aunts, cousins, and friends in Oregon and California.

Arrangements by Smith Family Chapel, Exeter. Online condolences may be sent to smithfamilychapel.com.

“I am going to miss you, brother, there just was not enough time. I will watch the lid for you.”