Bradley (Brad) Harold Pitcock weathered the storms with humor, grace, and unwavering faith in the Lord his God. On Friday Feb. 11, 2022 Brad received his reward and walks with the angels surrounded by his family in heaven. “God promises to make something good out of the storms that bring devastation to your life, Romans 8:28.” 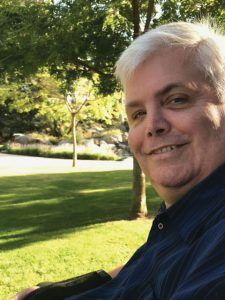 Brad was born on Oct. 31, 1962 in Tulare, Calif., to Harold and Babette Pitcock. He attended school in Tulare and graduated from Tulare Union High School in 1981. Brad enlisted into the Airforce and married his high school sweetheart Barbara Maness in 1982. During his time in the military, they had many great adventures. From being stationed in Okinawa to welcoming their first son Derek into the world at Edwards Air Force Base. They went on to have three more children, daughter Katie and Matt Villa of Visalia, Calif., son Daniel of Exeter, Calif., and daughter Kristin and Jared Statler of Exeter. Brad and Barbara also have two granddaughters, Kennedy Laplante and Emory Statler.

He was a great husband and leader of his family. He taught his children the most important things in life like rocking out to Journey when cleaning, standing up for what you believe in, and most importantly living your life for Jesus. Brad was always the fun uncle and bonus grandpa to Kolette Garza, Chelisa and Skyla Pimentel.

He spent his free time giving dirt bike lessons, racing BMX, playing cards, boogie boarding, and building rockets in his younger years. Brad had setbacks in life, the biggest hurdle was becoming a quadriplegic in 2005, but he overcame this challenge with a great smile, laughs and continued to bring tears of joy with his humor and pranks. Brad loved to spend time outdoors on his ranch overseeing his many different projects. He never gave up his faith and never missed an opportunity to share his love for the Savior. He was truly a giving man of his time, finances, and his love.

Brad is preceded in death by his father-in-law, Charles; his parents, Harold and Babette; and his sister, Denise Winsett.

He will be greatly missed by his wife Barbara; brothers-in-law, Chuck, Geary, Kevin and Steve; his sisters-in-law, Kathy, Mary, Joyce and Debbie; his mother-in-law Betty Maness which he considered “Mom”; numerous nieces and nephews, great nieces and nephews; and numerous friends and church family.

Brad had a special place in his heart for his beloved friend and Pastor Mark Wilson and friends Neal, Jim, Jeff and Greg for which he shared hours of talking politics and religion and managed to remain friends.

He loved God, his church family and extended family.

A celebration of life remembering Brad will be held at 11 a.m. on Saturday, Feb. 26, 2022 at Sierra Baptist Church 1437 E Walnut Avenue Visalia, CA. Private family burial will be held on Monday, Feb. 28, 2022. Condolences may be sent to the family at www.evansmillerguinnchapel.com. Arrangements entrusted to Evans Miller Guinn Chapel.