Pat (Jacobs) Hansen passed away on April 16, 2022 in Visalia, Calif., after a lengthy struggle with Alzheimer’s disease. She was born in Rio de Janeiro, Brazil.

Family was central to her life. Her greatest joy was becoming a mother to Bill and being involved in his activities from athletics to motorcycle racing. She was also very supportive of her husband John’s activities. She even tried to learn to play golf. 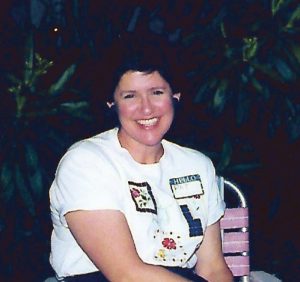 Pat’s parents met in Rio de Janeiro while her father served in the U.S. Navy during WWII in Brazil. They moved to Gaithersburg, Md. when Pat was a toddler and then relocated to Visalia in 1953.

She attended Royal Oaks Elementary, Divisadero Middle School and graduated third in her class from Mt. Whitney High School. She went on to Fresno State graduating with honors. She received a master’s and administrative degree in education from Fresno Pacific. Pat took great pride in her career beginning as a classroom teacher with Visalia Unified. After three years she was selected to be a teacher trainer with Visalia Professional Development Center. She left VUSD to work for Tulare County Office of Education as a migrant resource teacher. There she became fluent in Spanish and assisted migrant students who were adapting to American education. She left migrant education to become a language arts resource teacher for TCOE. She also was an elementary school principal at F.J. White in Woodlake, Calif. She completed her career becoming a program manager for beginning teachers at TCOE. Pat retired in 2008 after 34 years in education.

She was blessed with wonderful friends she dearly loved from childhood friend Kay Marsh to current friends she met through migrant ed, Nancy Andrews and Kitsy Murphy. Also her group of friends she called the “King’s Day” group.

Pat had a great affection for animals. She was never without them in her house and in her yard much to the chagrin of her husband.

She is preceded in death by her mother Virginia Woolman Jacobs of Rio de Janeiro, Brazil; her father, Norman Bliss Jacobs of Gaithersburg, Md.; and her only sister, Kit Jacobs.

Pat is survived by her husband of 45 years, John Hansen; her only child, William (Bill) Hansen, wife Kymber and grandchildren Raiden and Leo; as well as niece, Karen Tubb; nephews, Matthew and Scott Hansen; and her cousins, Betsy, Jimmy and Mark from Gaithersburg, Md.

No services are planned at this time. Donations can be sent to ASPCA, Alzheimer’s or charity of your choice in Pat’s name. Condolences may be sent to the family at www.evansmillerguinnchapel.com. Arrangements entrusted to Evans Miller Guinn Chapel.