She was born on June 5, 1928 in Lathrop, Mo., the youngest daughter of DeMoss and Beatrice Crunk. 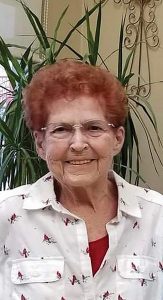 Phoebe grew up in Lathrop and Cameron, Mo. She graduated from Lathrop High School in 1946 and was valedictorian of her high school class.

Phoebe moved to the Los Angeles area, where her three children were raised. They were her pride and joy. Her employer was the Patent Scaffolding Company in Los Angeles, Calif., where she started as their bookkeeper and was promoted to the office manager for a number of years. Retiring in 1986 she moved to Lindsay, Calif. to live near her oldest son, Terry Linville and family.

She was a member of the Lindsay Presbyterian Church where she participated in the church choir. Phoebe was a two time past president of the Lindsay AARP Chapter, she volunteered in a local hospice organization in Tulare County, served as a volunteer with the CHP in the Visalia, Calif. office, and was always looking for ways to help someone else with her goal to “always leave them laughing.”

Phoebe loved to shop, always with a coupon and looking for a bargain! She knew all of the salespeople at all of the shopping outlets in town and they knew her love of shopping.

“Mom loved to dance. Her favorite artists included Elvis, BeeGee’s, Donna Summer and the Beach Boys, however her greatest legacy was her strong faith in Jesus Christ.”

A celebration of life service will be held in Napa, Calif. at a later date this year.

In lieu of flowers, donations may be made to the Alzheimer’s Association; American Porphyria Foundation or charity of your own choice. Memories and notes of sympathy may be shared at claffeyandrota.com.