Susan Joleen Anderson, artist and beloved mother and friend to many passed away unexpectedly on Aug. 1, 2022 at her home in Lynchburg,Va. She was born on March 12, 1953 in Exeter, Calif. 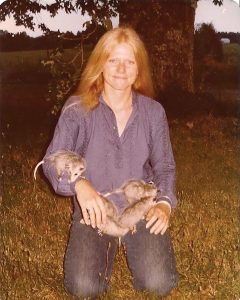 Susan was born to Thomas and Margery Crowley Anderson and spent her formative years in Exeter, Calif. until going off to college after high school. She persistently demonstrated a passion for art and kindness, traits to which she devoted her life. During her childhood, she became a beloved friend to many. As a youngster, she kindled an unfailing love for nature and animals, including riding and training her horses. Her maternal grandparents, Bertha and Arthur Crowley, owned a cabin in Mineral King where she spent many wonderful days growing up with family and friends.

Charlie Johnson, a talented musician and songwriter, came into her life while she was living in the Bay Area in 1977. They moved to Rustburg, Va. shortly thereafter and created a family with the addition of Darcy and Zane. Lynchburg became the family home for many years. Susan’s children are both deeply inspired by their mother’s love for art, nature, and altruism. Darcy’s son, Sunny, stood out as a shining star for his grandmother, Susan.

Susan is survived by her son Zane Johnson; her daughter, Darcy Johnson and grandson Sunny; and by her brother, Kip Anderson of Exeter, Calif.

Many friends from Exeter and Virginia join her family in mourning her loss.