Erleen Leinsteiner passed away on July 6, 2022 in San Rafael, Calif. She was 85 years old.

Erleen was born on Sept. 16, 1936 to Thomas Earl Ward and Evelyn Buchmiller Ward in National City, Calif. Named Teresa Erleen Ward so that her initials matched her father’s; she went by her middle name. Her sister, Marilyn, was 13 years older. 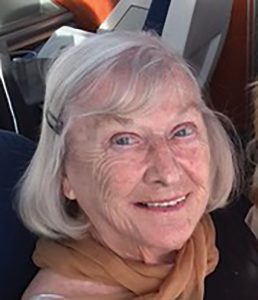 She graduated from Sweetwater High School in 1954. She married Michael F. Leinsteiner that summer and they started their family of two girls in National City, California. She attended San Diego State prior to moving to Lindsay, Calif. in 1965 and finished her college education at Fresno State in 1974 with a degree in English. She taught English at Lindsay High School for 20 years. After moving to Oceano, Calif. in 1995, she was a substitute teacher in the Lucia Mar School District. Erleen had resided in San Rafael for the last 2 ½ years. She was intelligent, creative, tenacious and quick witted.

Although she had moved away from the San Diego area, Erleen kept in close touch with her high school friends through round robin letters, then emails and high school reunions. They referred to themselves as “The Girls.” As time progressed and the group gathered annually near someone’s home, they became “The Girls with the Granny Faces.”

Erleen was preceded in death by her husband of 42 years, Mike; her parents; and her sister.

She is survived by her daughters Terri (Jim) and Mary (Paul); grandchildren Mike, Susan and Erica (Mat), William, Emma, and Tessa; great granddaughter, Catherine; and Chela, her exchange student daughter. A memorial service will be held at 1 p.m. on Oct. 1, 2022 at St. Barnabas Episcopal Church in Arroyo Grande, Calif.