Donald Harvey Poole passed away on Sept. 10, 2022. Don was born on Oct. 19, 1929 in Hanford, Calif., to Albert Edward and Suzie Frances (Thomas) Poole. He attended area schools and played football for Visalia Union High School graduating with the class of 1947. 10 days later he joined the Navy with his mother’s permission and was inducted into what was known as “the diaper cruise.” While in the Navy Don served as an aviation Structural Mechanic in Alaska-Kodiak, Adak and Tanaga on the Bering Sea. Don was a veteran of the Korean conflict, with 44 months of sea duty. 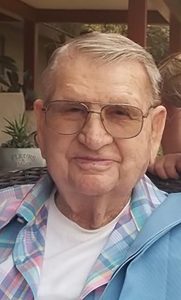 After the Navy, Don was employed at Star Laundry in Visalia, Calif. Don met Betty Ann McMurry at the Visalia roller skating rink. They were married in Reno, Nev. June 2, 1950. Don and Betty had two Children, a son Daniel Harvey Poole, and a daughter Elizabeth Ann.

In 1956, Don moved his family to Southern California where he became employed with Alpha Beta Markets loading trucks. He advanced as a driver, a supervisor and eventually the Produce distribution manager for the company’s warehouse in La Habra, Calif. In 1973, Don and Betty decided to move back to the valley, and Don returned to Star Laundry as a route driver. The Laundry sold to Mission Linens and Don was promoted to Service Manager. He retired from Mission Linen in 1991.

In retirement Don enjoyed working on and restoring classic cars. He and Betty enjoyed square dancing and were very active members of the Charter Oak A’s Model A club until the time of her passing on Dec. 4, 1999. Don and Betty were married 49.5 years. They had two grandsons, Randall and Russell Gunderman.

Don married Donna McMurry in 2000. They traveled many places in various RV’s including Canada, Alaska and multiple national parks. They continued to participate with car clubs, cruise nights and parades, as well as playing bingo and occasional trips to the local casinos.

He is preceded in death by his parents; his sister, Constance Ervin; his brother, Douglas Poole; and his son, Daniel.

A Celebration of life will be held at 10 a.m. Sunday, Oct. 16, 2022 at the Poole Ranch 2098 N. Filbert Rd. Exeter California 93221. Arrangements by Smith Family Chapel, Exeter. Online condolences may be sent to the family through smithfamilychapel.com.