The family of F. Ophelia “Buzz” Fisher is saddened to announce the passing of our matriarch, Buzz Fisher. She left this life to begin the next on Oct. 5, 2022, just shy of her 95th birthday. She was born Florence Ophelia Bosworth to Florence Marie (Overstreet) Bosworth and Nathanial California Bosworth on Oct. 17, 1927. Her father died when she was a young child and her mother raised Ophelia and her older brother, Charles, on her own, blazing trails as a successful businesswoman in what was then a man’s world of insurance and real estate development. This early influence helped shape little Ophelia into a strong and resilient woman.

Ophelia was dubbed “Buzz” by her second-grade teacher who wanted to know “what the buzzing in the back of the room” was. 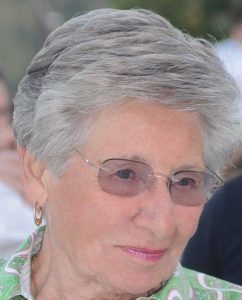 Raised in Tulare and a graduate of College of Sequoias, a friend introduced Buzz to C. Howard Fisher, a farmer in Prairie Center just outside of Strathmore, Calif. Dating included plane rides to the coast in his 1947 Luscombe Silvaire and skiing with Howard’s brother and friends at Lake Success. They were married on Valentine’s Day 1953 at the Church of the Brethren.

Buzz kept the books, drove cotton trailers to the gin and did all other chores of a typical farm wife. She volunteered in the community and in the church, and as children came along, her duties expanded to include volunteering at their schools, leading groups in their 4-H club and developing a thriving photography and darkroom business, and advocating for the ag industry.

She was active in the Lindsay community as well as with Strathmore and helped promote Lindsay as its official photographer when ambassadors from its Sister City in Japan visited. She traveled with ambassadors from Lindsay to Japan to promote the region and build relations.

She took great pride in her farm and in growing citrus, with nearly all her acreage grown from seed in her nursery and hand grafted. She had an idea about applying nutrients to the groves via the irrigation and filtration system and was told it couldn’t be done. So, she designed the system and put it to work with great success.

She loved to travel, visiting Europe multiple times and the Antarctic. She made several trips to Germany for farm tours with her Prairie Center neighbors. But some of her greatest times were on regional tours in a 1931 Model A coupe with the Happy Honkers, a Model A club. Her first vintage vehicle was a 1928 Ford Huckster that was restored by Sunkist for its centennial anniversary. It is now on permanent display at the International Ag Center’s Ag Museum in Tulare. Buzz was recently awarded the Model A Ford Club of America Service Award to provide national recognition for her continuing and selfless service to others in the Model A community.

Buzz was preceded in death by her husband Howard in 1983; former husband, Stan Barnes; husband, Milt Burtner whom she married in 1997; and her brother, Charles Bosworth.

Graveside services will be held at 12 p.m. on Friday Oct. 21, 2022 at Lindsay Strathmore Cemetery with a Celebration of Life immediately after at China’s Alley Banquet room at 170 N. Sweetbriar Ave., Lindsay, Calif.

In lieu of flowers, please consider a contribution to Tulare County Food Bank.