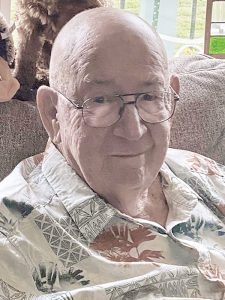 Roy moved to McFarland with his family, where he attended McFarland elementary and high school. He attended Fresno State University. Then he chose to serve his country in the United States Army.

He returned to McFarland to join his father in cotton farming. This is when he met a school teacher that became the love of his life, LouAnn Green Hand, from Porterville, Calif. They were married in 1958. While still in McFarland they had two children Mike and Laurie.

In 1964, he made a career change and became an owner of Coast to Coast hardware store in Hayward, Calif.

Wanting to get back to the San Joaquin valley, in 1970 he moved his family to Exeter, Calif. and became the owner and operator of the Coast to Coast hardware store. There he was active in Kiwanis club and masonic lodge and the merchant committee. He was a supporter of all his kids’ activities. Roy was a member of the Exeter Methodist church and later became a member of Visalia First assembly.

The love he and LouAnn shared was the RV life. Before and after retirement their adventures took them all over. Some of their mainstays were in Indian Water Resort and Pismo Creek RV resort, where they enjoyed being camp host. Their home base became Park of Sierras in Coarsegold, Calif., where they have met friends that have now become family.

The family will be doing a celebration of life on Nov. 12, 2022 in Coarsegold at the Park of Sierras. Please instead of flowers, donations could be made to your favorite charity in Roy’s name.