Lilia A. Garcia, a beloved wife, mother, grandmother, great-grandmother, loving aunt and sister passed away on Sunday, Nov. 27, 2022. She was 84 years old. Lilia is a graduate with high honors and distinction as Salutatorian of St. Theresa’s College in Manila Philippines. After graduation she met Ray who became her loving husband and soulmate of 61 years. As a devout Catholic, Lilia loved to volunteer in service of others as a catechist, liturgical and eucharistic minister with Sacred Heart Church and was recognized by the community as a recipient of Exeter Woman’s Club award “Woman of the Year.” 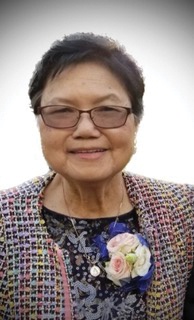 As a symbol of her strength, Lilia left her homeland in search of a better life in Chicago, Ill. in May 1972 with four children in hand, another born two months later in July and another two years later. In summer of 1985, she moved to Exeter, Calif. which ultimately became her final resting place.

She will be comforted in Heaven by her mother and brother, both former residents of Exeter, Theresa Amigleo (2015) and Emmanuel Amigleo (2021), respectively, and her son Baby Jose (1963).

Visitation will be held for Lilia from 4-6 p.m. on Wednesday, Dec. 7, 2022 at Smith Family Chapel. Directly following will be a Rosary at 6 p.m. at Smith Family Chapel.  A funeral Mass will be held at 12 p.m. on Thursday, Dec. 8, 2022 at Sacred Heart Catholic Church, 417 N. E St., Exeter. Directly following will be burial at the Exeter District Cemetery, 719 E. Marinette Ave., Exeter. In lieu of giving flowers, the family asks that those who are able make a donation to Sacred Heart Catholic Church in her memory. Arrangements by Smith Family Chapel, Exeter. Online condolences may be sent to the family through smithfamilychapel.com.