Our friend the writer Gerald Haslam has gone on, to heaven I’m sure if there is such a place. I say “our” because he was your friend, too, whether you knew him or not, not just mine and everyone else’s who has ever loved this place with words. Born in Oildale, half Texan, half Mexican, all American, he put this place on the map of people’s minds. He led the way in claiming this place as home in his heart, even if not his adult residence. He never gave up on us, not even the most illiterate, red-necked, gun-toting members of this place.

When I started this column almost 14 years ago under the title “Homepages,” it was to identify and recommend books and writings about the Central Valley, particularly our southern end of it, in the belief that we could learn to love this place better through their lenses, and in loving, improve the quality of our residence here. Our treatment of the land. Our treatment of each other. It was from reading Haslam that I came to that belief. Reading Haslam had a huge part in becoming resident myself.

He called us “the other California.” He set us apart from the golden images and latte lifestyles of the coast, the urban enclaves, and identified our unglorified lives on the agricultural landscape as honorable. He gave us our proper dimension, calling us the Great Central Valley, which it is: “a plain some 430 miles long and up to 75 miles wide, surrounded by mountains and covering nearly 15,000,000 acres,” noting it “has become the richest farming region in the history of the world.” We tend to forget that, living in its midst. 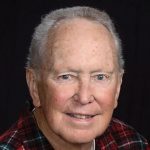 He was an appreciative person, appreciative of complexity as well as plain beauty. He appreciated every chance he got to come speak to his people here on college campuses and in small town museums, libraries and lecture halls. He spoke our language and appreciated the chance to use it everywhere he went. He wrote great eulogies when others he considered his “partners in crime” went on before him. He appreciated his wife and the love they had between them, and his children and grandchildren. He appreciated the fact that every day is a blessing even when his health began to fail. Because of his capacity for appreciation, when I think of someone I would like to be more like, it is him.

And he was real. In his more personal essays, we learn about his feelings and motivations that most of us would keep more private, then feel the breakthrough that comes from honesty. In his book The Other California: The Great Central Valley in Life and Letters (1990, with an expanded second edition in 1994), which is a lovely sampler of what all his other writing was about, he ties us to the Kern County landscape through stories of his youth (“The Lake that Will Not Die,” about Tulare Lake, and “The Kern, My River,” both of which I love every time I read them.) But there’s also an essay about when he and his family bring his father home to live with them, despite the rough edges still left from his childhood. And in another volume, Coming of Age in California: Personal Essays (also published in 1990), he brings us full circle to the humans who made this landscape home for him: his father and mother, his wife, his friends from high school still friends in mid-life, two uncles, none perfect humans, all perfect specimens of humanity. In the foreword to this book, writer Floyd Salas confessed that he “was moved to tears by almost every piece… Haslam writes about those he loved and still loves, dead or alive, with a clear and honest eye… It is his naked honesty that strikes so deep, that makes me care so much.” I couldn’t have said it better.

I could have spent the entire column telling you how he’s helped me personally since I met him, but then you wouldn’t know how he’s helped you. He’s left us a treasury of perspective on this place that is true and valuable even now, three decades after much of it was written. If you have any shreds of homesickness in you, you’ll find a cure within his pages, no matter where you were born or what brought you here. Haslam’s passage through this place has left it better. The road he paved with his words will keep bringing us home for years to come.

Trudy Wischemann is a re-placed native of Washington making home in Lindsay. You can send her your settlement stories c/o P.O. Box 1374, Lindsay CA 93247 or visit www.trudysnotesfromhome.blogspot.com and leave a comment there.