Last week’s front page story on the UFW’s new march to Sacramento made me proud of our paper. It made me proud of the tradition of struggle against inequality and poverty created by industrial agriculture of which I am a part. I was impressed by the organization of the march, bringing in people from all over the valley as they follow the historic route taken from Delano to the state capitol in 1966.

That said, I was also saddened.

The first sorrow is that farmworker conditions have changed so little in 56 years that a 300-mile march of poor people is still necessary. The second sorrow is that we still do not understand the social, political, and economic necessity of the small farmers caught in the middle of this fight. Not understanding that the first time contributed to these farmers’ decline, and thus to the fact that now, more than ever, the farmworkers are fighting the big boys for their daily bread.

Although labor union organizing is far easier on large farms than at smaller operations, working and living conditions for farm laborers were better on the small farms. “The big guys didn’t care if we had toilets or water,” said a woman my age last month whose family had followed the crops in her youth. “But the small farmers, the ones with families of their own, would see that we had what we needed, even hook us up to their own electricity at night.” While that obviously can’t have been true everywhere, the general reality of it was urgent enough for her to come tell me after I preached one Sunday about the small-farm meaning of “vine and fig tree” in the Bible.

There are few people left who remember the fallout of the first march, when Cesar Chavez and Dolores Huerta led the way. I was not here to witness the effects, but I’ve heard stories from our local elders. Combined with the five-year grape boycott that began in 1965, flying the red flag with the black eagle’s blocky wings raised and spread was as polarizing and divisive to our rural social cohesion as flying the Confederate flag is today.

One of Lindsay’s esteemed elders, a farmworker who established his family in a home here and stayed, once told me that he regretted participating in that march. “It caused so much pain, so much division,” is what I remember him telling me. Admiring his courage, I was saddened to hear his regret.

Some of that pain was experienced in the churches. Rev. Dick Pitcher, who pastored the Lindsay Methodist Church when I arrived here in 1993, said that this church had been split in half by the support for farmworkers preached by their pastor then, Rev. Bill Dew. Most of its small orange growing families left the congregation and joined the Presbyterians, who were staying out of the mess. Small grape growers from Fresno to Bakersfield were decimated by the boycott, while the big boys like Gallo and Guimarra were left standing.

Rev. Pitcher understood the need for another approach, and his work in the community was one of the reasons I relocated here. After the 1990 Freeze, which rocketed him into action, he helped organize a bus trip from Tulare County to Sacramento to make our dire needs known at the state level. It deliberately included farmworkers, farmers and small businesspeople—those who were heavily impacted by the loss of the crop and damage to the groves. The trickle-up effects of that disaster were so clear that organizing people to come together was easier, I’m sure. But the truth of our interconnectedness, our interdependence, has not changed even if most of the participants have crossed the River Jordan by now. 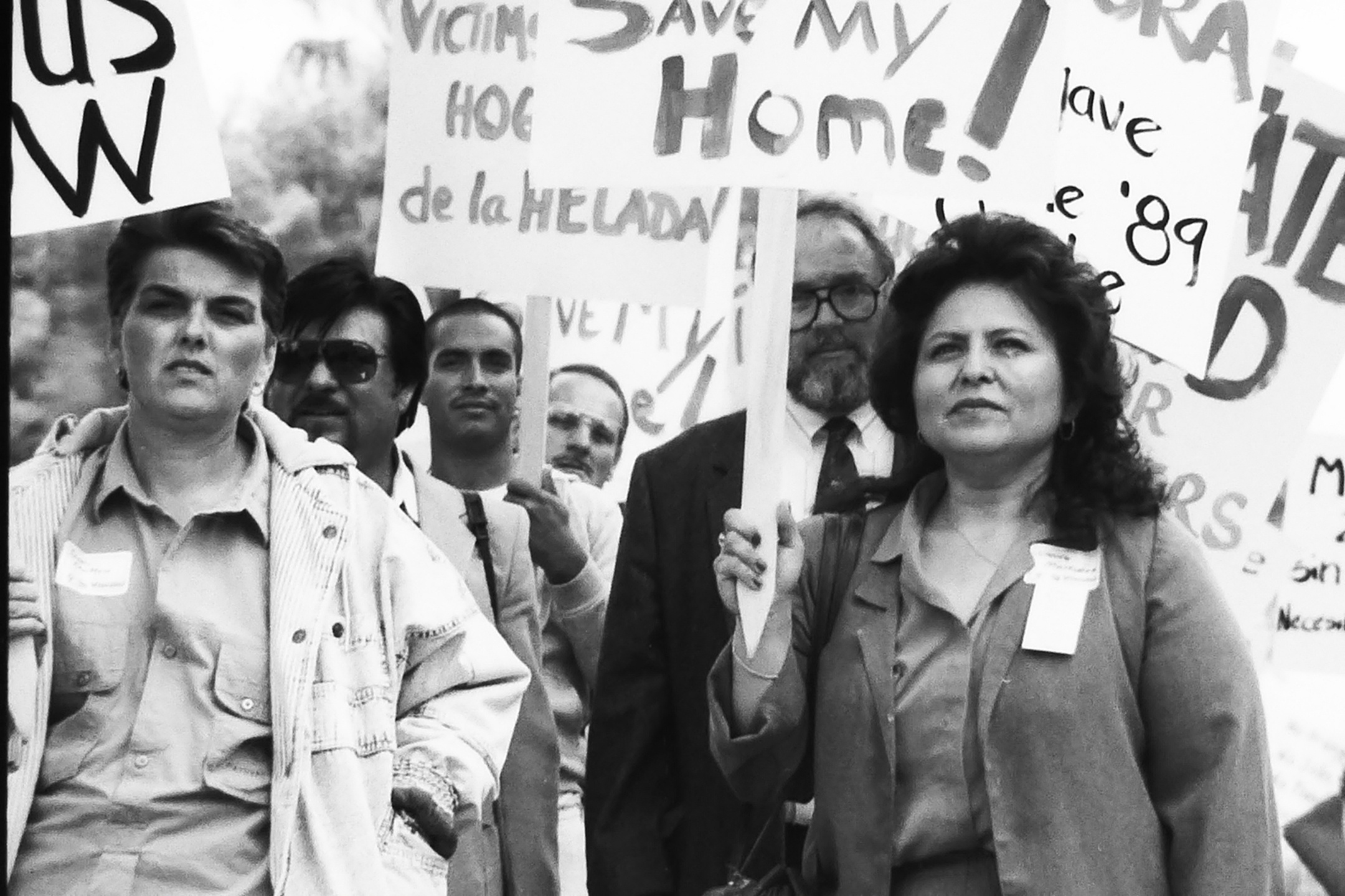 In Sacramento in front of the Capitol Building on April 29, 1991. Rev. Pitcher is pictured wearing glasses and a necktie. Photo submitted by Trudy Wischemann

Dolores Huerta herself once recognized the need to merge with small farmers. In 1972, as vice president of the UFW Organizing Committee testifying before a U.S. Senate Subcommittee on Labor and Public Welfare, she said “[We small farmers and farm workers] have so many problems in common and so many common interests that we should unite for our joint survival.” That still is the case, perhaps now more than ever, as water shortage and mechanization threaten to eliminate small farms as well as farm jobs.

I wish the marchers well. And I wish we could do this differently.

Trudy Wischemann is a long-time observer of crop-picking and crop-growing who writes. You can send her your farm observations c/o P.O. Box 1374, Lindsay CA 93247.

Trudy Wischemann
Local writer of the column 'Notes From Home'