Gardening Guru: Ants in the Garden

We’re relieved when ants stay out in the yard, as opposed to parading through the kitchen. But are ants in the garden a good thing?

Ants are a food source for birds, eat other insects and help with the breakdown of plant and animal remains. They move and aerate soil and carry seeds underground, dispersing them to create new plants.

Ants also have less desirable qualities for the gardener and our plants. Harvester ants can give the gardener itchy stings. Red imported fire ant stings can cause welts and serious reactions in some people. For our plants and trees, they have a number of bad habits.

Ants will chase off beneficial insects, such as ladybugs and lacewings and their larvae, which are predators of plant pests. This behavior is to protect a honeydew-producing pest so the ant can have the honeydew as a food source. This can mean an increase in aphids, scales, whiteflies, mealybugs and psyllids on the plant or tree.

As plant pests such as aphids, scales and psyllids feed on the plant leaves, they become so full of plant sugars, they excrete the excess, which is the honeydew. When the ants come to feed on the honeydew, they also will “protect” the scale or aphid by attacking other insects that would normally attack the pest. With fewer natural predators, the “bad” bugs grow in number, resulting in more honeydew production. Honeydew on the leaves makes the plant more prone to sooty mold fungus. Especially during the stress of summer heat, the sooty mold inhibits transpiration and chlorophyll production by the leaves. These bad bugs also can carry fungal, bacterial and viral diseases from plant to plant as they feed.

Learn about ants to reduce their bad qualities

Ants are social insects that live in very organized colonies with each ant born into their role for life. When they aren’t causing problems for us, their work ethic is pretty impressive. The queen lays eggs and does some care of the larvae. The worker ants are the majority of the colony, gathering food, caring for the larvae, building tunnels and defending the colony. Ants usually nest in soil, near a food source and moisture. Argentine ant nests are most often just below the soil surface. Ants are most active starting in Spring, increasing in July, and less active after October. They will use irrigation piping as a convenient highway.

Ant species outdoors in our area include Argentine ants, pavement ants, velvety tree ants, thief ants, harvester ants and red imported fire ants. Some species, such as carpenter ants, pharaoh ants, odorous house ants, thief ants and Argentine ants, will also be found indoors in their search for food. Some ants prefer mainly sweets, others are also attracted to proteins or grease. The carpenter ant’s food is sweets, their name comes from creating nests in wood.

Management of ant invasions in trees and plants

Exclusion of ants from their food sources includes the use of barriers, such as mulch around trees and shrubs, which slows down the ant’s movements, and sticky products which block the ant’s path. To avoid injury to the tree, these very sticky ointments must be applied to a piece of tree fabric or duct tape which is wrapped around the tree trunk.

Check for leaky faucets and sprinkler heads which attract ants seeking water. Keep lower tree branches off the ground and clean up any fallen fruit regularly.

Foraging ants can be killed by soap and water, window cleaner, or insecticide, but this will not stop the colony from continuing to follow the scent trail of the previous workers. Application of insecticides also reduces the number of beneficial insects who consume plant pests.

Ant bait stations provide an insecticide mixed with a sweet material to attract the worker ants. The ants carry small amounts of the bait back to the nest and ultimately it can kill the entire colony. The bait works slowly, so the workers feed it to the rest of the colony before they die. Bait stations can be purchased ready to set out or in larger refillable stations. The ant’s bait preferences can vary over the season, so try a different product if the problem continues. Check the station regularly as it can dry up in the heat or become rancid. Avoid using insecticidal sprays when using the bait station. Place the station near the ant trail, but not where children and pets can easily reach it.

A good practice to avoid introducing plant pests into your garden is to isolate a new plant when you bring it home. Observe it for at least a day, check the soil, underside of leaves and stems, branches and trunk for any unwanted hitch hikers. If you find eggs or insects, check UC Gardening and Pest Information for identification and management ipm.ucanr.edu/PMG/invertebrates/links.ants.html. Pest Note 7411 has detailed information on ants. It includes identification, life cycle and habits, a picture gallery of species, damage and management practices. The publication also covers coping with ants that have invaded the house and methods to reduce their chances. Imported red fire ants sting aggressively and can be dangerous to people and pets. See UC Pest Note 7487 for details on identification and recommended management.

Effort is worth your time

It does take persistence, but ant invasions into plants and trees can be reduced to manageable numbers. The benefit of this effort is a reduction in many other plant pests, such as aphids, whiteflies, scales, psyllids and mealybugs. Without the competition of ants, beneficial insect predators can help with pest cleanup. Diseases such as sooty mold and viruses spread by leaf feeding insects will be reduced also.

The Master Gardeners will be available to answer your home gardening questions at a few limited sites in the near future: Luis Nursery in Visalia on Nov. 14 from 10 a.m to 2 p.m.; and at the Lindcove Citrus Tasting event in Exeter on Dec. 11 and 12. Master Gardeners can be contacted at 559-684-3325. Or visit their web site at ucanr.edu/sites/UC_Master_Gardeners. 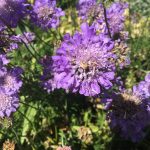