Invasive Plants in Our Gardens

I am a gardener. I love to spend time in my yard planting, nurturing, and photographing my plants. If a new plant appears that I have not planted, I watch it to see what it looks like and what it does. That is how I discovered invasive plants. They appear out of nowhere. They look pretty! And then, they take over!

Invasive plants are a problem when they replace native species that support wild life. They can cause harm to the environment, our economy and our health. Invasive plants can get established easily, but are not as easily removed. Most of the plants we use in our gardens and landscaping do not escape and invade the wildland areas. But some do. They can crowd out native plants, insects and animals, clog waterways and lead to increased flooding, fire and crop loss. They can change soil fertility, stabilize sand dunes in areas adapted to constant flux, and promote soil erosion. Invasive species are a leading threat to biodiversity, second only to habitat destruction. It is important to know what plants are invasive in your area so you can avoid planting them.

An invasive plant is not just a weed. A weed is a plant that is growing in a place where it is not wanted. But an invasive plant infests a natural ecosystem, such as a wildland, rangeland, pasture or waterway. They are much more problematic because of their ability to establish, disperse and spread without human assistance.

Invasive plants have been introduced in various ways. Sometimes they are brought in accidentally, attached to hulls of ships, or carried in shipments of grain. People can unintentionally spread invasive species with their vehicles, boats, equipment and clothing.

Sometimes invasive plants have been introduced purposely without understanding the potential consequences. This occurs with plants used for erosion control, livestock forage, aquarium and garden ornaments, and sources of food.

Here in the San Joaquin Valley there are a few species that are in the invasive species category. I will introduce you to a few of them.

Periwinkle (Vinca major), also known as bigleaf periwinkle, is a fast-growing, competitive plant that forms dense mats of growth. These mats crowd out other plants and degrade animal habitat in infested areas. Riparian areas are especially susceptible to periwinkle, where the far-flung vines crowd out native vegetation. It is also a known host to the bacterium that causes Pierce’s disease, which is a deadly disease to grapevines.

Mexican feathergrass (Stipa/Nassella tenuissima) is a great example of a grass that is native to one part of the U.S. but invasive in another. Deceptively beautiful, it is a graceful, delicate and fine textured ornamental grass. Mexican feathergrass often self-sows abundantly and may spread out of its designated place in the garden, giving gardeners more work and possibly giving your neighbors plants they don’t want. It forms dense stands that thrive in dry areas, increasing the fire hazard. Fire simply enhances seeding and does not get rid of the plant.

The Russian olive (Elaeagnus augustifolia) is a problem in our riparian areas. It out-competes the native cottonwood. These stands of Russian olive provide lower habitat quality, and fewer species of birds are found in these trees than native riparian vegetation.

Yellow Water Iris (Iris pseudacorus) has beautiful yellow flowers, but is a problem in wetlands and along riverbanks. It out-competes native vegetation and degrades native fish habitat as well as bird nesting and rearing sites. All parts of the plant are toxic to livestock and other animals. It reduces the carrying capacity of wetlands for water storage, and blocks irrigation flow and flood control ditches. It is difficult to eradicate because it spreads by rhizomes (underground stems), which can sprout new plants if they break off.

Wooly or common mullein (Verbascum Thapsus) occurs throughout California and is particularly abundant in meadows, creek drainages and disturbed areas. It is a host for insects that are economic pests. Seeds can survive in soil for 35 years or more.

Buttercup oxalis (Oxalis per-caprae) is found in dunes, scrub, oak woodlands and in gardens. It forms bulbs, making it difficult to control.

Tree of heaven (Ailanthus altissima) is a tree that forms dense thickets which displace native species and can invade fields, meadows and forests. It is tolerant of poor soil and can even grow in cement cracks. It causes habitat damage in disturbed forests and forest edges. It is very difficult to get rid of where it is not wanted. 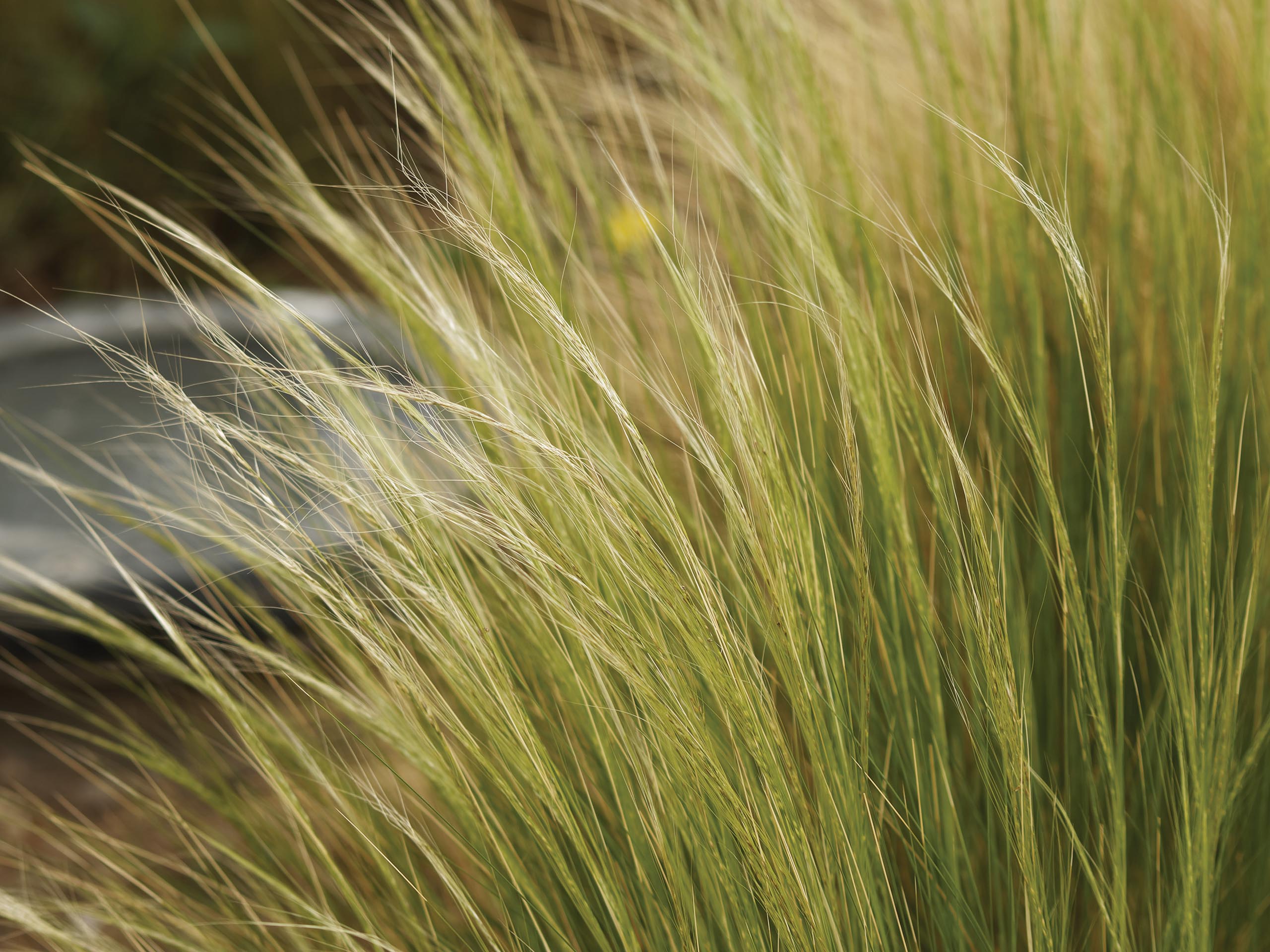 Although beautiful, the invasive Mexican feathergrass often self-sows abundantly and may spread out of its designated place in the garden.Adobe Stock

These are just a few of the plants that are invasive in our area. A more complete list can be found at the web sites listed at the end of this article. I have listed ones that are found in the central valley and common in California in general.

What I have learned in my own garden is that plants that appear out of nowhere are not necessarily invasive, according to the definition. They do not impact the ecosystem of wild lands or water ways. They have shown to have invasive habits. They spread easily and intrude on other areas. But strictly speaking, they are not invasive.

Onion weed (Allium triquetrum) appeared in my front yard several years ago. At first, I liked it. I thought it was a lily of the valley because I had actually planted lily of the valley. But the onion weed has the scent of an onion and so they do not make a nice cut flower. Each year they spread more and more until they were even coming up in our lawn. They have small walnut sized bulbs that were very difficult to remove. I am still finding them, years later.

Wild strawberry (Potentilla indica) arrived in my back yard in a dry shady area that I had a hard time finding the right plants for. It makes a pretty ground cover and produces pretty yellow flowers and little red berries. It spreads like crazy and I am currently just trying to control it. I haven’t tried to take it out.

Just this week I found a little oak tree in my front yard. I am puzzled about where it came from and I am leaving it for now but it is probably going to be too big for our yard.

In summary, most of us with our city properties should still be concerned with invasive species and need to be careful not to buy one in a nursery or from mail order, as they can still spread out of control. But if your property borders on farmland, pastures, wildland or riparian areas please be extra vigilant that you are not spreading invasive species into those areas. For a list of plant suggestions that have the same look as an invasive species, visit plantright.org/about-invasive-plants/plant-list.

Due to the shelter-at-home guidelines, the Master Gardeners have canceled all public events for the time being, but their phone lines are still open: 559-684-3325, Tuesdays and Thursdays between 9:30 and 11:30 a.m. Or visit their web site at ucanr.edu/sites/UC_Master_Gardeners.