Top of the league 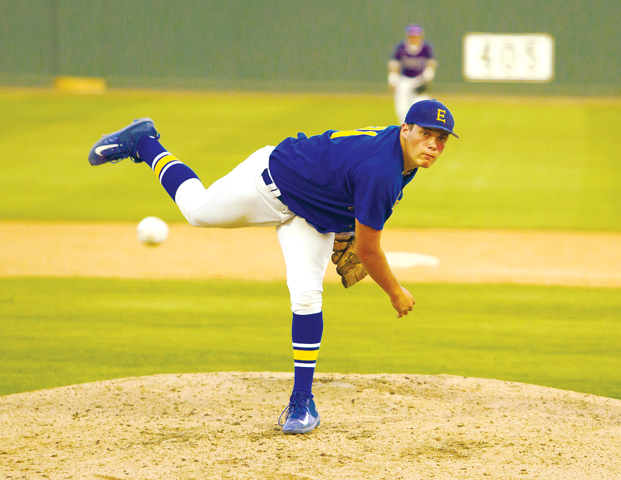 After the graduation of Tyler Rumbaugh in 2016, Exeter’s Seth Guinn entered his senior season as the Monarchs’ top pitcher. With that in mind, Guinn set his eyes on being one of the best pitchers in the CSL. Guinn received the CSL’s recognition as most valuable pitcher along with Central Valley Christian’s Trenton Vanderveen.

“It was something that I looked forward to,” said Guinn. “This recognition means a lot to me.”

During Guinn’s senior season he led the team with a 9-2 record in 12 starts. Guinn pitched a total of 77 innings, in which he struck out 63 batters and finished with a 1.73 ERA — not surprising numbers considering that he grew up a neighbor of Rumbaugh.

“We used to go out and play catch as kids all the time,” said Guinn.

While, this past season was the one that Guinn got the recognition, the start of his varsity career kicked off with a bang. The first game of his junior season Guinn pitched a complete game no-hitter in a 9-1 win over the Mendota Aztecs. In the game Guinn struck out six while only walking two Aztec batters.

That would have been a performance that Guinn would have wanted his grandma to see. Unfortunately, Guinn’s grandma passed away on the same day that Guinn took the field for the first time in his life.

“Each game that I play is one that I’d hope she’d see,” said Guinn.

Next season Guinn plans on competing for the College of the Sequoias.

The Lindsay Cardinal who received the most valuable player (MVP) recognition of the East Sequoia League (ESL) was Danielle Jauregui. This season, Jauregui’s pitching was crucial to the Cardinals’ 14-1 ESL Championship run.

“This honor means a lot to me,” said Jauregui. “Being a pitcher on the team made me feel like a leader.”

Last season, Jauregui went a perfect 8-0 from the mound. All of her six starts were complete games and she got two saves as well. In the 42 innings that Jauregui pitched, she struck out 35 opposing batters.

Despite this year’s performance, Jauregui did not start out believing she was leadership material. She overcame some shyness to make the varsity team her freshman year. But that shyness caused her to go with the flow of the team instead of helping to shape it.

“I just did not want to seem like I was coming in as a freshman and taking over the team,” said Jauregui.

However, the coaching staff saw something in her that Jauregui did not yet see in herself and pushed her to become the leader she is today.

“That was something that I just had to get over, and my coaches helped me do that,” said Jauregui.

There is no doubt that Jauregui will be as instrumental in her senior season as she was in her junior season as the Cardinals go for two ESL titles in a row.

The only position that the Lindsay Cardinals’ Sierra Torres did not play this season was pitcher. That made her one of the most versatile players in the entire ESL; thus, she was named utility player of the year.

“It was kind of crazy because at the beginning of the year I was kind of stand-offish,” said Torres.

This was Torres’ second year on varsity but the first that she was actually starting the majority of the season. The fear that she’d mess up and the team would blame her was almost too much for her to bear. Instead, the team gathered around Torres and built her up.

“Being surrounded by all those girls really pushed me to do my best,” said Torres.

During the 2017 season, Torres made appearances in 15 games for the Cardinals. In those games she had a batting average of .562. Of her 36 hits, 16 were for extra bases including a triple and a home run. Torres also drove in 28 RBIs.

Next season, Torres will be a senior and while a repeat as ESL Championship will be nice Jauregui is chasing an even bigger prize: a Valley Championship ring.