VISALIA – Despite no senior football season due to the ongoing pandemic, Eutimio Pena’s football career is far from over. He’s committed to play at the next level, and needed only three years of experience to do so.

Pena’s first year of playing organized football was on El Diamante High School’s freshman team, and now four years later he is committed to play at Arizona Christian University (ACU) after receiving 14 other offers. After officially signing on Jan. 21, he had his signing day ceremony on Feb. 4 at The Potter’s House Christian Fellowship Church of Visalia where his father, Tim Pena, is the pastor. 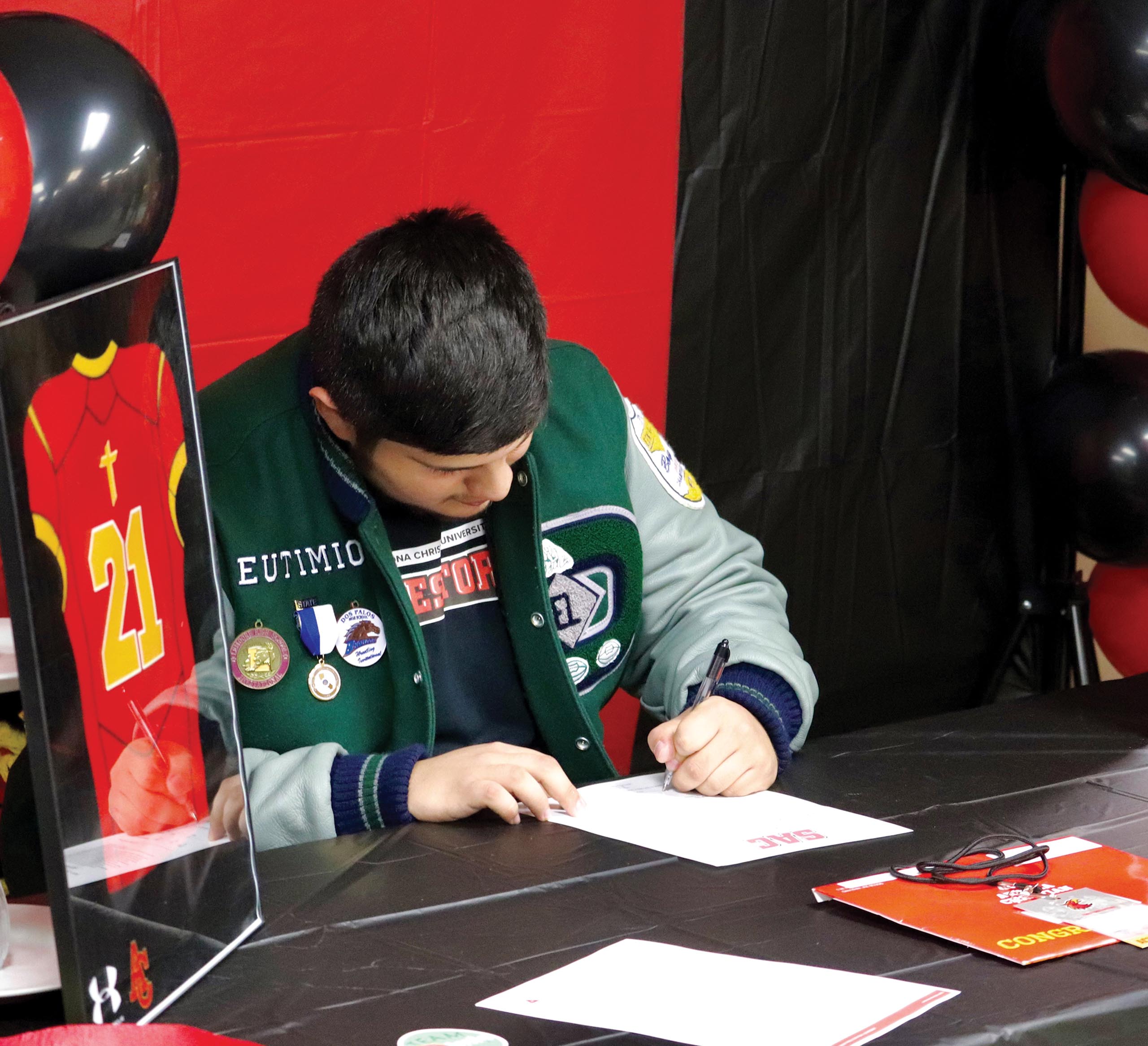 Eutimio Pena signed his national letter of intent on Feb. 4 at The Potter's House Christian Fellowship Church of Visalia.Submitted photo

His freshman season did enough to impress the coaching staff at El Diamante as he was a varsity starter on the offensive line the following year. His development continued at an accelerated pace as college football programs began reaching out to Pena after his sophomore season. Despite his limited experience, that first email is when he finally realized that he could realistically live out his childhood dream of playing at the next level.

Although it was an underwhelming season for the Miner team as a whole that went 1-9 under a brand-new coaching staff, things began coming together for Pena during his junior year. The offensive guard credits both the old and new coaching staff for helping him learn the fundamentals of the game while honing the proper techniques of playing in the trenches.

Pena’s play during his junior year turned the heads of several Division III and NAIA football programs. He wrestled during his first two years but decided to hang up the singlet as a junior to focus on his recruitment. The lineman was on track to have another dominant season to close out his high school football career as a senior, but unfortunately it didn’t happen as the Visalia Unified School District (VUSD) decided to cancel this year’s football season due to the ongoing pandemic.

“The day they finally announced it, I ended up going to my room, locked myself in there and tears started coming down my face. I will never be able to play with my guys ever again,” Pena said. “There’s no more El D football for me and that’s not how I wanted to end my senior season.”

All wasn’t lost as Pena was invited to play in the All-American Bowl with various players from around the country at AT&T Stadium, home of the Dallas Cowboys, which took place in January. They were impressed by his performance as he was invited back to play in the All-American Bowl Championship on March 14 at Nissan Stadium, home of the Tennessee Titans.

The ongoing pandemic also had Pena worried about his college recruitment. Things started out very slowly as he didn’t get his first offer letter until late July and he was worried that he wouldn’t receive any more offers.

After a lot of email exchanges, Zoom meetings with coaches, and even one coach from Wisconsin making a home visit, Pena finally decided on a school. Several factors played into his decision to attend ACU including the proximity to Visalia which would allow his family to attend games and he could come home when needed. As a kid who was raised in church and is the son of a pastor, Pena also appreciates ACU’s strong Christian values. The school is also about 100 miles from The Potter’s House Christian Fellowship headquarters in Prescott, which is the fellowship Pena’s home church in Visalia is a part of. He and his family normally attend a large conference there twice a year, and so they’re more than familiar with the commute down to the Grand Canyon state.

“My faith is basically my life,” Pena said. “I wouldn’t be where I’m at without God’s help because he’s provided me with so many opportunities that I wouldn’t have had without all of the answered prayers.”

Occupation wise, Pena will be working to become a physical therapist while at ACU. But he’s also not ruling out the NFL, even if it’s just as a member of a team’s practice squad. Nonetheless, as a kid who just started playing football a few years ago, the first chance he’ll get to play on Saturdays will be a dream come true.