Lindsay defeats Woodlake 19-12 as both teams open their season

WOODLAKE – When Casey Higginbotham was named new varsity head coach at Lindsay last March, he had no idea that it would take a full year before his first game. After multiple season delays and a cancelled game last week, Higginbotham and the Cardinals were victorious in their first game of the season in a close battle with the Woodlake Tigers.

The two teams had to shake off the rust as it took both offenses a few drives to get into a rhythm. Woodlake had the game’s first possession which ended in one of their four interceptions on the night. After trading possessions, Lindsay got on the board first off a 27-yard touchdown pass from senior Randon Gomez to junior Richard Diaz to go up 6-0. Conversions were a struggle for both teams as Lindsay only completed one of their three. 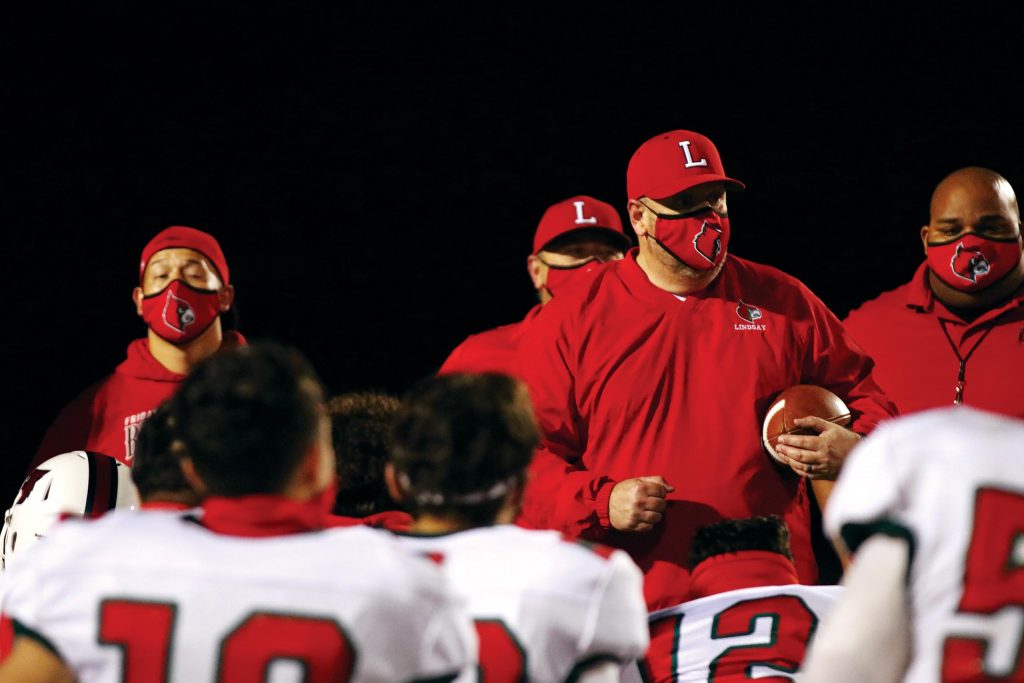 After giving up a touchdown, the Tigers followed up with a strong drive of their own led by two big catches from seniors Luis Lopez and Hector Magana. A red zone interception ended that drive followed by a fumble on their next drive as they trailed 6-0 heading into halftime.

Both teams traded possessions to begin the second half and Lindsay’s defense came up with their third interception of the night. Three personal fouls on Woodlake gifted the Cardinals a trip to the red zone that ended in a second touchdown connection between Gomez and Diaz, which put them up 12-0 midway through the third quarter.

Woodlake’s offense finally got on track and put together a strong scoring drive that ended in a touchdown run from senior Jimmy Valdez. Despite a failed conversion, the Tigers were back in the game as they trailed 12-6 with a little more than a minute remaining in the third.

The one possession game didn’t last long as Lindsay immediately responded with a score of their own. Senior Matthew Morales earned the run of the night with a 40-yard scamper into the end zone. He showed off his speed and agility by making several defenders miss before turning on the jets for their final score of the night, as the Cardinals went up 19-6 to close out the third.

The Tigers were not done fighting as they put together another scoring drive which ended with Magana catching a short slant into the end zone. They trailed 19-12 with plenty of time remaining in the final period. Woodlake had two more opportunities to tie or take the lead, but their first ended in a turnover on downs. They put together another strong drive with less than three minutes to go, but threw a crushing red zone interception which sealed their fate. Despite playing with about half the number of players compared to Lindsay, Woodlake had their opportunities to seize the game but limited themselves with several key turnovers.

“We came out super slow, started to get some momentum, then we shot ourselves in the foot with a fumble or interception,” Woodlake head coach Jeff Johnson said. “One thing I was proud of is that there were some times where we could have broke, but we kept fighting, competing and stayed competitive.”

Lindsay was scheduled to have their first game of the season two weeks ago at home against Farmersville, but it was cancelled due to COVID-19 safety protocols at Farmersville High School. Despite the rain, they still decided to hold an inter-team scrimmage. Higginbotham believes that the unpredictable offseason prepared his guys to stay strong during a close game against an athletic team like the Tigers.

“The stop and go made these kids tougher. We were going then we were stopping and then last week we were going and then we had to stop,” he said. “But they haven’t stopped since last June, they’re still fighting and I didn’t lose any bodies as we have almost 40 kids.”

The Cardinals will travel to Corcoran tomorrow at 6 p.m. Woodlake will have a week off before traveling to Farmersville next Friday, April 9 at 6 p.m.