EXETER – Until last Friday Darin Lasky was always the bridesmaid but never the bride. Then Madisson Woods scored two goals to beat the Central Valley Christian Cavaliers in the Division IV Valley Championship.

As Exeter girls soccer head coach, Lasky had visited the Valley Championship three times before Friday night. Each time he and his squad were turned away with second place. And after falling behind 1-0 in the 16th minute there was not much certainty they would pull this one out. But fter tying it up, and then pulling ahead in the first overtime period, the entire team played with the winds of victory at their back. Which says a lot given that they almost missed the entire season to begin with.

“You know, this year, [this win] means a lot because we started with 12 girls,” Lasky said. “And we have 19 now and we’re in the valley title game…We talked about how we covet culture, we don’t covet championships. This is what culture gets you.”

Woods couldn’t be a better illustration of the Monarchs’ culture.

The best stories in sports always start with a challenge. Exeter’s challenge was overcoming a series of errors that led to CVC’s goal in the 16th minute. Not only did Kaylee Nelsen miss the ball as the last line of defense, but the goalie overran it and let it slip by. That left a wide open net for CVC freshman Sophia Marroquin.

The rest of the half Exeter’s defense tightened up and denied another score. Unfortunately, the Monarch offense wasn’t generating enough shots to tie. 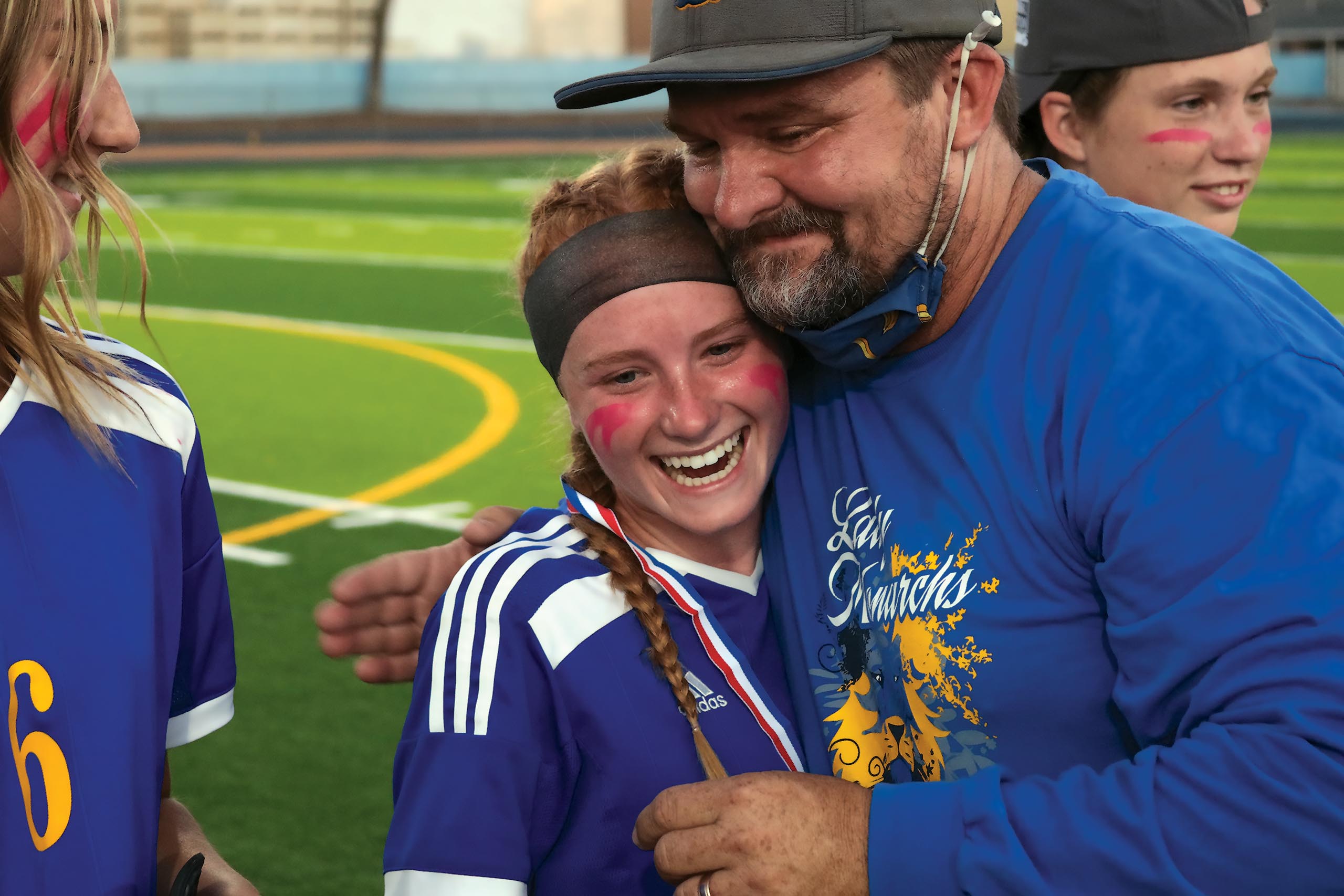 Exeter came roaring out of halftime with fierce attempts to put the ball through the net. But both teams traded shots on goal without much success. The Monarchs’ best shot was in the 59th minute during a free kick but it was blocked by a wall of Cavaliers. A short water break in the 60th minute gave Exeter new life.

Two minutes later Woods got her shot to dribble down the field and work her way through a defender. When the Cavalier goalie showed up to smother Woods’ attempt, all three players collided, while the ball’s momentum carried forward. Without anyone on their feet to stop it, the ball rolled into the net and Exeter’s sideline and fans exploded in celebration.

“It’s very common for me to collide with goalies, like it’s just something I do a lot,” Woods joked. Despite the hit, the goal breathed confidence into Exeter players. “It was just like full of excitement and just lit a fire under me to just keep going, like we got this.”

A lot of effort was put into the final 20 minutes of regulation, and with it, a lot of injuries. Throughout the match players were constantly hitting the turf. Worse yet, for Exeter, their leading scorer America Lopez was grasping her ankle and limping to the sideline.

Before overtime Lasky and the coaching staff gave her a rousing speech.

“I told her that, ‘you need to change the game. You need to find something you’ve never found before for 20 more minutes,’” Lasky said. “And I told her ‘It’s not as bad as it feels, and it’ll feel a lot better when you win.’”

In the first three minutes of overtime Lopez broke free to take her best shot on goal all game. While the ball gotten past the goalie and headed for the bottom corner of the net, it missed just wide. It was three minutes after that when the team erupted.

Woods jockeyed her way into an open position when she had the ball passed to her feet. Without much room for a windup, she threw her leg into the ball and fell to the ground hoping for the best. Watching the ball roll past the goalie and into the net sent the entire team screaming.

The consummate professional Lasky gave credit to his opponents by the end of the game. He said that CVC—a Central Sequoia League opponent—had sharpened his team’s skills.

“They’re a well coached team. Jacob is a beast of a coach…We’re a better soccer program, because when you chase champions like that, and you’re always up against them, you’ve got to get better or you never beat them,” Lasky said.