STRATHMORE – The tale of the 2021 Strathmore girls basketball squad will live on for decades. Not only did they cruise through Central Valley competition, they took their game to new heights during their journey to becoming Division 5-AA Southern California Regional champions.

Although it will officially go down as a Regional championship, the Spartans are claiming the title of state champions. The Northern California Regional tournament did not take place this year, so the Spartans went as far as they could possibly go. 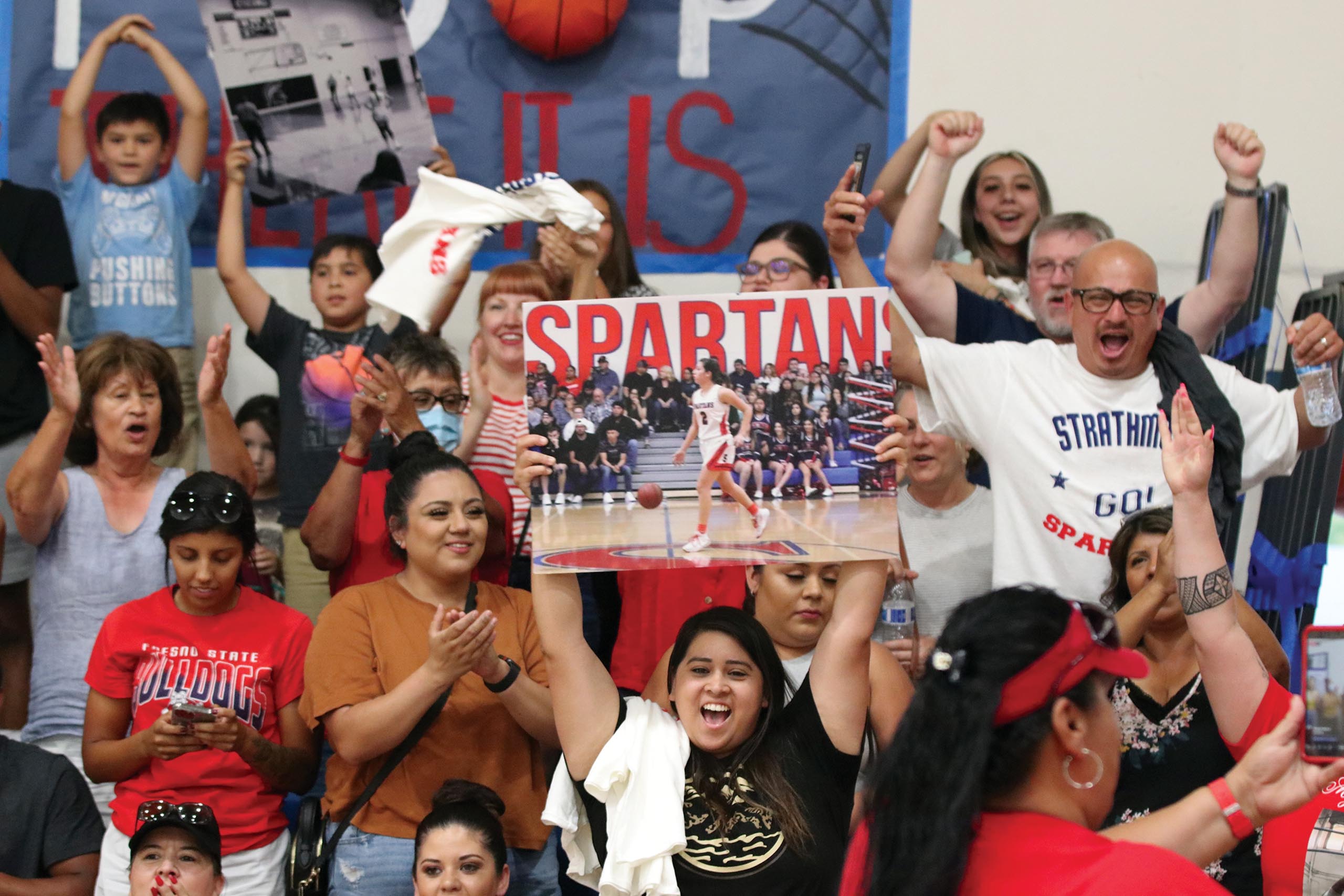 Jazmine Soto practically had her own cheering section at home complete with family members, friends and no shortage of elaborate signs of herself on the court.Photo by Jermaine Johnson II

As the No. 1 seed in the Valley playoffs and No. 2 seed in the Regional playoffs, Strathmore enjoyed home court advantage for their entire post-season run. After traveling over 250 miles, the Fallbrook Warriors gave the Spartans their biggest test of the playoffs so far. Star senior Jazmine Soto flirted with a triple double in her last high school game, finishing with 42 points, 9 rebounds and 8 steals. She struggled early from the field and missed her first seven shots. That forced the Spartans to rely on their defense, which has been their biggest strength during the playoffs.

Head coach Richard Miranda preached to his team that the game would be won or lost in the fourth quarter, and that is when both teams gave their best performance. Soto scored 19 of her 42 points in the final period, while scoring or assisting on nearly all of the team’s buckets.

Her ability to still control the game despite a slow start is evidence of Soto’s growth as a player over the last 16 months. Her struggles from the field during last year’s Valley Championship loss to East Bakersfield had a major impact on her confidence during that game, but this year was a different story.

“Last year I was getting in my head a lot and once I got in my head, I’d pretty much be done. I’d be pouting and playing really sluggish. And now it’s like I know I can’t do that because I have a team that looks up to me,” Soto said. 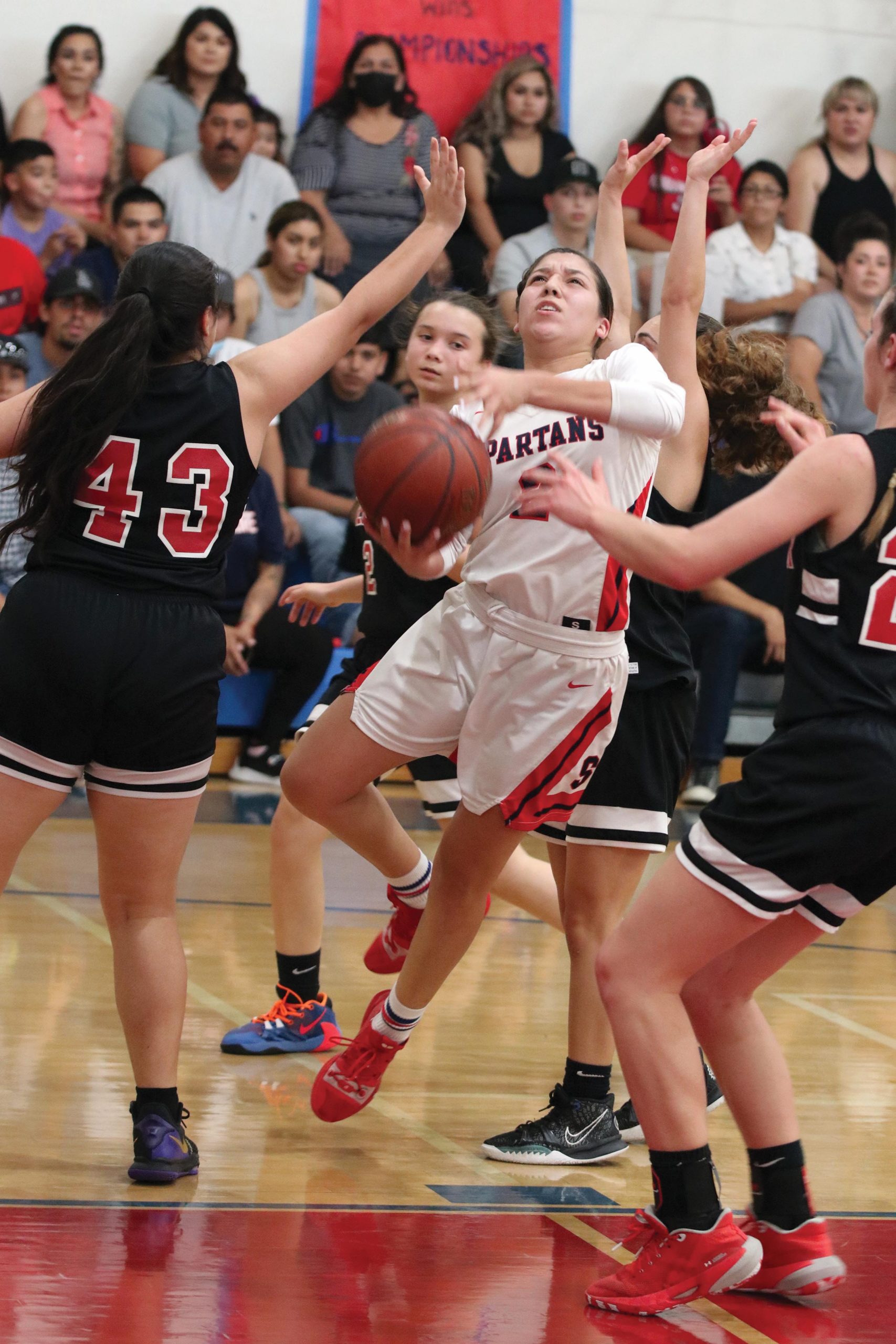 Jazmine Soto ended the championship game with a near triple double, putting up 42 points, 9 rebounds, and 8 steals. She saved her most productive quarter for the last where she scored 15 points alone.Photo by Jermaine Johnson II 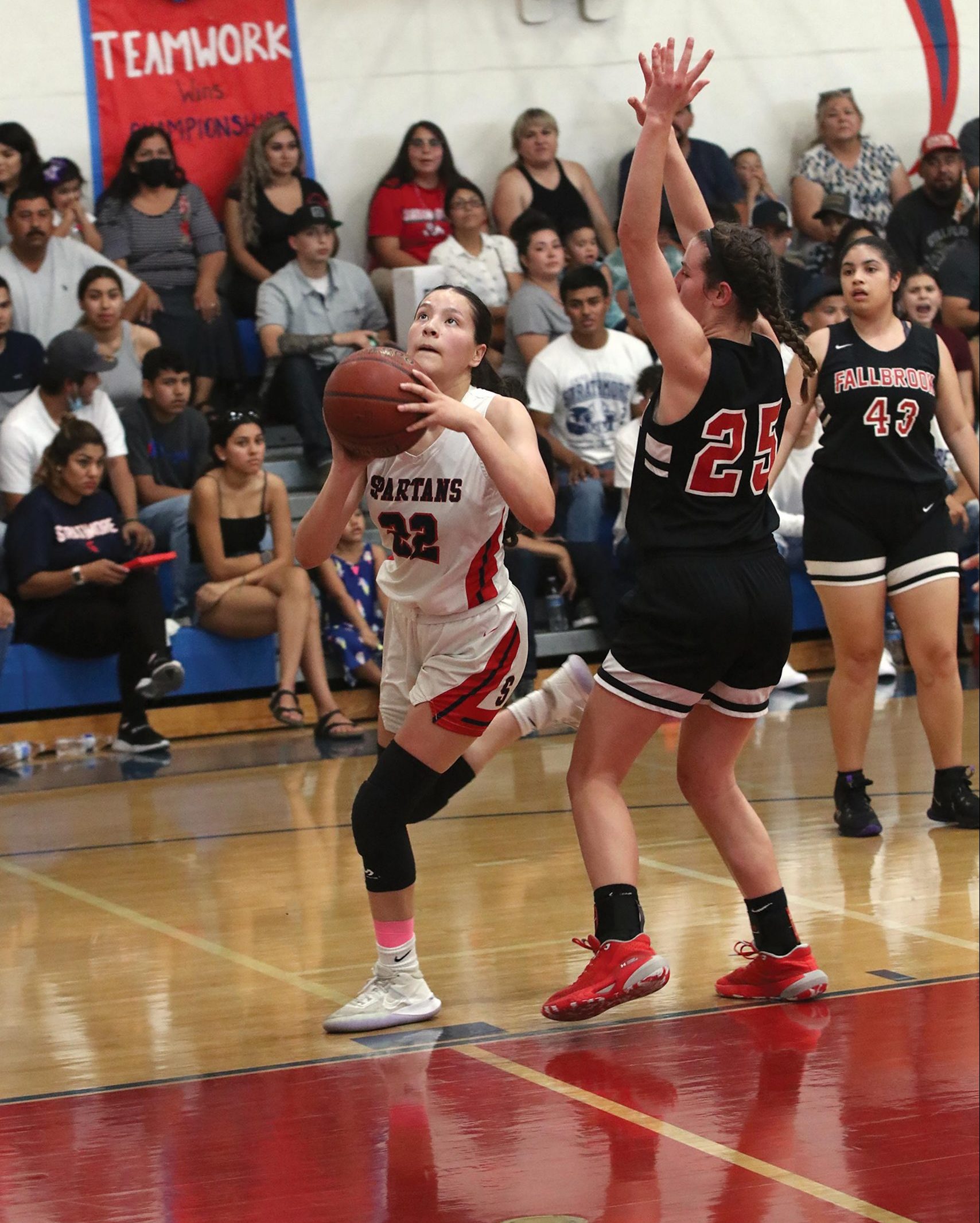 Joseli Gutierrez drives the lane for a layup.Photo by Jermaine Johnson II

The biggest test for the Strathmore defense was containing the other team’s star player, junior Naiya Kurnik who averaged 20 points and 7 rebounds per game this season. They held her to 15 points, 9 coming in the final period, which led to compliments from the Fallbrook coaching staff.

“The coach told me that Joseli Guttierez played a hell of a game on his number one player Naiya. He said he’s never seen anyone stop her,” Miranda said.

There were no easy shots on either side of the court as Strathmore led 10-7 heading into the second quarter.

It’s hard to contain a player as good as Soto as she eventually broke out of the slow start to end the first half with 15 minutes. Fellow senior captain Yvette Gutierrez pitched in six points, all scored in the first half, to help shoulder the offensive load. She also finished with 9 rebounds, 3 assists and a steal and was vital to the Spartan’s success all season as their other main ball handler.

A 14-3 run in the second period gave Strathmore a double-digit lead, but a few sloppy turnovers led to easy points for the Warriors who cut the score down to 28-21 heading into halftime.

Fallbrook was fired up when they came out of the locker room and used that fuel to cut the lead down to two points. To halt the comeback attempt, Strathmore junior Sherrie Chapa converted an and-1 to fire up the small but packed Spartan crowd. She has been a dominant force in the paint all season and finished the game with 9 points, 9 rebounds, and 1 block. Soto closed out the quarter with a pair of free throws, a steal and tough fast break layup which helped push their lead back to nine points heading into the final period.

Of the teams that track their stats on MaxPreps, Soto finished the season as the state’s leading scorer and the third highest scorer in the nation with 833 points. She also finished with the most steals in the state with 151. She broke the Central Section career scoring record during the regular season and has been adding to it since then. As she heads off to play at Holy Names University next year, she ends her high school career with 3,331 points which is tied for No. 6 on California’s all-time scoring list for girls basketball, according to Cal-Hi Sports.

The Regional championship was win number 306 for Miranda as a head coach. According to Central Section historian Bob Barnett, Miranda is only the 13th coach in section history to surpass 300 wins. His final message to his team was to enjoy the moment.

“In 20 years, you’re going to have kids and you’re going to come back and hopefully I’m still here. I might be in a wheelchair but I’ll still be there stomping my feet. And you guys will still remember and be talking about this,” Miranda said to his team.