TULARE – Mission Oak’s first full season under new head coach Michael Machado is off to a soaring start. In Tulare County’s first football game of the 2021 season last Thursday, the Hawks defeated the Madera South Stallions 36-14 on the back of senior quarterback Michael Iriye’s five touchdowns.

For the Mission Oak seniors, several of them were around when these two teams last met. The Hawks had their 2019 season ended by the Stallions in heartbreaking fashion, as they lost 35-34 in overtime in the playoffs. That added a little extra fuel to fire as these two teams met again to kickoff the season. 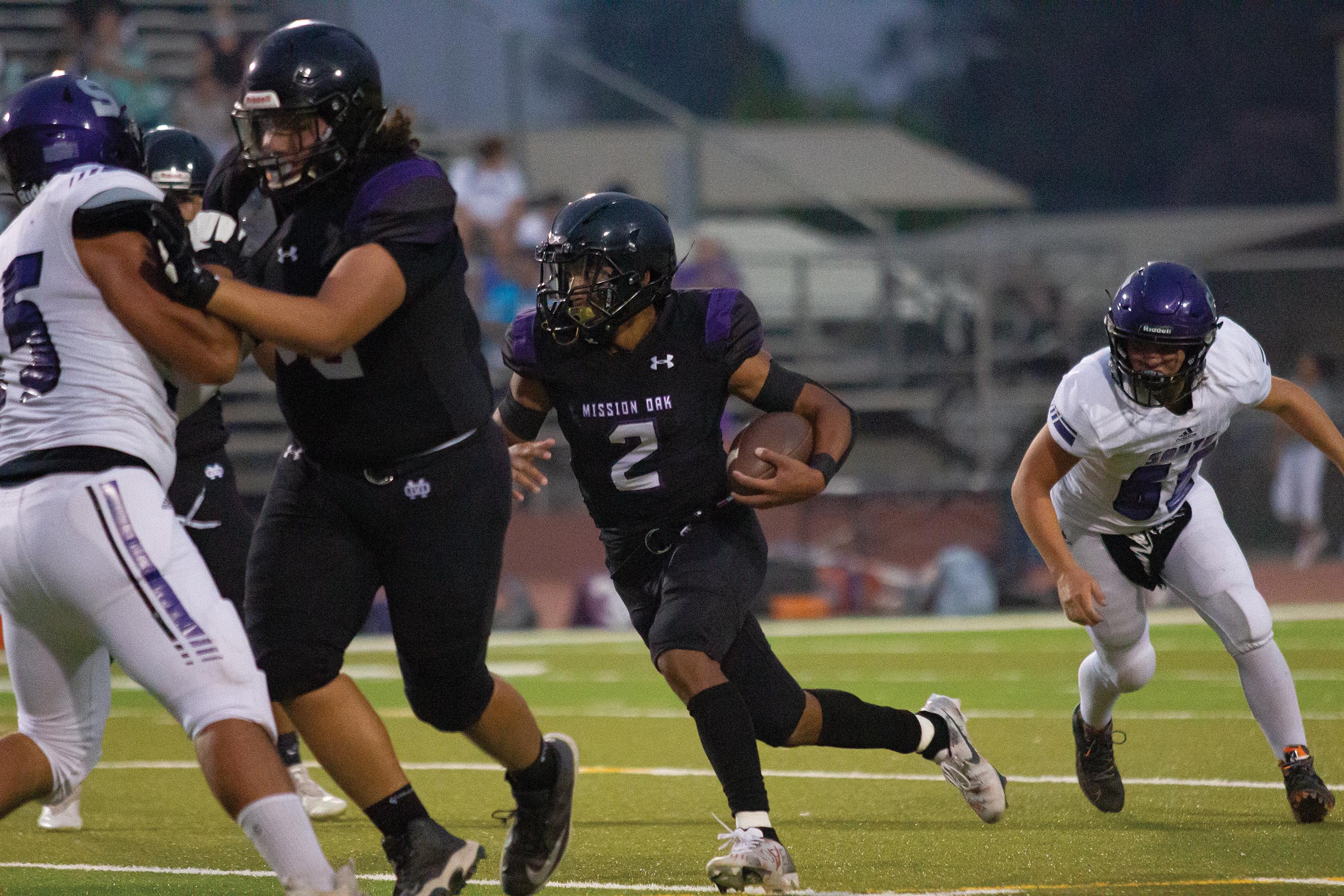 Less than half the teams around the county had the opportunity to play a condensed season in the spring. The Hawks were one of those teams and were one of the biggest benefactors as they had a chance to gel under their new head coach. It showed in their season opener as their high flying offense was unleashed against the Stallions.

Less than two minutes into the game, the Hawks scored the game’s opening points following a 59-yard touchdown between Iriye and receiver Kenny Jackson. The incoming sophomore transfer from Central Valley Christian caught a short pass on third down and put on the jets as he outran the entire defense en route to the endzone. Machado considers Jackson to be pretty polished for a sophomore and he finished with 5 catches, 96 yards and 2 touchdowns.

With momentum on their side, Mission Oak decided to keep it going as they went for an onside kick following the touchdown and recovered it. However it didn’t take long for Madera South to get things going in their favor. Their defense forced the stop and the offense got the running game going by scoring the next two touchdowns to go up 14-6 early in the second quarter.

From there, it was the Michael Iriye show. The former receiver turned quarterback responded to the deficit with a 59-yard touchdown run on the quarterback keeper. The conversion failed yet again so they still trailed 14-12.

The Stallion run game had their way early on, but the Hawks shut that down almost immediately and didn’t allow another point for the rest of the game. After trailing 14-12 at halftime, Mission Oak went on to outscore Madera South 24-0 in the second half. Iriye had another big run of 41 yards to give his team the lead at the beginning of the third. He added touchdown passes of 10 and 11 yards to senior Kaream Davis and Jackon, respectively, plus a field goal in the last 4 minutes as the cherry on the top of a dominating performance. He accounted for every single point for his team as he ended with 163 passing yards, 150 rushing yards, 5 total touchdowns, 3 extra points and a field goal.

Following a strong opening performance, Machado deems that this is just the beginning of a dominant season for his offense which still has a lot to clean up.

“We had guys running wide open and we were just missing them,” he said. “We’re not going to miss those every week, so I feel pretty confident that offensively we’ll be pretty good.”

Mission Oak will be on the road for their next two games, including at Lindsay next Friday at 7 p.m., followed by a game at Chavez. They then come home for two games against Mt. Whitney and Exeter before opening league play on Oct. 1 at Porterville, Machado’s former school.