TULARE – After losing legendary head coach Mark Gambini in 2015, the Mission Oak Hawks have waited for another coach to come along and help them get back to their winning ways of the early 2010s. They may have found it in a local native as the Hawks improved to 7-0 after last week’s dominant 28-7 victory over the Tulare Western Mustangs.

Mission Oak’s first full season under Tulare Western grad Michael Machado has resulted in their first 7-0 start since 2013 when Gambini was at the helm. That was also the last season the team defeated Tulare Western which was followed by seven straight losses.

Through their first two East Yosemite League (EYL) games, they’ve already matched the most league wins they’ve had in a season since 2014. That was also the last season they finished atop the EYL in a tie with TU. 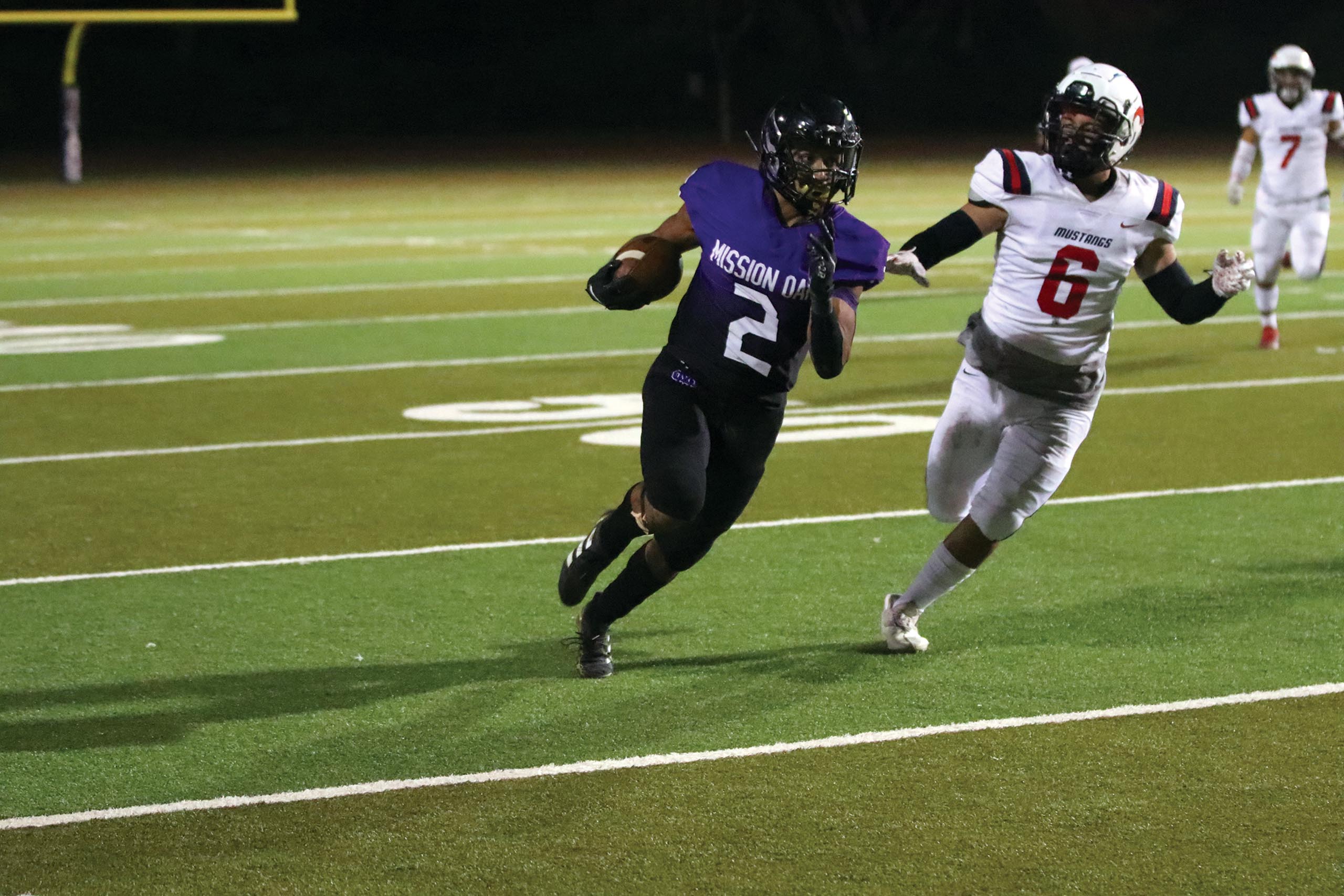 The game against the Mustangs was one of the most important victories they’ve had this season. Tulare Western fell to 5-3, which ties for the best record and includes one of the most competitive schedules of any other team that Mission Oak will face in the regular season. As of last week’s rankings, the Mustangs were seeded towards the bottom of Division II, but have an early win over a Frontier team that is currently ranked towards the top of Division II. They also have wins over Redwood and Dinuba who are currently ranked towards the top of Division III alongside Mission Oak.

According to Machado, this game served as an important litmus test for his squad and they showed their ability to preserve a lead towards the end of a game.

“We really dominated the second half and we hadn’t had that out of our team.

We had the ball for the entire fourth quarter, we moved the chains when we needed to and we punched it in at the end,” Machado said.

The game started out as an early defensive battle as the first quarter was a scoreless battle for field position. The Mission Oak defense were the stars of the game as they held an offense averaging nearly 28 points per game to just seven points on the night. The Hawks offense finally began capitalizing on their defense’s dominance with the longest play of the first half which set up their first points. Senior Rudy Navarro dropped back to pass, scrambled right and reversed field, dodging defenders along the way, before heaving the ball down field to senior Michael Iriye who made a great adjustment along the sideline while the ball was in the air and did even better after the catch. He made it down to the 11-yard line, completing an over 50-yard catch, before finishing the drive with a touchdown run a few plays later.

The score was 6-0 following a blocked extra point, but it was all Mission Oak from that point on as they never let go of the lead. The drive of the game came in the waning moments of the first half after they stuffed the Mustang offense on fourth down at the goal line with just under four minutes remaining in the half. The drive almost stalled before senior Anthony Ledesma put the team on his back. He came up with a clutch contested catch of 50 yards which put them in the red zone with under 30 seconds left. A slew of penalties knocked them out of the red zone, but a defensive penalty gave them one last untimed down from the 20-yard line which resulted in a play that would send any defensive coordinator into a frustrated frenzy.

Navarro threw up a prayer to Ledesma who made a spectacular catch over a defender in the back of the end zone. They then converted the two-point conversions following a fake field goal as Ledesma lined up as the holder, took the snap and ran to the right before diving into the end zone and giving his team the 14-0 lead heading into the break.

That touchdown was arguably the most important of the game as they went into the half with a load of momentum. It also gave them some extra room to operate as the Mustangs got the ball first coming out of the break and found the end zone within the first two minutes.

Thankfully for the Hawks, they had the best player on the field that night as the second half was the Iriye show. Less than two minutes of game time had passed after the Tulare Western touchdown when Iriye caught a short bumble screen and went 40 yards down to the 10-yard line. They turned to him again to finish off the drive for his second rushing touchdown of the night, pushing the lead back up to two touchdowns.

They held onto the lead after possessing the ball for over half of the final period and finished the drive off with an Iriye passing touchdown to Navarro for the final score of the night. After a night where he lined up at quarterback, running back and wide receiver, Iriye is proving to be one of the hardest players to game plan against in the area.

“My role on the team is pretty much an all-around role. Wherever the team needs me they’ll put me and I’ll execute that spot,” Iriye said.

Iriye started the season at quarterback, but the addition of Navarro allowed him to move around the offense. Navarro was a senior transfer from Farmersville and was required to sit out the first five games of the season. Last week’s narrow 35-34 win over Monache was his first start.

Neither Navarro nor Iriye are concerned about the stat sheet or who’s starting at what position. They’re happy as long as the wins keep piling up and that unselfish attitude is a reason Machado deems they’re having such success.

“This team is extremely competitive. I think we have a lot of the right guys in the right positions, and we feel pretty confident in each position group,” Machado said. “They’re willing to allow coaches and myself to move them wherever we need to move them in order to have an opportunity to win. So I think that’s why this team is having the season that they’re having, because they’re willing to do whatever we ask them to do to have a chance to win.”

They’ll have another big test next Friday at 7:30 p.m. against the Tulare Union Tribe in a game that will likely determine the eventual EYL winner. The Tribe have finished as a top two team in the EYL in six straight seasons, including four league championships.