Mustang volleyball’s 23 wins are most in last 17 years

TULARE – A winning program isn’t built overnight. A team must endure a few bad to mediocre seasons to establish successful routines built around a winning mindset and culture. For the Tulare Western Mustangs, the compound effect of their successful habits has kicked in during their seventh season under head coach Laura Brinkman, as their 23-8 regular season record is the most wins they’ve had in nearly two decades.

Last Wednesday’s sweep over Tulare Union resulted in only the second win for Tulare Western in the Ball Game in the last 11 years. It was also their first time winning more than 20 games in a season since 2004.

Their 22nd win came in dramatic fashion last week as they handed the Monache Marauders their first East Yosemite League (EYL) loss in four years. Brinkman believes that the win couldn’t have happened at a more perfect time, just a week before playoffs. 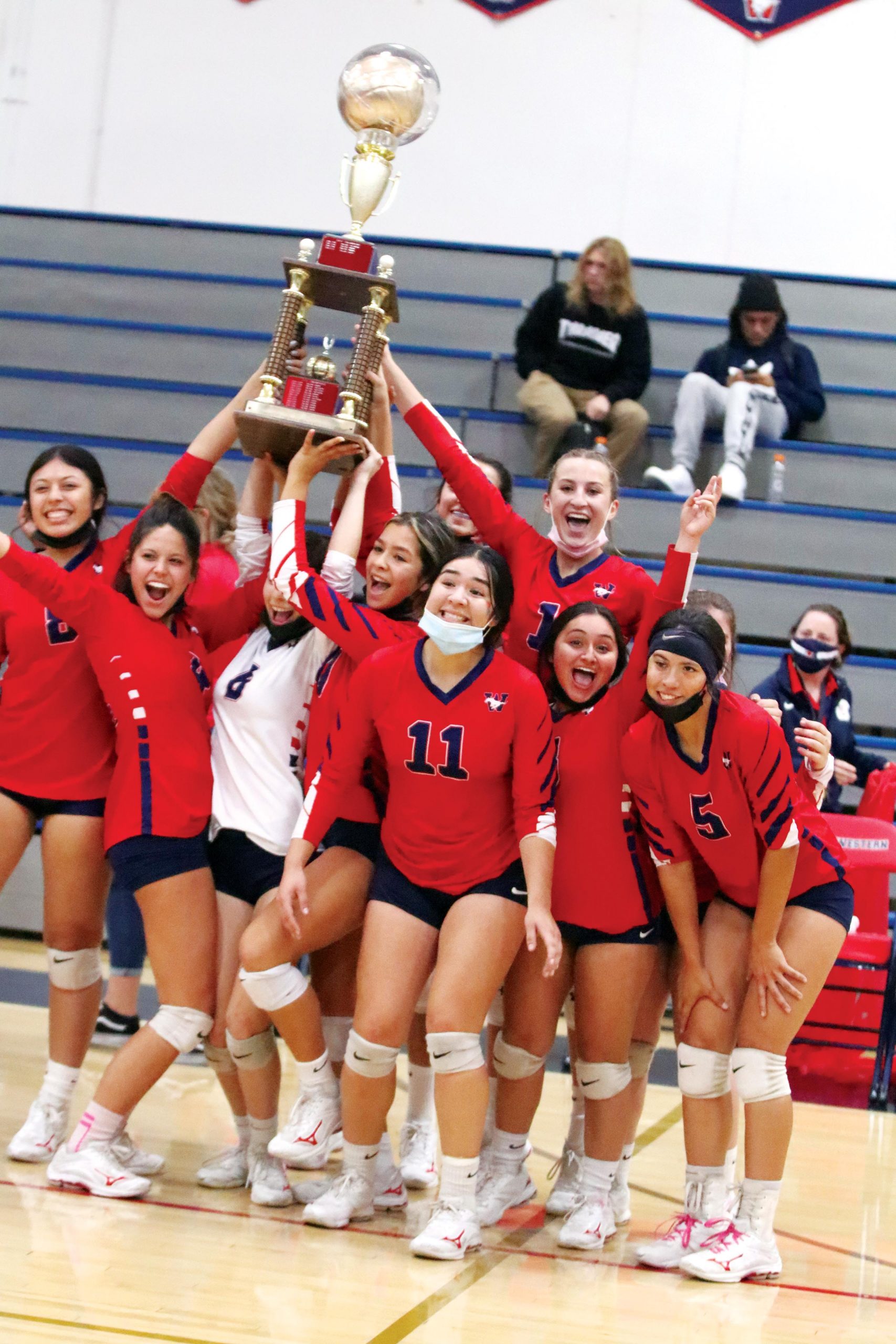 Tulare Western players hoist the Ball Game trophy for only the second time in the last 11 years. Photo by Jermaine Johnson II

“I think it was just a boost, they knew they could do it,” Brinkman said. “It’s definitely the one to get over the hump. You know you can do it the whole time and [now] just finally doing it. It was just a big confidence boost.”

Although the Mustangs still finished second in league behind the Marauders, it was their best EYL finish under Brinkman. Over the last seven seasons, she’s seen the evolution from a program struggling to stay above .500 to now competing for league titles. She credits the team’s commitment in the summer as a key contributor to the growth over the last few seasons.

“These girls come in every single year and put hours in during the summer and get so much better between June and July that they’re ready to come out in August. That’s kind of where the season is always made,” she said.

She also credits the team chemistry as a main reason they’ve seen so much success this year, which was also the first reason given by senior Jeslyn Cuellar when asked about the team’s growth. Because of how close they are, Cuellar believes that they can give each other some tough love and criticism whenever it is needed.

“We have a lot of chemistry. We all hang out outside of volleyball, we’re really a good group of girls,” she said. “We’ve always had great chemistry throughout the years, there’s never been any drama so it’s been really cool to see how close the girls are, it’s really like a sisterhood.”

Cuellar can speak to the program’s growth better than any other player as she was the only freshman to play on varsity over the last four years. She made an immediate impact as she finished just outside the top 20 in the Valley in assists. According to her coach, she’s developed into a quiet leader on the team.

“She’s the one that at the end of the timeout she’s talking to the girls and making sure that she’s [doing so] on the court and being the leader and the person that they all look to and rely on,” Brinkman said.

Outside of Cuellar, the team has six other seniors that will leave large shoes to fill next year including libero Ally Beck. Beck and Cuellar are two best friends that have been playing volleyball together since 3rd grade. The chemistry shows on the court as the duo leads the team in both digs and serving aces. Cuellar also leads the team in kills and is second in blocks and assists.

The Division III Valley playoffs will run through Tulare as the Mustangs are ranked as the top seed. Last night they hosted No. 16 Atascadero which occurred after press time. If they got the win, they’ll host the winner of No. 8 Paso Robles and No. 9 Lemoore.