Highland Scots dominate over Exeter in 49-32 win on the Monarchs’ court, Exeter evens record at 4-4 after tournament play

EXETER – Despite some hard play on their home court the Monarchs gave away a pre-league game to the Highland Scots last Tuesday. It was a difficult 49-32 loss to swallow, especially in the inaugural matchup between the two teams.

“They just play a tough style of basketball and I respect it,” Highland head coach Scott Smith said. “Because I’ve seen them and what they’ve done in the past and follow them in the past which is why we scheduled this game.”

There were immediate scores by both teams and they were evenly matched early on at 2-2, 5-5 and 9-8 within the first quarter. Exeter eventually came in with three three-pointers and led heading into the second quarter 11-9.

Jake Rowlett put the team on his back and scored all of Exeter’s points in the second quarter. Unfortunately, that only amounted to five points. On the other end of the court, Highland dominated and put an additional 15 points on the board, and ended the first half with a 22-16 lead.

Not to make excuses for his team, but certainly worth pointing out, Monarch head coach Eli Garver said that Saturday, Nov. 29, was the time he was able to get in a full team practice as some football players had moved from one sport to the next. That was all made worse by the impact of COVID, which set some players back a full year. The last real game experience for some players was in eighth grade. 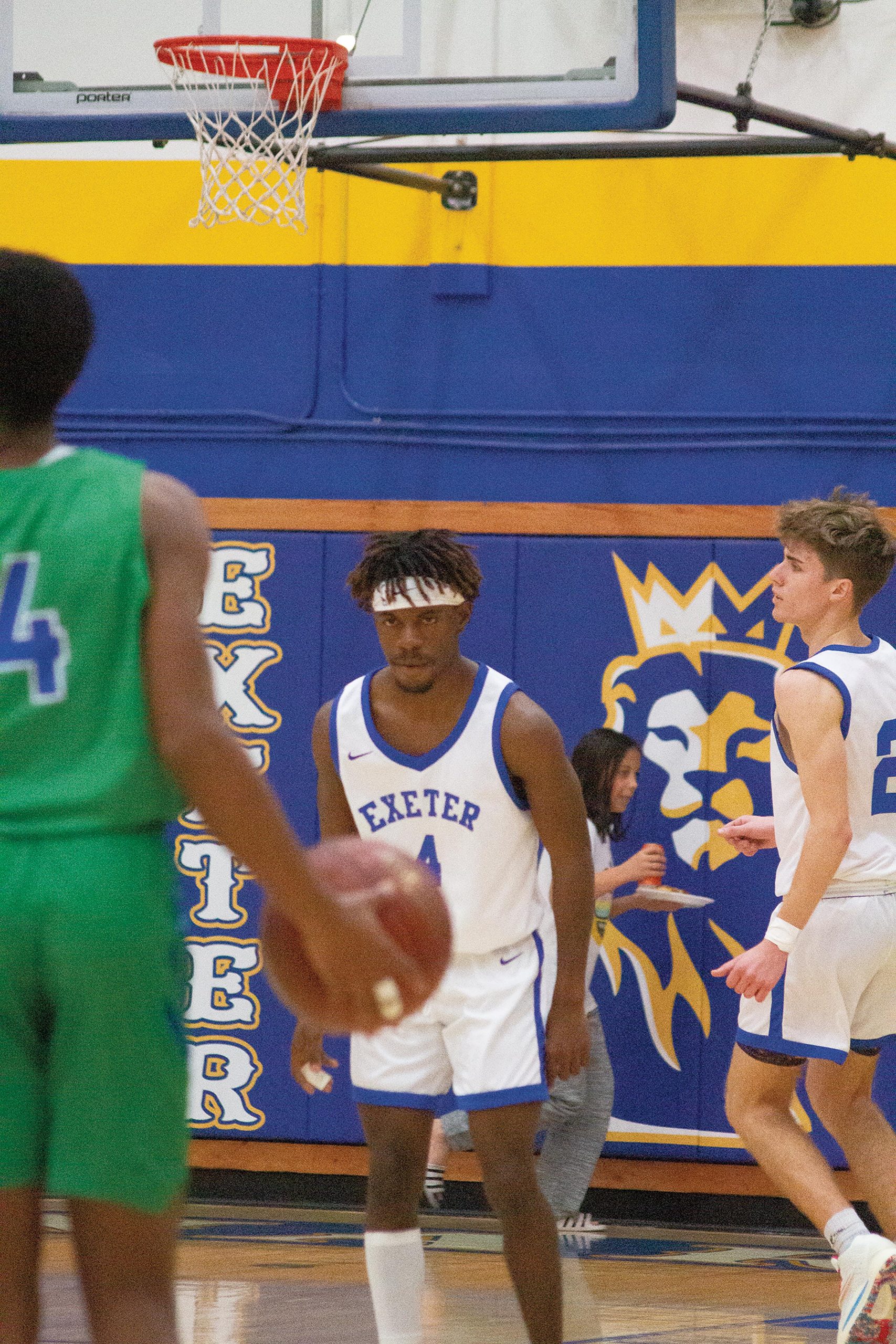 Above: Dewayne Coleman stares down a Highland Scot while defending the paint in Exeter's home game last Tuesday, Nov. 30. Below: Jake Rowlett hogs a loose ball to keep it away from Highland who defeated the Monarchs 49-32.Photo by Brianda Lemus-Ceballos

“Guys having to move from eighth grade all the way up to varsity or from freshman to varsity, because we didn’t have a season [that’s tough],” said Coach Garver. “We’re having to adapt and everything like that, but we’re getting better day by day.”

Entering the second half Highland ended the third quarter with a 5-point lead and extended it to 10 with a 36-26 lead heading into the final quarter. Consistently down but not out in the fourth quarter, the Monarchs finished strong with senior Noah Peltzer scoring four points but ultimately ending the game in a 49-32 loss.

Exeter attended a tournament over the weekend where they took three wins against Kings Christian, Orange Cove and Granite Hills bringing their record to .500 at 4-4. Exeter was quick to get back to their home court as they hosted the Corcoran Panthers (2-2) on Monday, Dec. 6, after press time.