Lindsay gets trampled by the Tulare Western Mustangs in shutout loss at home on Aug. 16

LINDSAY –  In their second game of the season, Lindsay lost to Tulare Western in a 3-0 sweep.

Lindsay’s non-league loss on Aug. 16 to Tulare Western was to be expected after their 3-21 record last year, but wasn’t without vigor from the home team. The younger Cardinals fought hard against the older, more experienced Mustangs, but still fell victim to Tulare Western’s more refined passing and hitting strategy in all three sets.

The Cardinals made a few excellent plays, running nearly into the stands for a ball in the first set and putting up an unforgettable block in the second set.

After a consecutive contact (double hit) fault early in the first set, things started to go downhill for the Cardinals. The Mustangs dominated the volleys with methodical ball control. Lindsay hustled hard to keep up with kill after kill. They managed to score their eighth point of the set despite the ball flying out of the bounds towards the crowd, shocking the whole gym when the ball made it back over the net. Still, Tulare Western won the set 25-9. 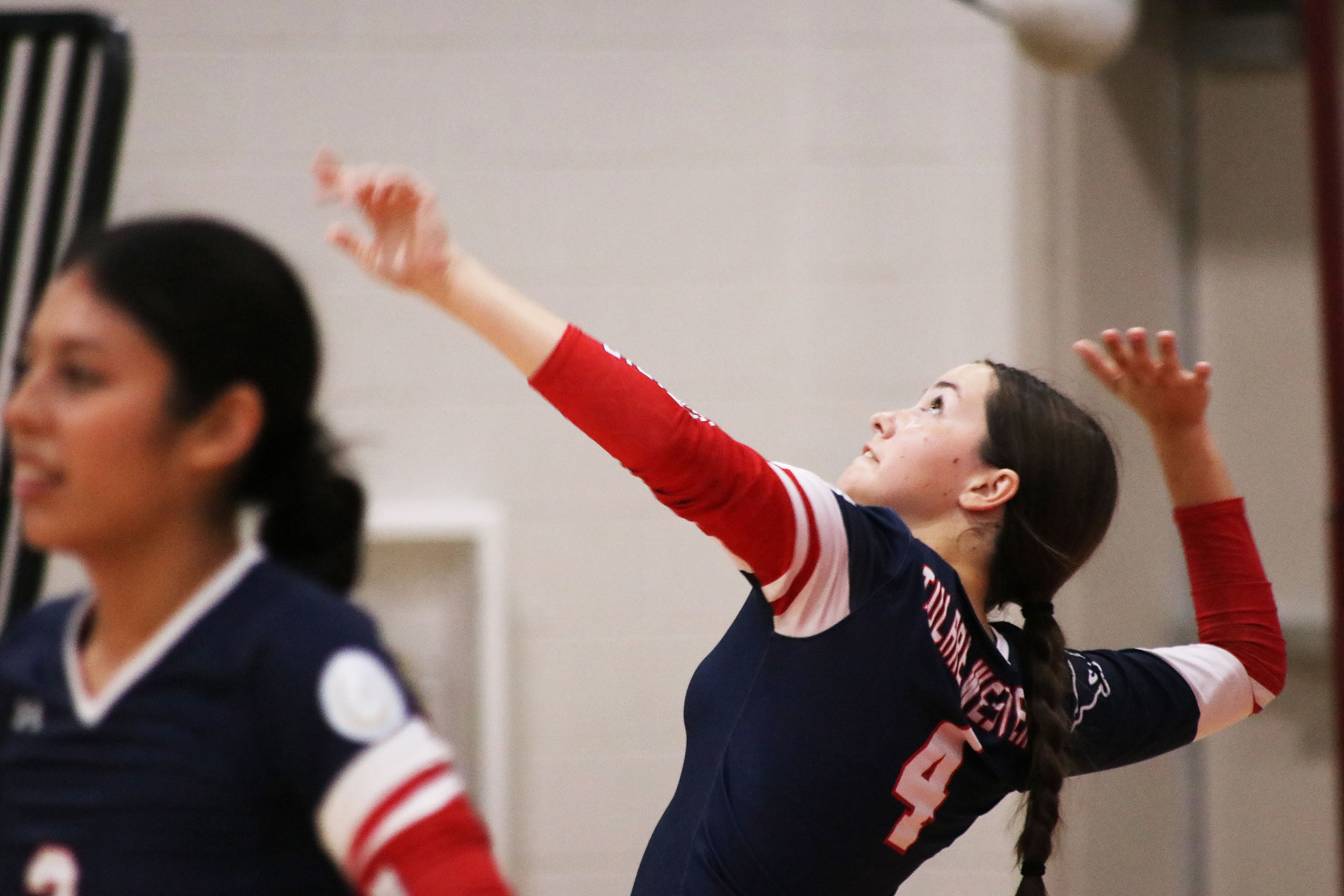 Faith Powell rears back to serve a ball against the Lindsay Cardinals in Lindsay on Aug. 16. Tulare Western went on to win in a 3-0 sweep. Photo by Paul Myers

The Cardinals put up a good fight in the second set. The Cardinals are a young team that depend more on hustle to keep up with more experienced teams. Though the Mustangs powered through the first set with unwavering persistence, they faltered, giving Lindsay the chance for two points in a row that seemed to revive the Cardinals spirit. The Mustangs had to fight hard for their 18th point, which nearly went to Lindsay after a long volley, but went to Tulare Western with a textbook kill by Morgan Mattos. Tulare Western won their second set with a score of 25-16.

Tulare Western’s hitters made consistent kills every set, but their consistency depended on their setters Angelica Rios and Faith Powell. Rios put up several impeccable sets to the opposite and middle hitters and even many behind her to the right outside hitter. In the third set, that consistency led to a quick domination by Tulare Western. The Mustangs won the set 25-10.

This was Lindsay’s second pre-season game after playing Mission Oak yesterday. Head coach, Angel Leon, said despite losing to these two teams, the team is looking good this season and playing better teams only helps them gain experience. After a losing record last season, Leon is hoping to improve this season and develop young players for future seasons. Lindsay will play Fowler High School next on Aug. 18.

It was the opener Tulare Western was looking for and head coach Kaylee Taylor was happy with the chemistry she saw on her team.

“For the first time they’ve come together to play a full game. They played great,” Taylor said. “I’m looking for a lot of big plays this season.”

After the canceled 2020-21 season, Tulare Western came back last year to dominate with a 27-10 overall record. The Mustangs are an experienced team now made up of juniors and seniors who have already played a season together. They have their passing strategy down to a science and it paid off for their first win. Tulare Western will play next at Strathmore on Aug. 18.