VISALIA – The Tulare Western Mustangs dominated the El Diamante Miners in both possession and points in their first test of the season on Aug. 18.

In Tulare County’s first football game of the 2022 season, the Mustangs bested the Minors 31-13.

Before the 31-13 Thursday night drubbing, the Mustangs last met the Miners in 2019, when they won 40-14. This time, the Mustangs were led by senior quarterback Carmine Ficher who played a pivotal role in the team’s five touchdowns.

Tulare Western drew first blood after a nine minute drive when Ficher passed short to his wide receiver running a slant route. But the Miners immediately answered with one of their own, a 68 yard pass up the sideline that was run into the endzone on their first offensive play.

“I was very happy with the way we responded [to El Diamante’s touchdown] and took care of business even in the face of adversity,” Tulare Western head coach Derek Rosa said. 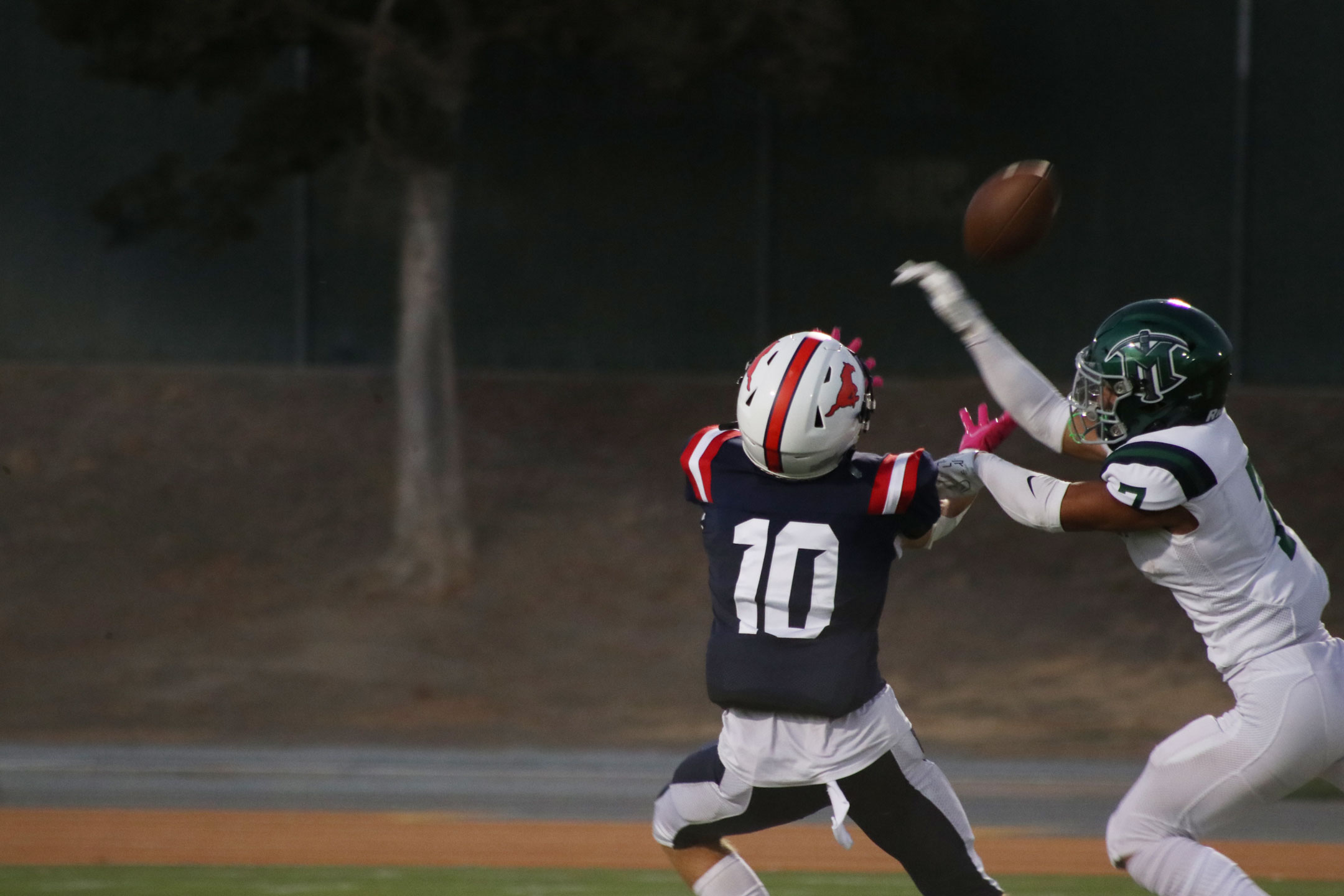 Jacob Bell contends with an El Diamante defender while trying to haul in a long pass in the second quarter. Photo by Paul Myers

Tulare Western quickly answered with another touchdown, run in from first and goal at the seven by Ficher. The Mustangs attempted a two-point conversion, but failed.

The El Diamante defense consistently stopped the Mustangs from running the ball on first and second down, but the Miners’ key weakness was obviously with their third down defense. Even worse the Miners’ offense had trouble holding onto the ball.

The Mustangs charged quickly to take advantage when Ficher completed a 24-yard pass to Carson Lopes for Tulare Western’s third touchdown of the first quarter. Still the Mustangs’ two-point attempt failed for the second straight time.

“It’s a whole new system for the kids from last year,” El Diamante’s new head coach Devin Ramos said. “Changing coaching staff can change the style obviously, so we got some kinks to work out.”

The Mustangs slowed down in the second quarter, but retained command of the ball. Whenever the Miners took possession, the Mustangs made fast work of stopping their drive. The Mustangs scored on another pass from Ficher to Lopes then failed the two-point conversion with three minutes to go in the half.

After halftime, the game slowed, with the teams trading turnovers. A single touchdown in the third quarter put the Mustangs up 31-7. The Miners were able to answer with a touchdown that was run in from the 1-yard line in the fourth quarter.

“At some point we’re going to have to establish the run game going forward, so we can be a more balanced offense,” Rosa said. “Defensively I thought we played well.”

On Aug 26, Tulare Western will face a tough opponent in the Bullard Knights, for a true test of their abilities. The game against Bullard will show just how well the Mustangs stack up against a division one team. El Diamante will look to redeem themselves against Tulare Union on Aug. 26.