PORTERVILLE – The Strathmore Spartans took down the Exeter Monarchs in their first game of the season on Aug. 19. After a scoreless first quarter, both teams kicked their running game into gear leaving the Spartans as the conqueror.

Despite wracking up penalties, the Spartans managed three touchdowns to put them ahead of the Monarchs’ two scores for a final score of 18-12. The Monarchs lost their senior running back Matthew Howell to a shoulder injury early in the game, which put them at a disadvantage in a game where the run game reigned supreme.

After a scoreless first quarter, the Monarchs finally managed a touchdown five minutes into the second. Five minutes after Exeter’s first touchdown, Strathmore answered with one of their own, tying the score before the half.

At first, both teams had attempted a few passing plays, but eventually, the game dissolved into a tumultuous battle of running backs against defensive lines. Both teams marched the ball slowly up and down the field on every possession, gaining only a few yards on most plays. 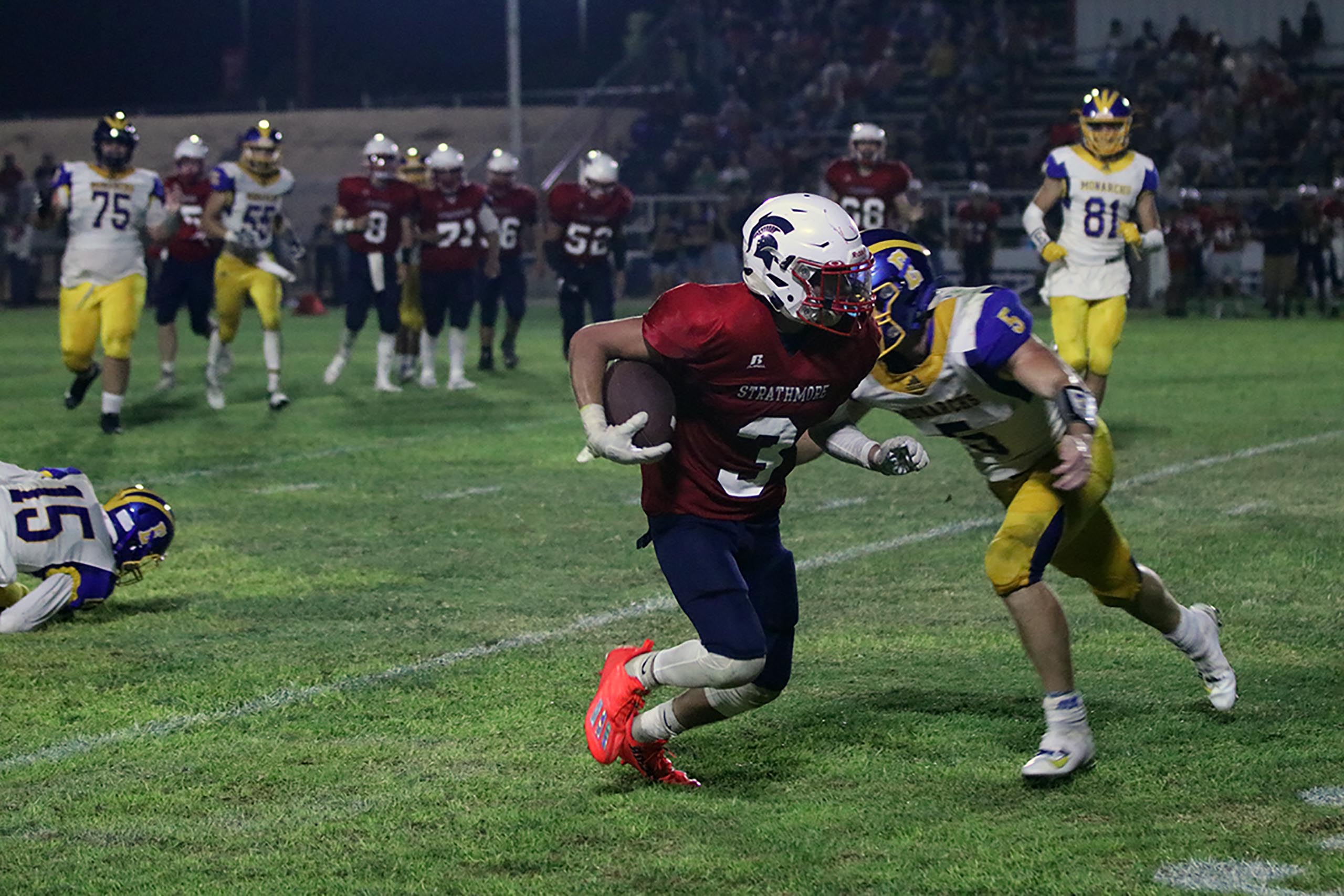 Strathmore running back Jacob Poole leaves would-be tacklers from Exeter in his wake on his way to a touchdown against the Monarchs on Aug. 19. Photo by Claire Livingston

Exeter experienced several issues with cramps in the third and fourth quarter, and Blackwell attributed his team’s lack of cramping issues to their conditioning. With 22 years experience coaching a team built on speed, Blackwell spends a lot of time focused on conditioning.

Although they struggled a few times to get through the red zone in the third quarter, Strathmore scored another touchdown in the last few minutes to cement their lead over Exeter. The Spartans commanded possession of the ball in the second half, leaving Exeter with limited chances to catch up. Strathmore’s final touchdown came in the last five minutes of the game.

On the kickoff return, Zack Williams returned the ball deep into Strathmore territory, giving Exeter the chance for one final touchdown with three minutes left, but it wasn’t enough. With the ball in Spartan hands, the Monarchs’ hopes of catching up dwindled with the final seconds of the game.

Despite the win, Blackwell was still critical of his team’s performance, but is hopeful for the remainder of the season.

“I think we played like a JV football team,” he said. “They have to have big feet to fill the shoes of the people that played last year.”

Spartan fans can see if their team fills those shoes at home again on Aug. 26 against Hanford West. The Monarchs will return home to play Woodlake next week on Aug. 26.