In their first test away from home, the Mt. Whitney Pioneers trounce the Woodlake Tigers in a 3-0 win

WOODLAKE – The Mt. Whitney Pioneers swept the Woodlake Tigers in their first game away from home. The Pioneers dominated the Tigers in both aces and kills and quickly pulled ahead in every set.

Despite it being the Pioneers’ first away game of the season, they began each set strong, pulling ahead and overpowering the Tigers quickly.  The Tigers fell behind, lost steam and allowed the Pioneers to win by at least eight points each set. It helped that the Pioneers had lots of support in the stands.

“It was great because a lot of our girls play club together and that really brings out the family on our team,” Mt. Whitney head coach Victoria Johnson said. “We had girls come down from Three Rivers today just to watch these girls play.”

The Pioneers came out hard and strong in the first set, when the Tigers jumped up to block a kill, the Pioneers were able to quickly switch their strategy and tip the ball over their opponents outstretched hands. Woodlake struggled a bit with finding their setter and placing the ball for their hitters. Mt. Whitney won the first set 25-14. 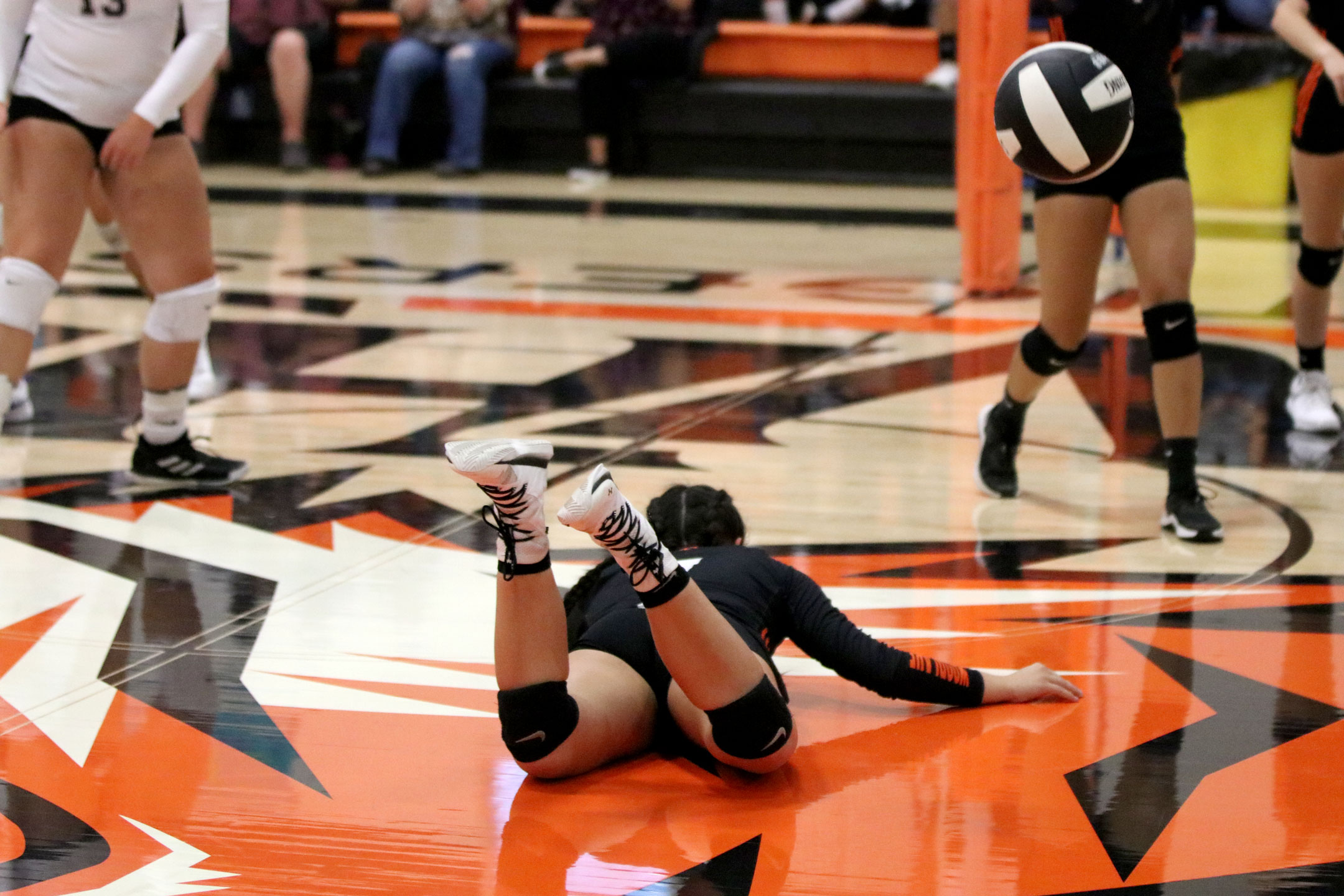 A Woodlake player dove and missed an attempt to dig out a ball from the Mt. Whitney Pioneers who went on to defeat the Tigers 3-0. Photo by Claire Livingston

The Tigers were able to briefly catch up to the Pioneers opening lead, but struggled with getting the ball over the net and in bounds. Despite Johnson receiving a yellow card from the official, which disrupted play for a few minutes, the Pioneers won 25-17.

“After the game I went over to ask [about the yellow card] because if it’s representing me and I got a yellow card and it’s unsportsmanlike, I wanted to make sure everything was cleared up,” Johnson said, “but it was just a misunderstanding.”

Yellow cards are the official second stage of a minor misconduct warning and are so rare in volleyball that it can seem more dramatic than it is. All that will happen is play will be paused for the scorer to record the occasion on the score-sheet and the offender will be under scrutiny for future outbursts.

After the game, the official repeated that the yellow card was “a misunderstanding.”

The Pioneers seemed motivated to finish the sweep up quickly at the start of the third set. At the same time the Tigers seemed to have lost some of their hustle and were unable to get under the Pioneers’ powerful serves and kills. The Tigers also struggled to make any kills themselves, allowing the Pioneers to control the ball and pull ahead quickly. Mt. Whitney won the final set 25-16.

“Today we came out flat,” Woodlake head coach Florencio Guerra said. “It doesn’t help that we gave a lot of free balls and we’re not aggressive.” 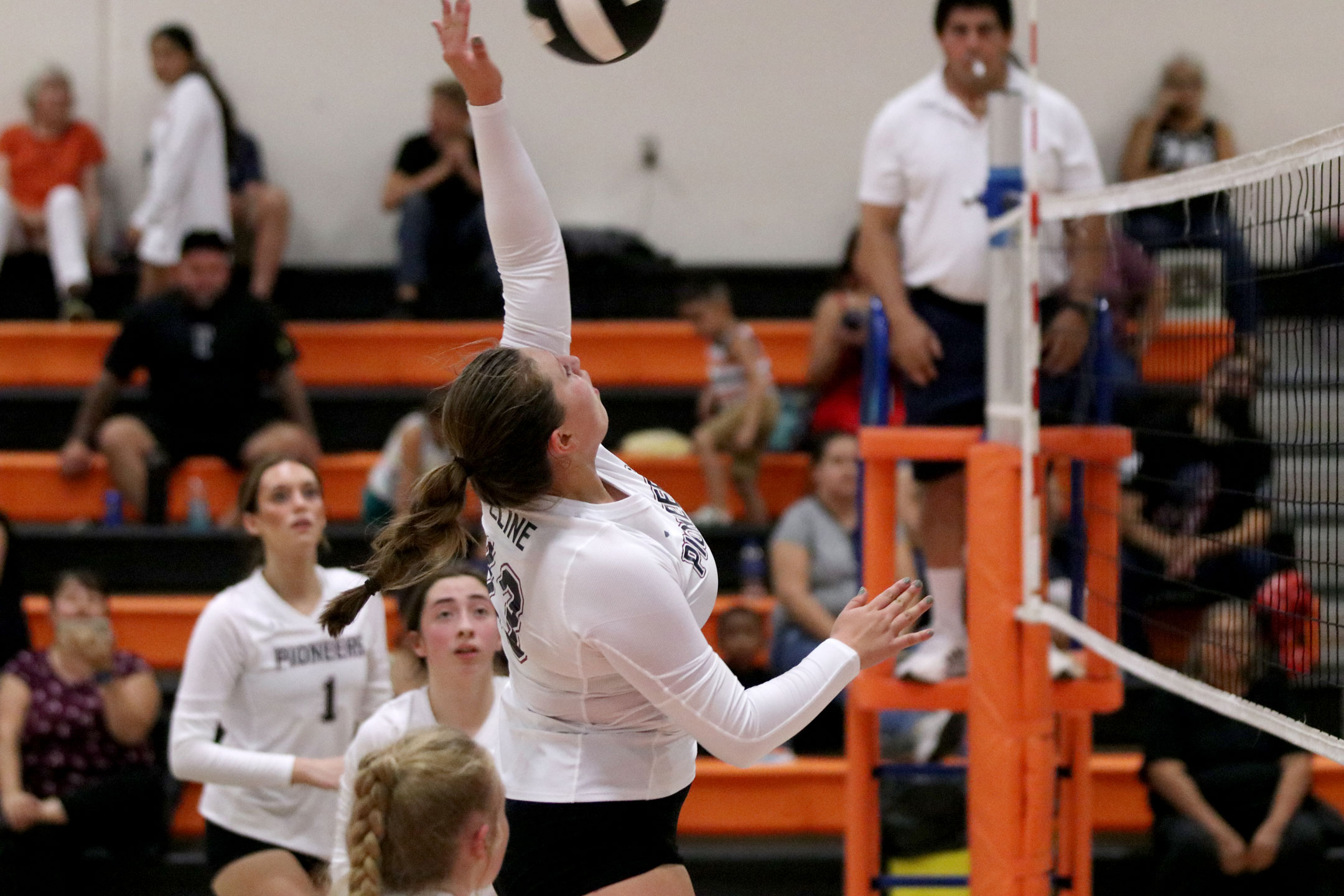 Mt. Whitney Pioneer Avery Cline hits the ball over the net against the Woodlake Tigers on Thursday, Aug. 25 on the road at Woodlake. Photo by Claire Livingston

Guerra hopes the team will work hard and make it to the playoffs this season after being knocked out of the first round by Caruthers High School. Their next game will be on Aug. 26 when they will play in a tournament against Madera South.

Mt. Whitney isn’t looking ahead to the playoffs just yet. According to Johnson, they’re taking it one game at a time.

“We’re really trusting the process and not worrying about the final project,” Johnson said, “and so we’re seeing lots of improvements each and every game.”

The Pioneers will return home to play Kingsburg on Aug. 30.