EXETER – The Exeter Monarchs defeated the Woodlake Tigers for the second year in a row. Woodlake missed their kick for an extra point in a fourth-quarter touchdown, leaving the score 7-6 in Exeter’s favor.

The Exeter Monarchs took home the Valencia Cup in their first home game against the Woodlake Tigers. In a highly defensive game, Exeter scored one touchdown in the second quarter. It looked as if Woodlake would send the game into overtime with a touchdown in the fourth quarter, but they missed the extra point, giving Exeter the win 7-6.

“A W is a good feeling,” Exeter head coach Keirsten Lamb said. “This game is always a battle, it was an emotional back and forth and the kids kept their composure and did what we asked them to do.” 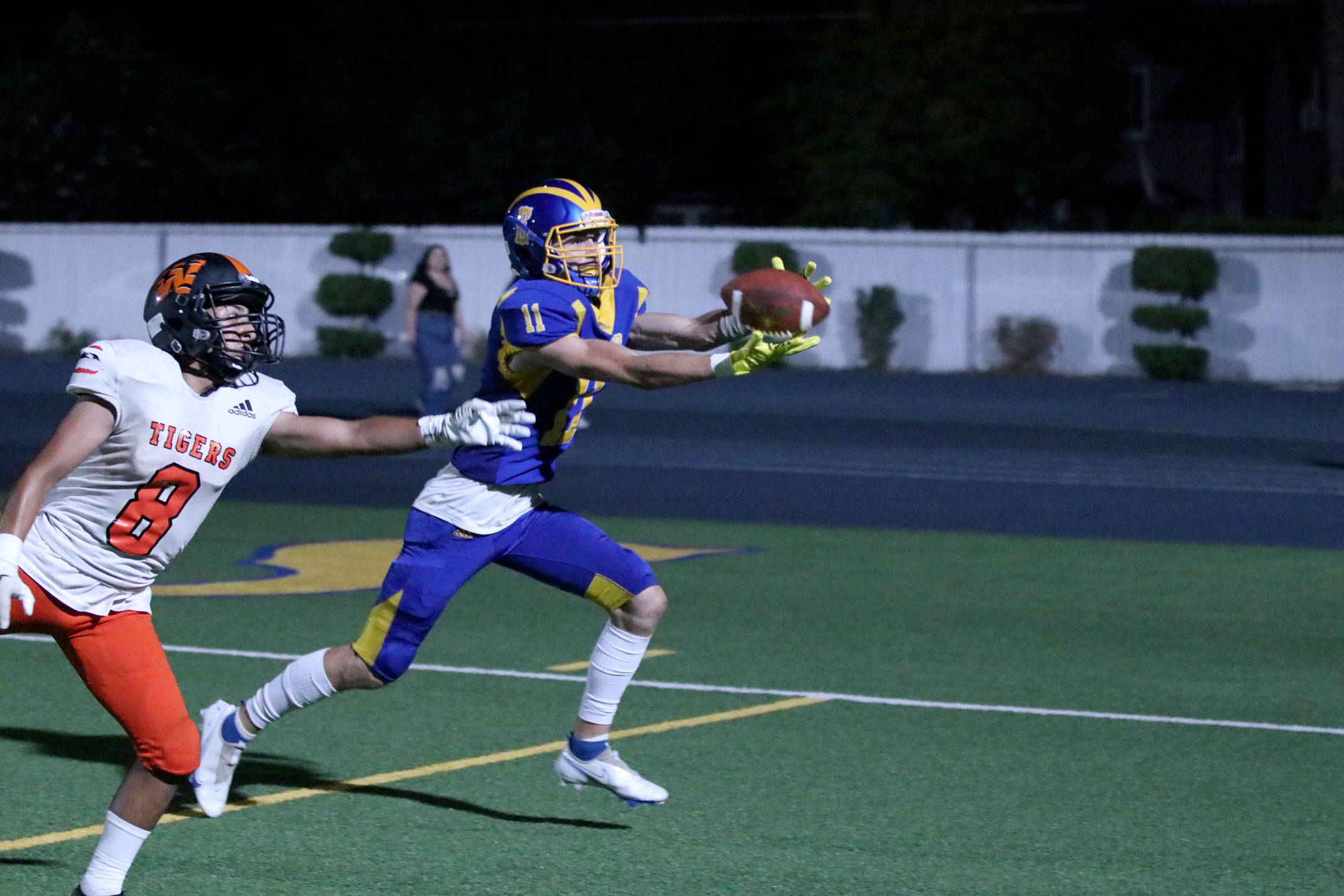 Woodlake reaches for Exeter's wide receiver Andrew Taylor in the game for the Valencia Cup. Photo by Claire Livingston

The first quarter was all defense from both teams. The Monarchs and the Tigers traded stops back and forth, leaving the score 0-0 at the end of the quarter.  It looked as if the second quarter would go the same way, until Exeter’s running back Matthew Howell made two excellent 20-yard runs to move the ball into Woodlake’s territory.

Howell injured his shoulder in last week’s game against Strathmore and the team suffered in that game without him. With him back on the field, Exeter was able to score the first and only touchdown of the half. A pass from quarterback Ruben Ruiz to wide receiver Andrew Taylor in the endzone with a minute left in the half put Exeter up 6-0. The point after touchdown kick was good, and proved to be key in securing Exeter the win.

“[Howell} is just a warrior,” Lamb said on the running back’s return to the field this week. “He’s one of the hardest working kids we have on the team. They all work hard, but he’s an exceptional kid.” 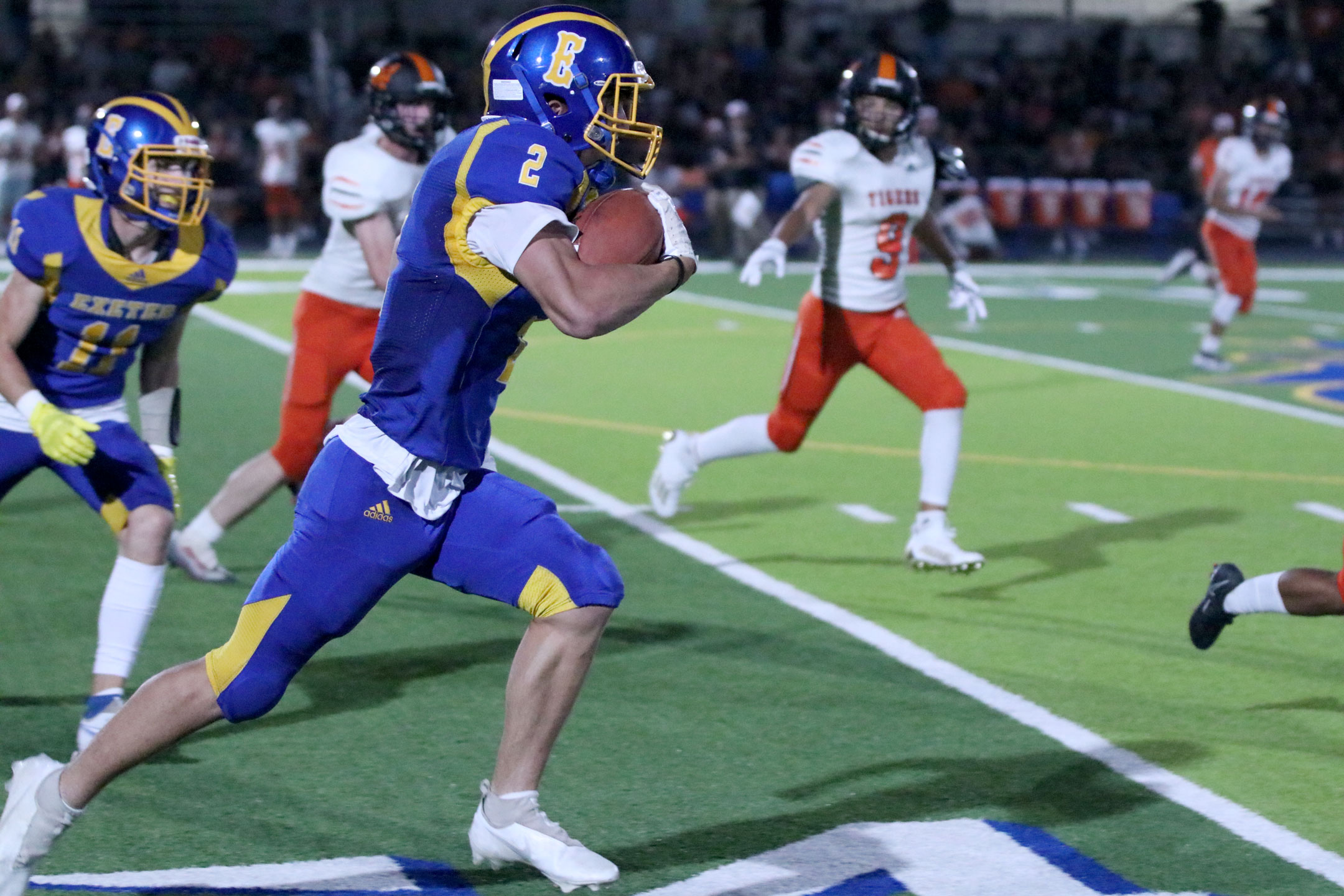 According to Lamb, the touchdown play was supposed to go to the opposite side, but Ruiz felt pressure and rolled the other way. Taylor stayed in his route and was able to make the catch for a great play.

The third quarter was much like the first. The defense traded stops back and forth until Woodlake intercepted the ball just before the end of the quarter. In the fourth, they were stopped, but the snap was bad on the punt and Exeter recovered the ball on Woodlake’s 48-yard line. It looked as if Exeter would score again, but it was turned over to Woodlake in the red zone.

After a few short plays to get the ball into Exeter territory, Woodlake’s Dominik Rodriquez had a big run down the sideline into the redzone. Woodlake pushed forward and scored from first and goal on the 1-yard line.

A false start penalty set the ball fifteen yards back when Woodlake went for the point after touchdown and they missed the key kick, which cost them the game. Woodlake went into overtime with Hanford West and won last week, so this is the second close game they’ve had in a row. 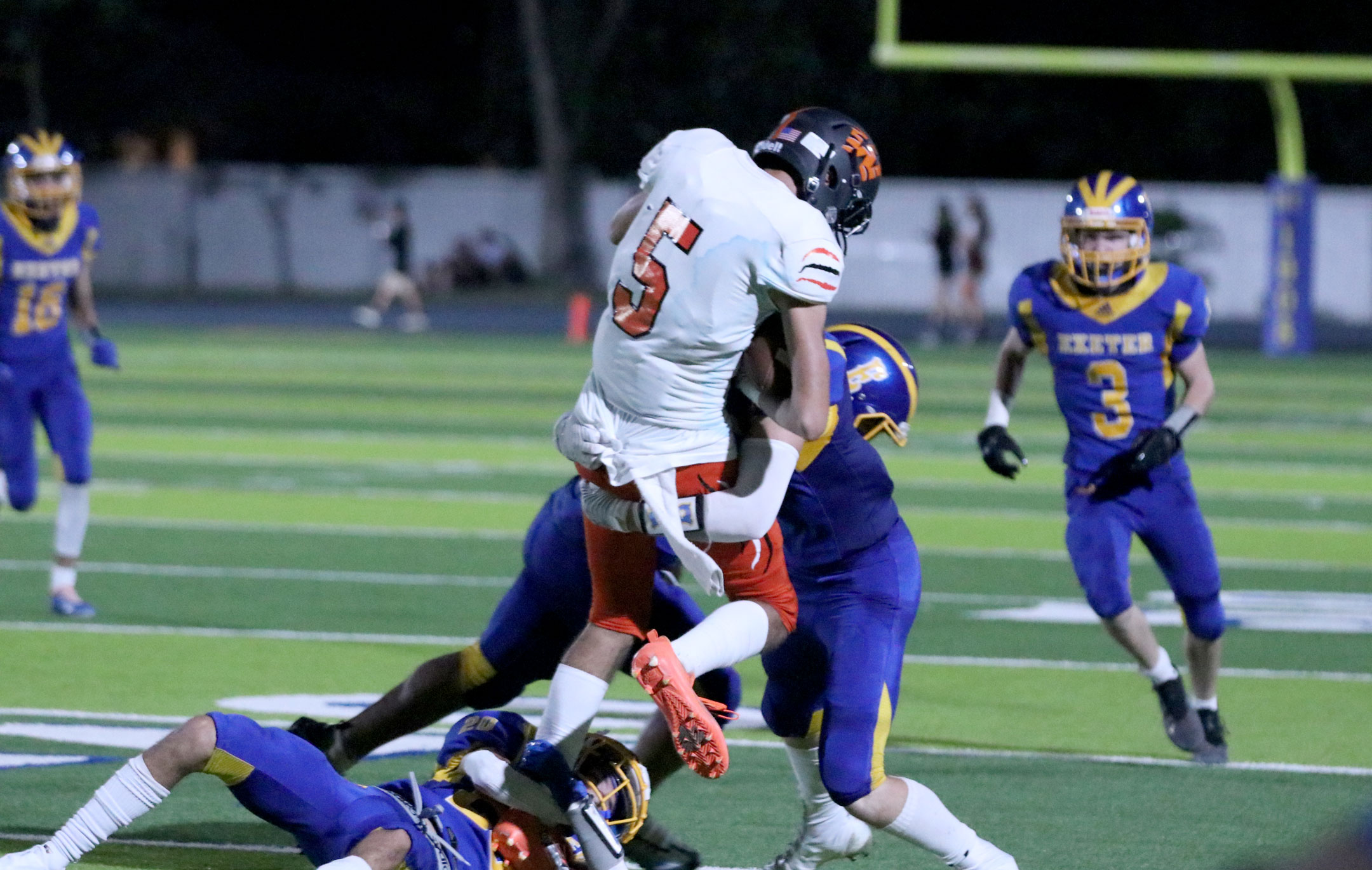 Woodlake will play at Sierra Pacific on Sept. 3.

“I can’t wait to see how much we’re gonna grow through this emotional thing that we went through tonight,” Lamb said. Exeter will face Lindsay at home on Sept. 2.

The Woodlake and Exeter rivalry is the oldest rivalry in the Central Section. In 108 years it has only been canceled twice: once in 1941 due to World War II and once in 2020 due to the Covid-19 pandemic.