VOLLEYBALL: Sierra Pacific takes the reins in 3-1 win over Mustangs

TULARE – The Sierra Pacific Golden Bears saddled the Tulare Western Mustangs with a decisive 3-1 defeat while on the road in Tulare. Although it wasn’t clear who was in firm control after the first set.

“I think that we have a lot to work on,” Sierra Pacific head coach Cassidy Avila said. “But that was a good competition for us.”

Tulare Western started strong in the first set. Though Sierra Pacific took the lead first, the Mustangs kept up, and pulled ahead towards the end. The Golden Bears called a timeout when the Mustangs were up 20-17, but it didn’t do much outside of pausing the game. The Mustangs only allowed one more point and secured their first and only win 25-18. 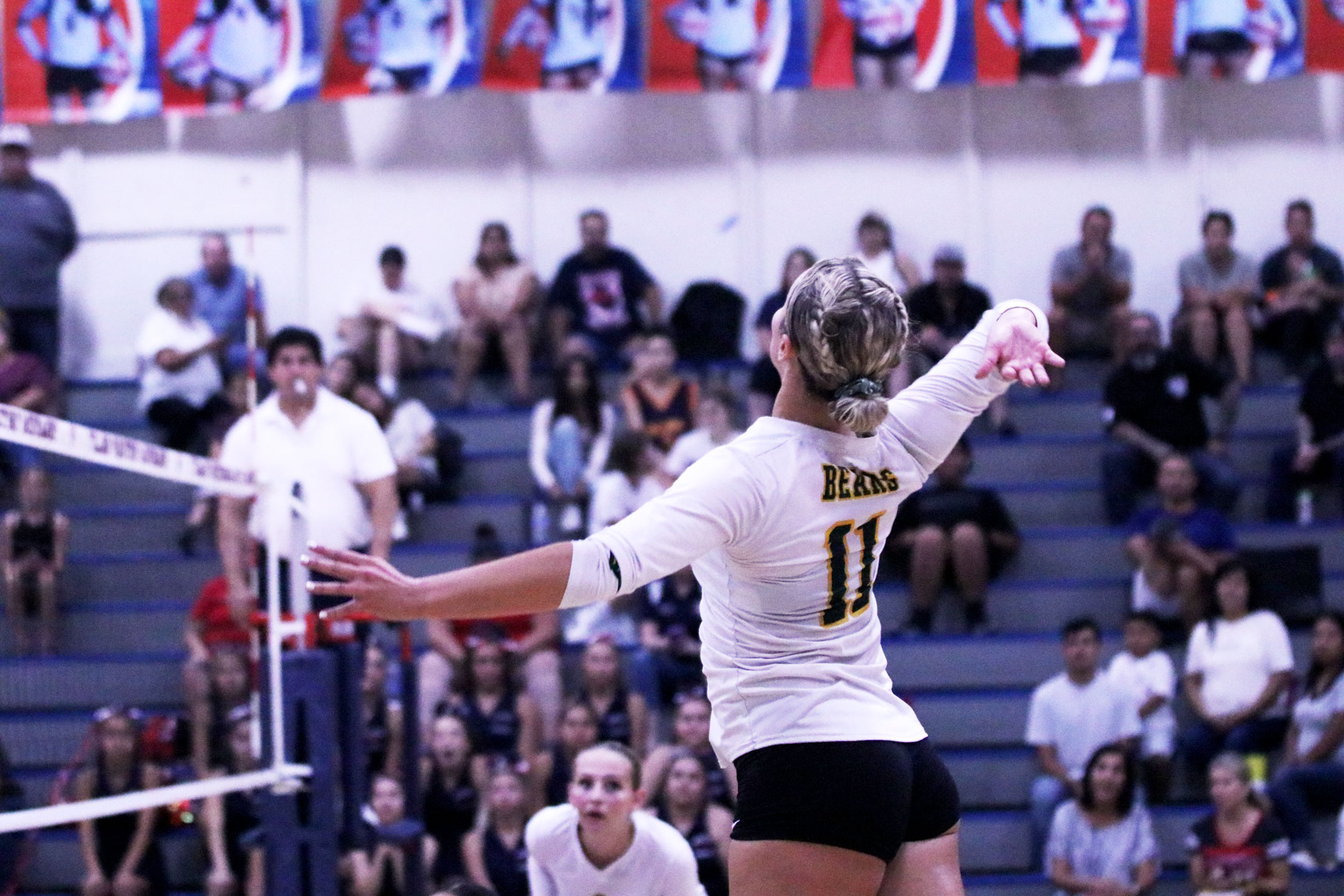 Sierra Pacific senior Ashlan VanGronigen prepares to hit the ball at Tulare Western during the Golden Bears' 3-1 win over the Tulare Western Mustangs on Aug. 29. Photo by Claire Livingston

Sierra Pacific grabbed the reins early in the second set and didn”t let go for the rest of the game. Mostly due to the superb hitting by senior Ashlan VanGronigen. Whenever VanGronigen was on the court in the opposite hitter position, Tulare Western struggled to get under her kills. When the Golden Bears had 24 points, they seemed to get stuck, unable to get that final point. They allowed the Mustangs six points in that time. The final score was 25-14.

“I think they just took a bit longer to get going on that set,” Tulare Western head coach Kaylee Taylor said. “They’re influenced by intensity, so whenever the other team gets a couple points, they lose that intensity.”

Tulare Western attempted a comeback in the third set, keeping neck and neck with Sierra Pacific for points. The Mustangs were up 23-22 during a timeout, but they couldn”t get over the hump as the Golden Bears took the third set 25-23.

The Mustangs made several errors in the fourth set including consecutive contacts and net fouls. The Mustangs still had trouble facing off against VanGronigen. She dominated both from the back row and especially in the front row. Both teams stayed mostly even throughout the set, trading the lead back and forth. But those errors were the end of the Mustangs. Sierra Pacific won the fourth set 25-21.

“There were a lot of mistakes on our part,” Taylor admitted about the errors, “it’s tough to lose like that.” 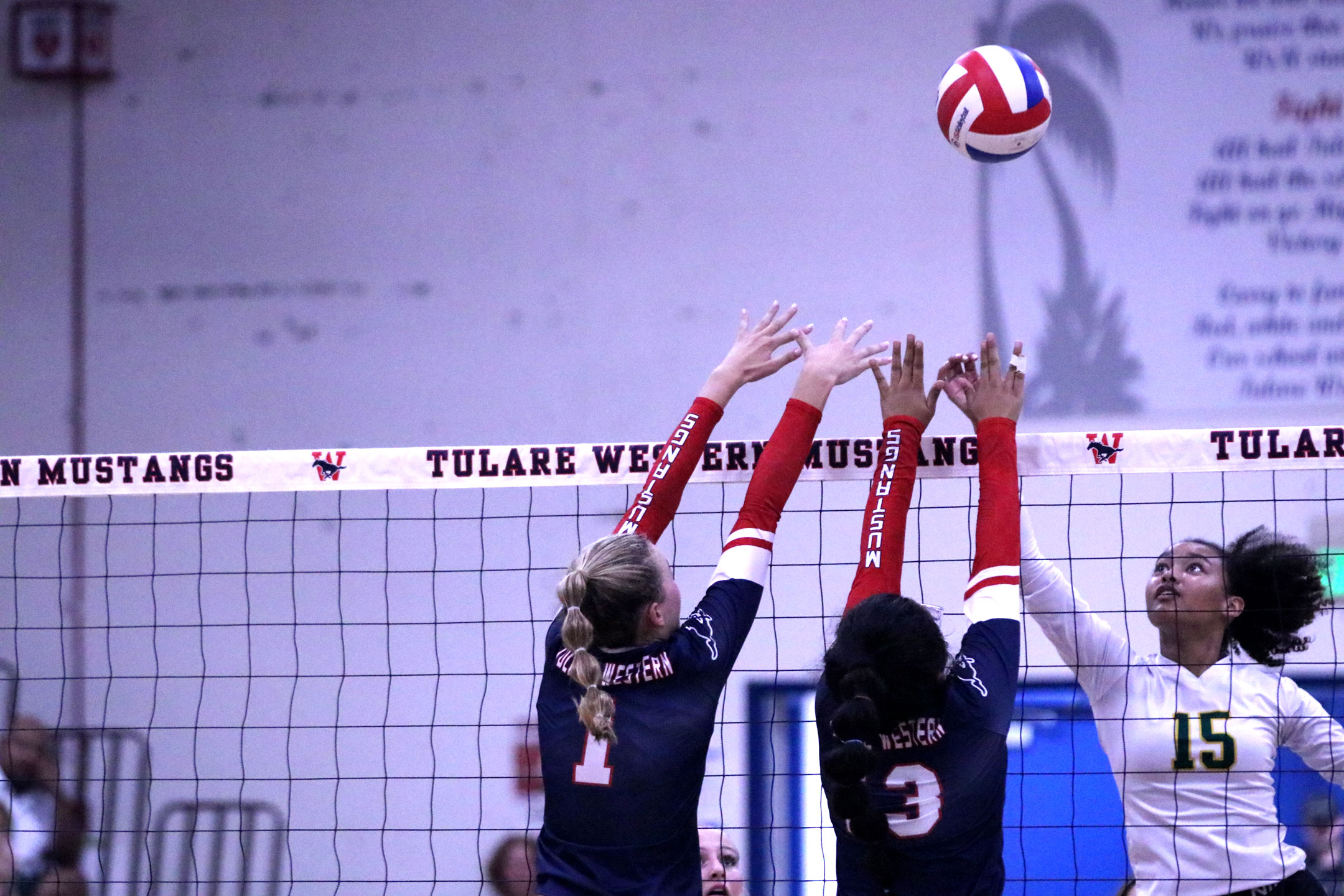 Tulare Western tries to block a hit at the net against the Sierra Pacific Golden Bears. The Mustangs lost in four sets, 3-1, while on their home court. Photo by Claire Livingston

According to Taylor, the games will only get tougher for Tulare Western. As non-league play finishes up in September, they will move into league play, where teams will put up more of a fight as they’ve had more practice under their belts. The Mustangs will travel to Hanford West on Aug. 31.

“My offense and defense need to put the ball in the court every single time,” Avila said of her goals for the team. “I think the girls will pull it together and get through [the season].”

Sierra Pacific did lose a few points to outs, but not so many that it cost them the game. The Golden Bears will face San Joaquin Memorial at home on Sept. 1.