STRATHMORE – The undefeated Porterville Panthers traveled just ten minutes down the road to play the Strathmore Spartans and returned home with another 3-0 sweep on their record.

Despite missing two key defensive players, the Porterville Panthers quickly took care of business on Aug. 30. Defensive specialists Ramona Ianneo and Alyssa Ibarro were absent from the lineup, but the rest of the roster filled in the gaps and only allowed the Spartans 31 total points over three sets.

“For the girls to step into those roles and play hard tonight,” Porterville head coach Lisa Davis said. “I think it really shows how balanced we are from top to bottom.”

In the first set, the Panthers quickly pulled ahead. With three hitters at six feet or taller, the Panthers have made kills their specialty. The Spartans struggled to dig out tough balls and fought for every point. Unfortunately that wasn’t many. Porterville won the first set 25-7. 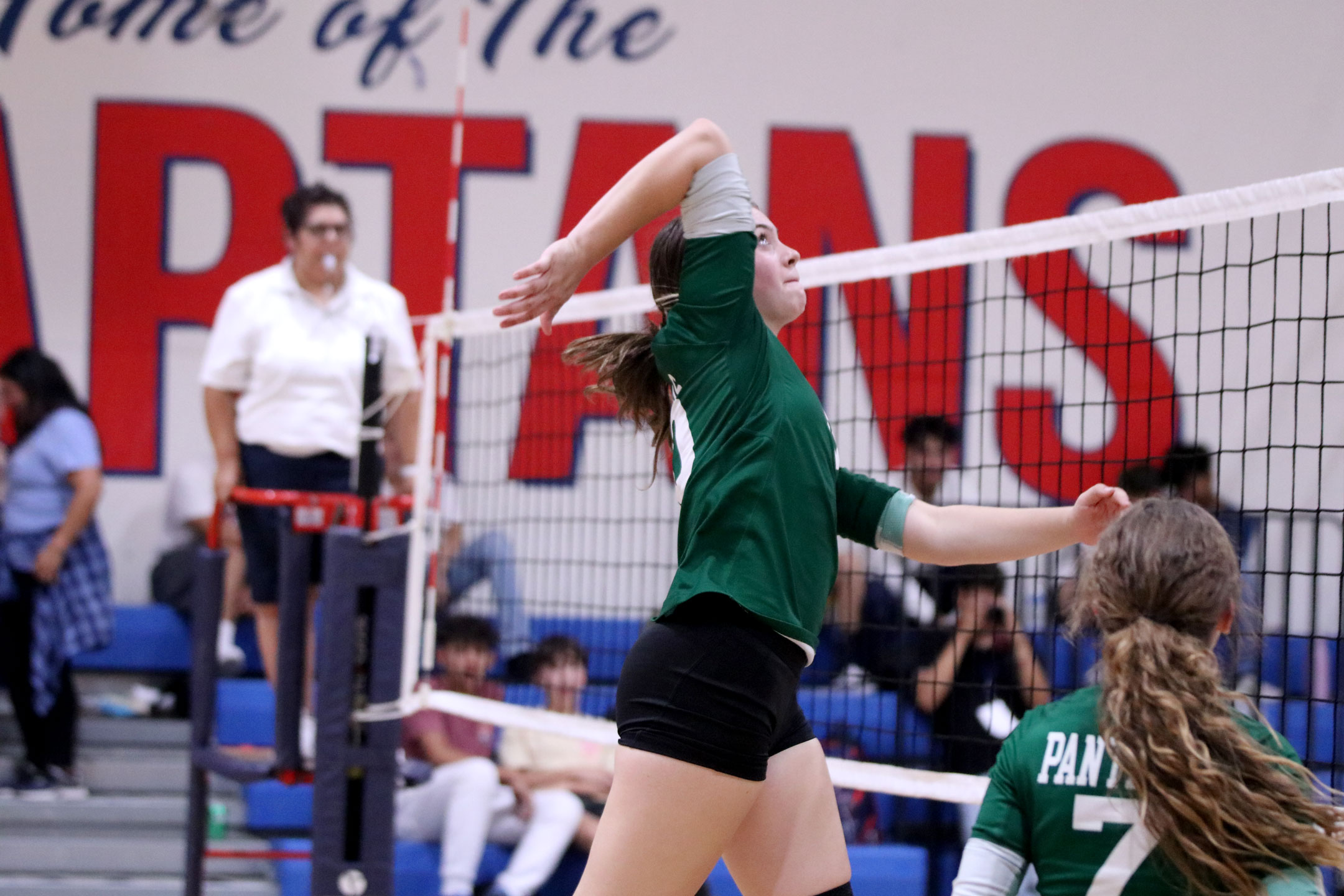 Porterville winds up to put down a kill over the Starthmore Spartan defense during a dominant sweep for the Panthers on Aug. 30. Photo by Claire Livingston

“We tried to get ready for those kills,” Strathmore head coach Fidelina Camacho said. “We knew they had kills, but we fell a little bit short.”

In the second set, the Spartans seemed to figure out how to get under some of the Panthers’ lethal kills, and managed to trade points back and forth for most of the set. The gym was unairconditioned and so hot that the officials began calling mandatory breaks for water when the first team reached 15 points.

“We’re not practicing tomorrow,” Davis said. “It was too hot and they need to get hydrated.”

Waiting for the third set to start, the Spartans were dragging, but the Panthers remained relaxed and smiling. Senior Mylah Niksa went around to each of her teammates to hype them up with a unique handshake for each of them.

The set started with an 11-point service streak from Porterville setter Natalie Rankin, who put her team up 11-1. In the seven games before this, she already had 15 aces.

“She’s just a solid player all around,” Davis said. “She has that really quick snap on her serve and when she gets on a roll, she’s tough to stop.” 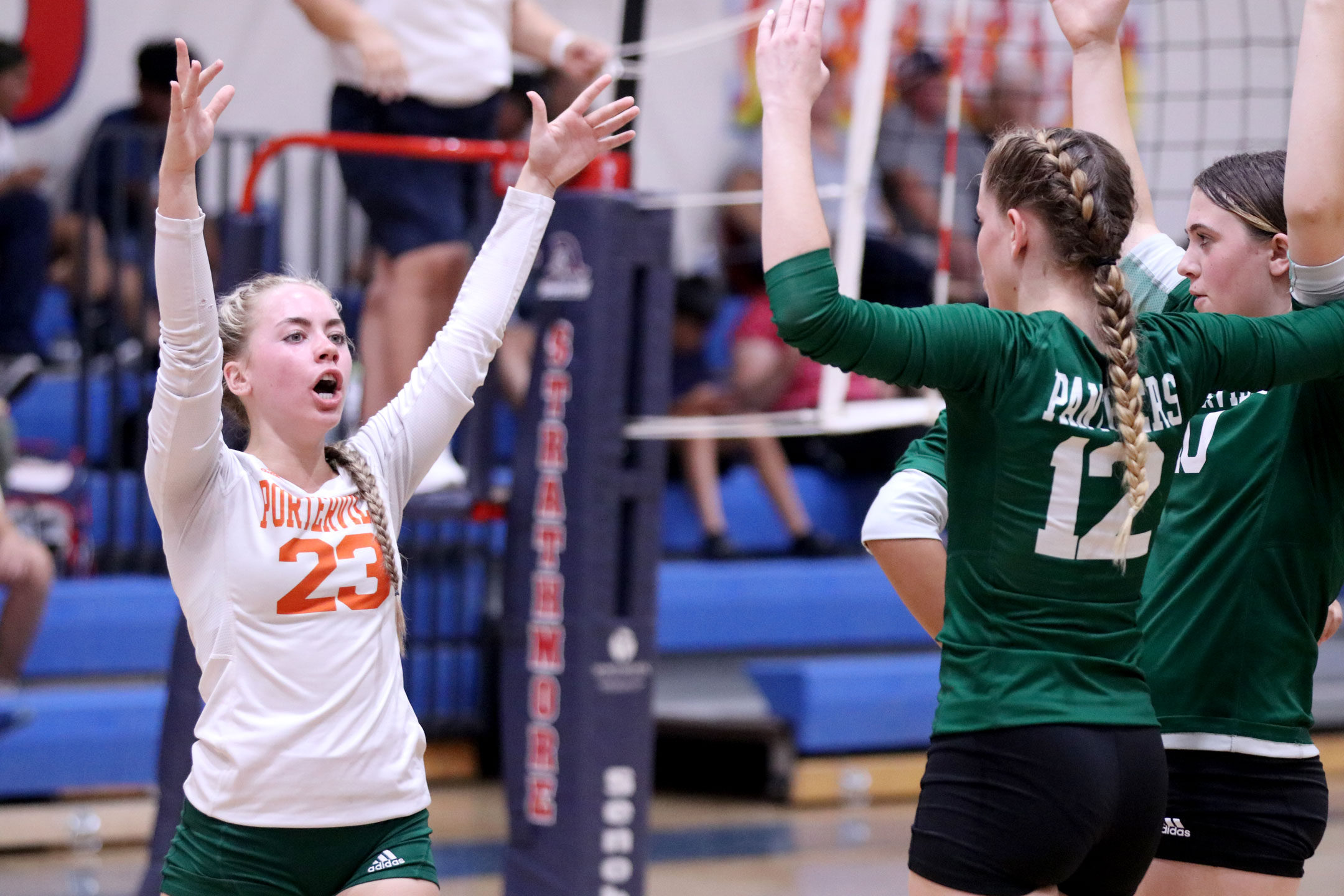 Porterville senior Hailey Allen (left) and Jaaci Patterson celebrate after one of their kills against the Spartans. Photo by Claire Livingston

The third set finished exactly like the first with a final score of 25-7.

“[My team] played their hearts out,” Camacho said. “I couldn’t have asked for anything more.”

Camacho said that her team is rebuilding and that the team feels good about how they prepared and played for the match against Porterville. Strathmore will face Orosi at home on Sept. 1.

“For us to be able to play like we did and play hard,” Davis said. “I’m really proud of them.”

The Panthers will look to continue their undefeated streak when they face Hanford at home on Sept. 1. Davis said Hanford will be a challenge and she hopes the day of rest will help the girls be ready to play.