PORTERVILLE – In the two varsity water polo games between Tulare Western and Monache, each side went home with one win. The Monache Marauders won the boys varsity game, while the Tulare Western Mustangs were so far ahead they attempted a ‘goalie goal’. 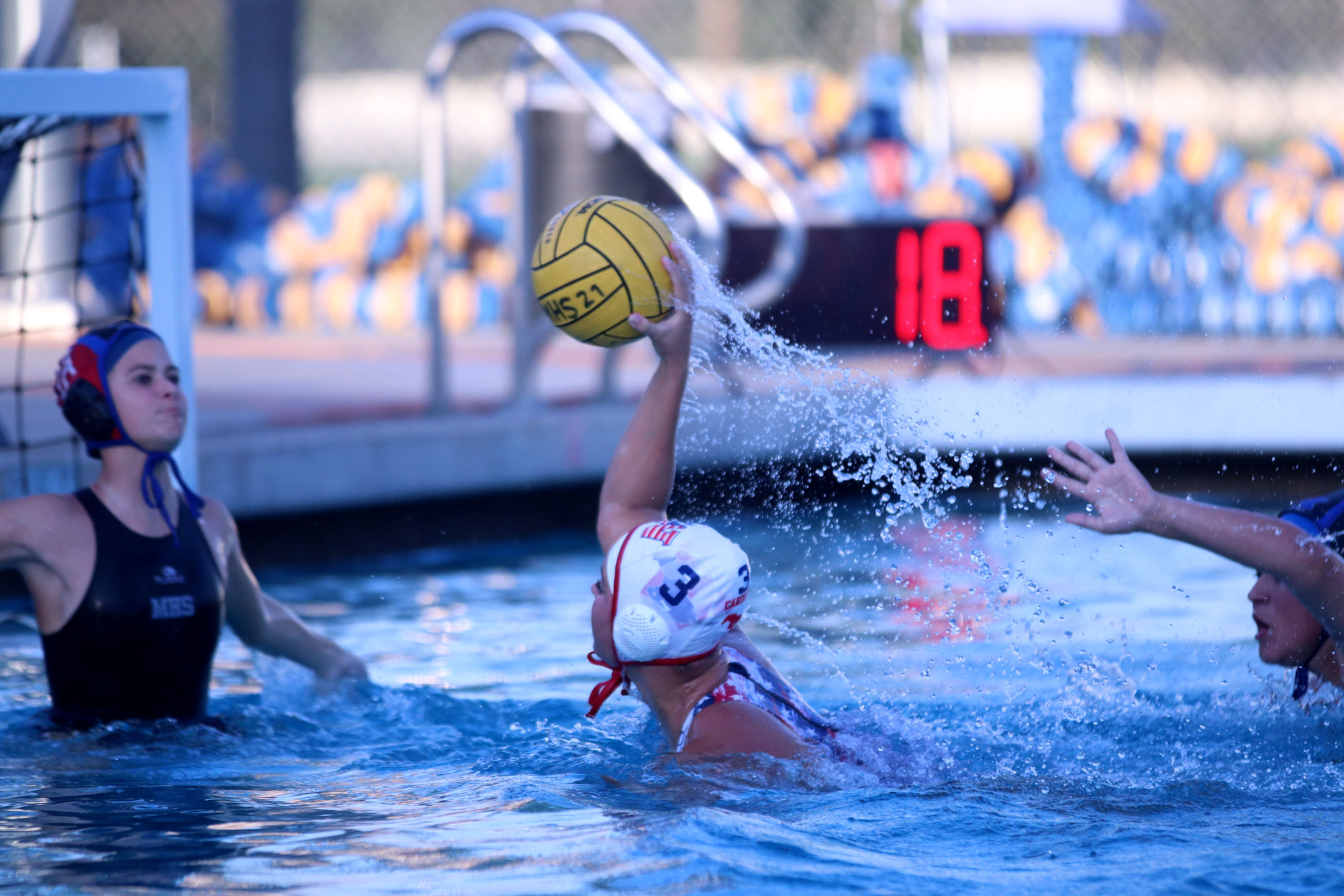 The Tulare Western Mustangs came out fast and strong on both offense and defense. They scored first and kept scoring. Monache was slow to get back on defense and their goalie struggled against the dominant Mustang offense. By the end of the third, Tulare Western was so far ahead their coach allowed them to have some fun and attempt a goalie goal.

“We were really trying [to get the goalie goal],” Tulare Western head coach Jenna McGuire said. “It’s always fun to mix it up and give them something outside of the monotony, something to aim for.”

A goalie goal is exactly what it sounds like. Normally in water polo, the goalie stays within the goal, coming out a little bit to throw the ball down the pool to their teammates. They play similarly to soccer goalies, just in the water.

What Tulare Western attempted involved their goalie swimming all the way down the pool into an offensive position and leaving their net completely defenseless. Tulare Western was ahead 20-3 entering the final period, so a few empty net goals would not be a big threat to their lead. 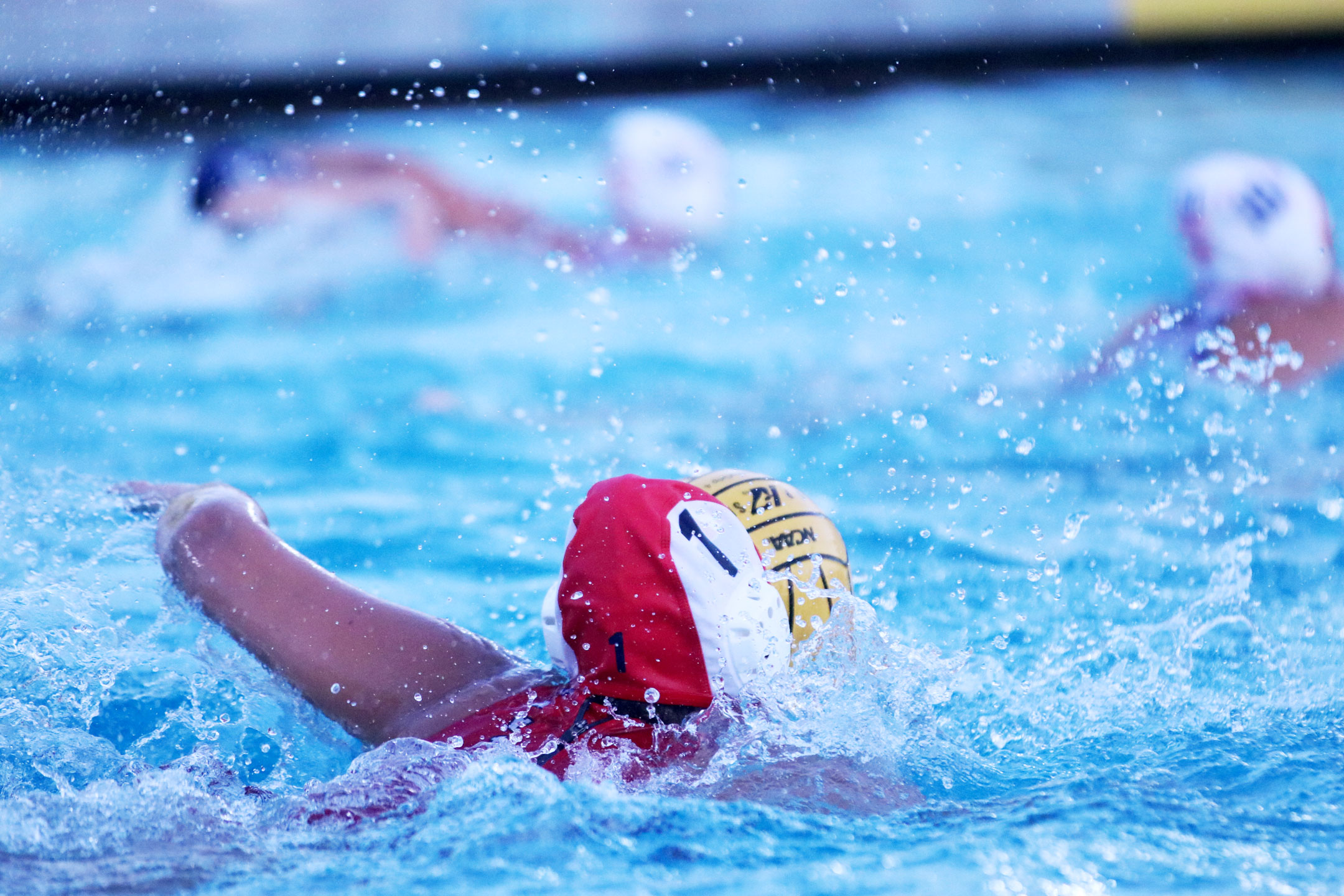 Western goalie dribbles ball to try for a 'goalie goal.'Photo by Claire Livingston

The Mustangs put six points on the board in the first period. The Marauders scored their first goal with two minutes left in the first, but wouldn’t score another until after halftime. In the second period, the Mustangs scored within ten seconds and proceeded to score on nearly every drive. Tulare Western wasn’t just strong on offense, they were so strong on defense they wouldn’t let Monache within scoring distance of the goal. The teams went to halftime with the Mustangs up 15-1.

“We worked on defense,” Monache head coach Hilary Johnson said. “They got some nice play time against a team that’s really experienced.”

In the third period, the Mustangs slowed down their scoring drive. They put up five more points and allowed two goals from the Marauders. Monache put up two goals in the last two minutes of the third, making it 20-3 heading into the fourth.

Tulare Western immediately sent out their goalie for a goal in the fourth. She made three attempts at a goalie goal. After the first one, Monache attempted to score on the empty net from halfway across the pool, but the shot went wide. On the next two attempts, another player hung back to defend the net.

“We didn’t get [the goalie goal] but it was exciting to watch,” McGuire said. Several other players joked from the bench that it was the most swimming the goalie had done all season.

McGuire hopes some of the experimental things the team tried in the fourth period, including some long or especially quick passes, will help them throughout the season. She believes it is an attainable goal for them to win the West Yosemite League this season. Tulare Western has only one loss–against Redwood–out of five games this season. They will play at El Diamante next on Sept. 20.

“We’ve had some progress and some successes and some struggles this season,” Johnson said. “We’re gonna do a couple of tournaments and get up against some really experienced teams and be able to learn from those.”

The Marauders are a younger team that is rebuilding and Johnson says they struggle with communication in the water, reading the game and figuring out where to go from there. Monache will face Centennial in a tournament in Bakersfield on Sept. 6. 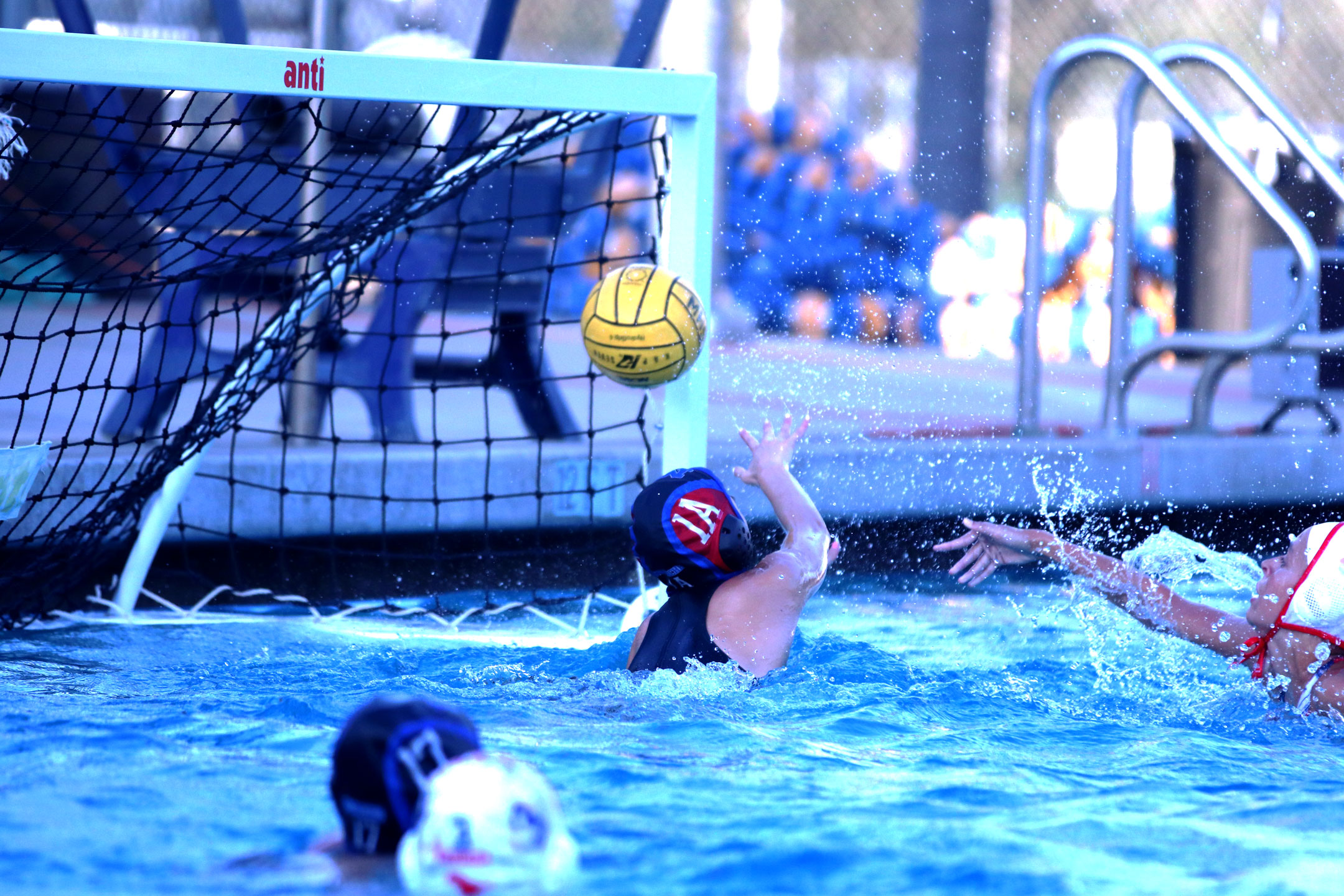 The Marauders were consistently aggressive on offense and strong on defense throughout the game. They pulled ahead quickly and stayed ahead throughout the game. Tulare Western began to put up an effort in the third and fourth period while at the same time Monache seemed to lose some of their steam. However, the Marauders never lost their lead. The Mustangs came within two points, but the Marauders got their legs back under them and started scoring on offense again.

“[Tulare Western] countered our mistakes,” Monache head coach Paul Suhovy said. “That’s what made it a closer game than we expected.”

The first quarter passed quickly, with Monache scoring several goals very quickly. Whenever Tulare Western got the ball, the Marauders quickly ended that possession, either through a steal or a block by the goalie.

“Wyatt Daniels is a very strong goalie when it comes to outside shots,” Suhovy said. “He’s phenomenal.”

The Mustangs only managed a single goal in the first period, while the Marauders scored five. 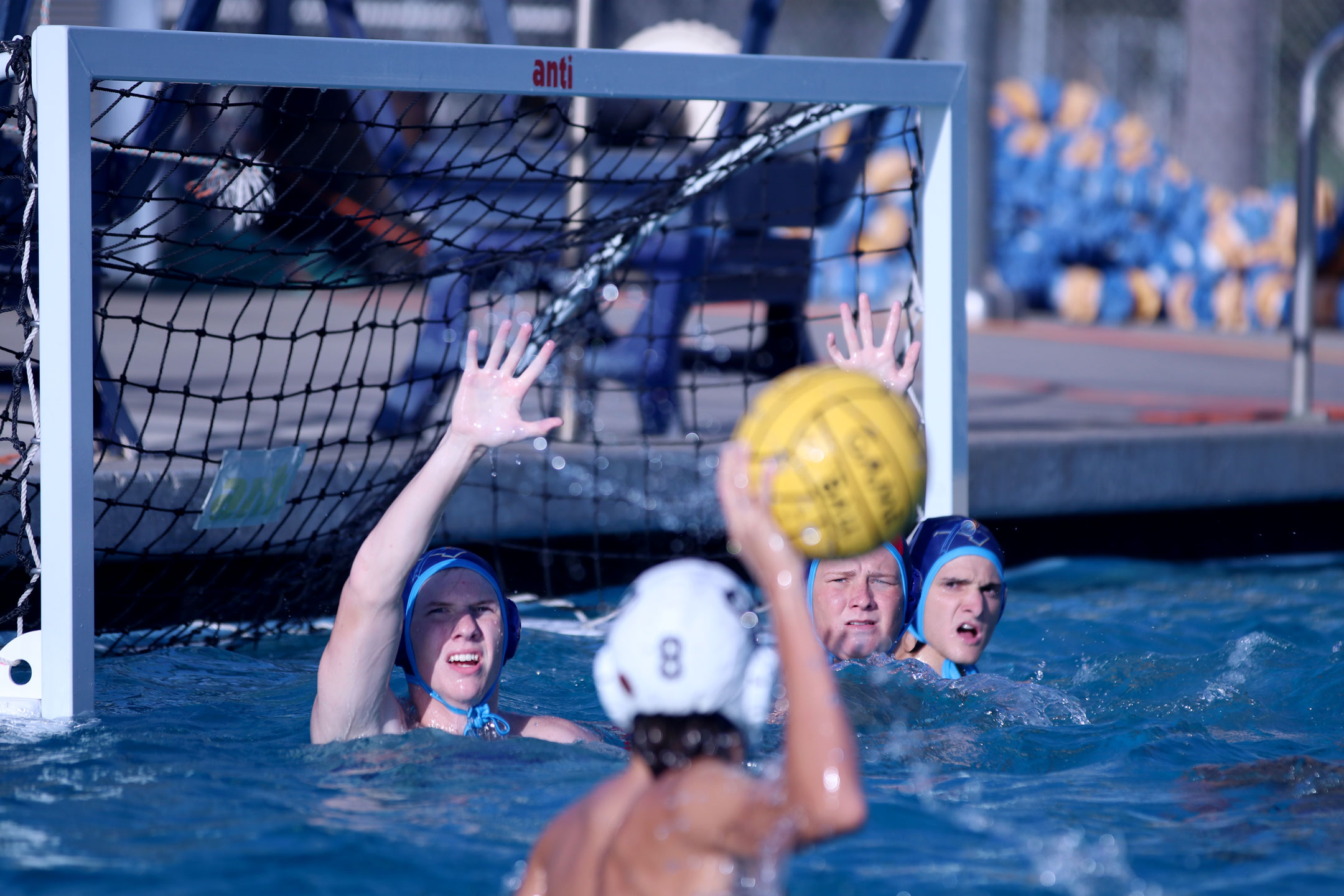 Several Marauders defend the goal from a Mustang looking to take the shot.Photo by Claire Livingston

Tulare Western put up more points in the first two minutes of the second period than they did in all of the first and seemed to have come back from the break with more drive and energy. The Marauders still put up five goals despite the Mustangs surging on offense, leaving the score 10-4 at halftime.

“At halftime I took some of the stress off of them,” Tulare Western head coach Davide Hodge said. “I said ‘we’re here to work on stuff, so go function and play together’ and we do better that way.”

After the break, Tulare Western came back and made the first goal. They really picked up their passing and began making effective plays on offense. Meanwhile, the Marauders seemed to have lost some of their steam and only scored one goal in the third quarter. At the end of the quarter, it was 11-9 in Monache’s favor. The Mustangs only needed to score three goals and to hold the Marauders on defense to win. 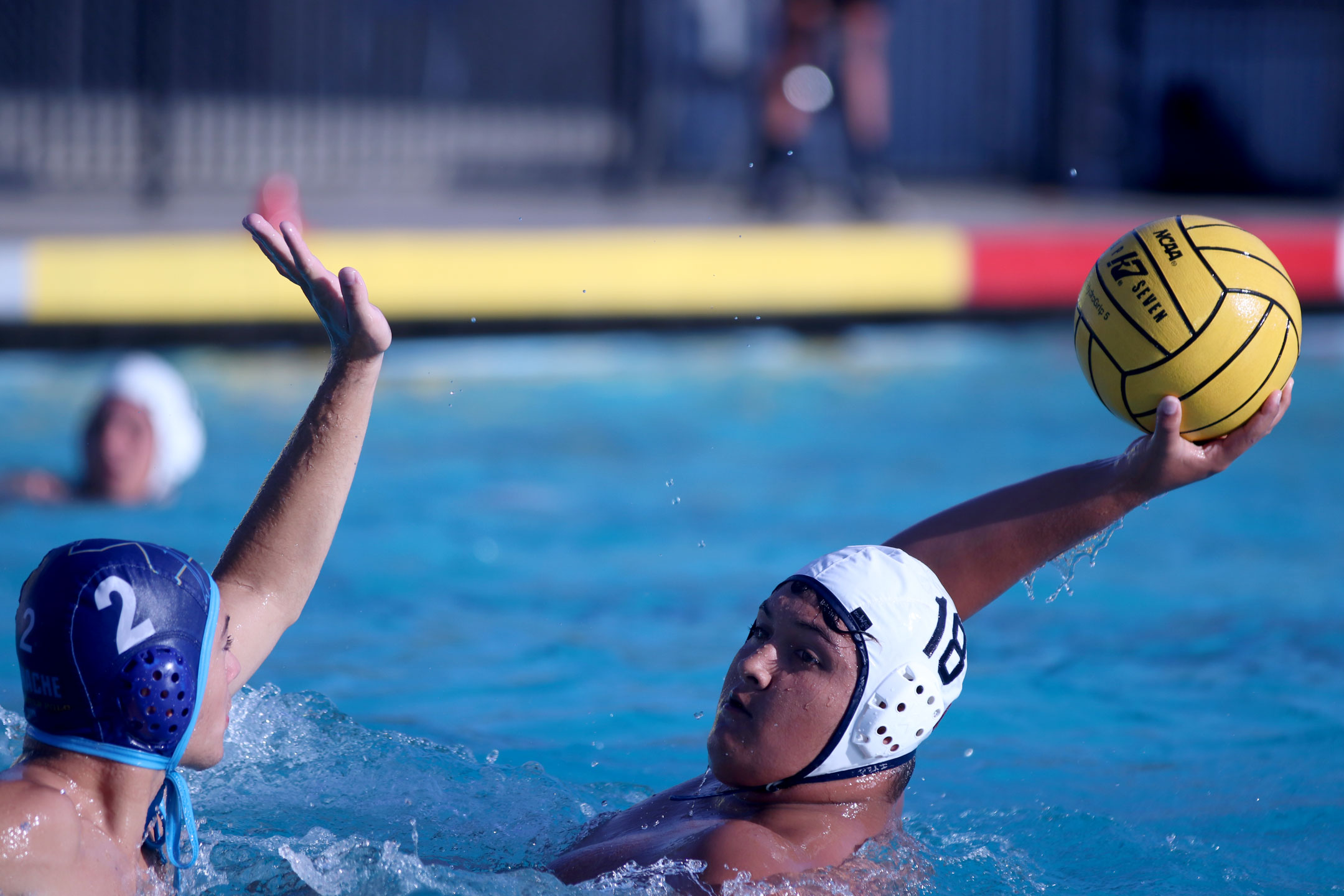 Mustang searches for teammate as Marauder presses him. Photo by Claire Livingston

Unfortunately for Tulare Western, the Marauders got their energy back. The Mustangs tried to close the gap but before they could score a single goal, Monache scored two and held strong on defense. The Mustangs managed two of the three goals they would have needed if the Marauders had not scored at all, but simply could not hold the defense. The Monache goalie continued to be a strong asset throughout the end of the game, which kept Tulare Western from even catching up.

“It’s a growing season and we’re growing a lot already,” Hodge said. “They’re really coachable so we can grow a lot between now and playoffs.”

With this loss, the Mustangs have a 4-4 record. They will begin league play at Mission Oak on Sept. 26.

“My boys’ goal is to take the league championship,” Suhoy said, “which we have a shot at as long as we step it up just a little bit more.” 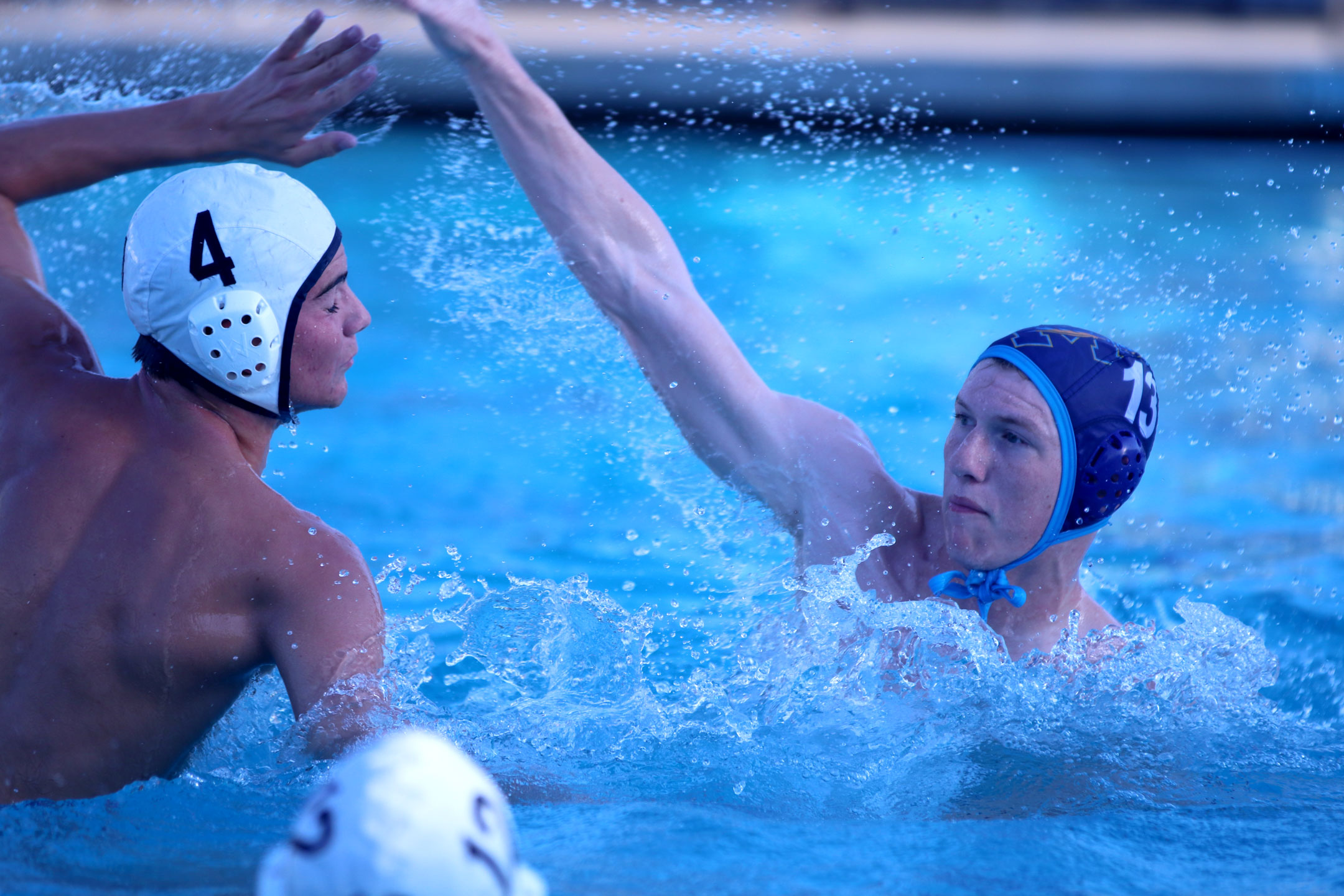 Mustangs battle to defend the Murauders.Photo by Claire Livingston

The Marauders stayed in the East Yosemite League along with Porterville High School and were joined by the four public Visalia high schools this year, while Tulare Western, Tulare Union and Mission Oak were sent to the West Yosemite League with Dinuba, Hanford and Lemoore. Monache will continue with a few more non-league games before league play begins. Their next game is at Centennial on Sept. 6.