TULSA – Olympic silver medalist Richard Torrez Jr. from Tulare continues his streak of knockouts on the professional circuit with a 44 second fight that left his opponent, Marco Canedo of Mexico, unconscious in the ring.

Torrez Jr. earned his third straight knockout 44 seconds into the first round of his fight on Aug. 27. Marco Canedo went face first onto the mat after a left and right combination delivered by Torrez as the referee signaled the end of the fight. Medical staff entered the ring to check on the unconscious Canedo.

“I feel good,” Torrez said. “It showed the preparation and the training camp went well. I went out there and I did what I had to do.” 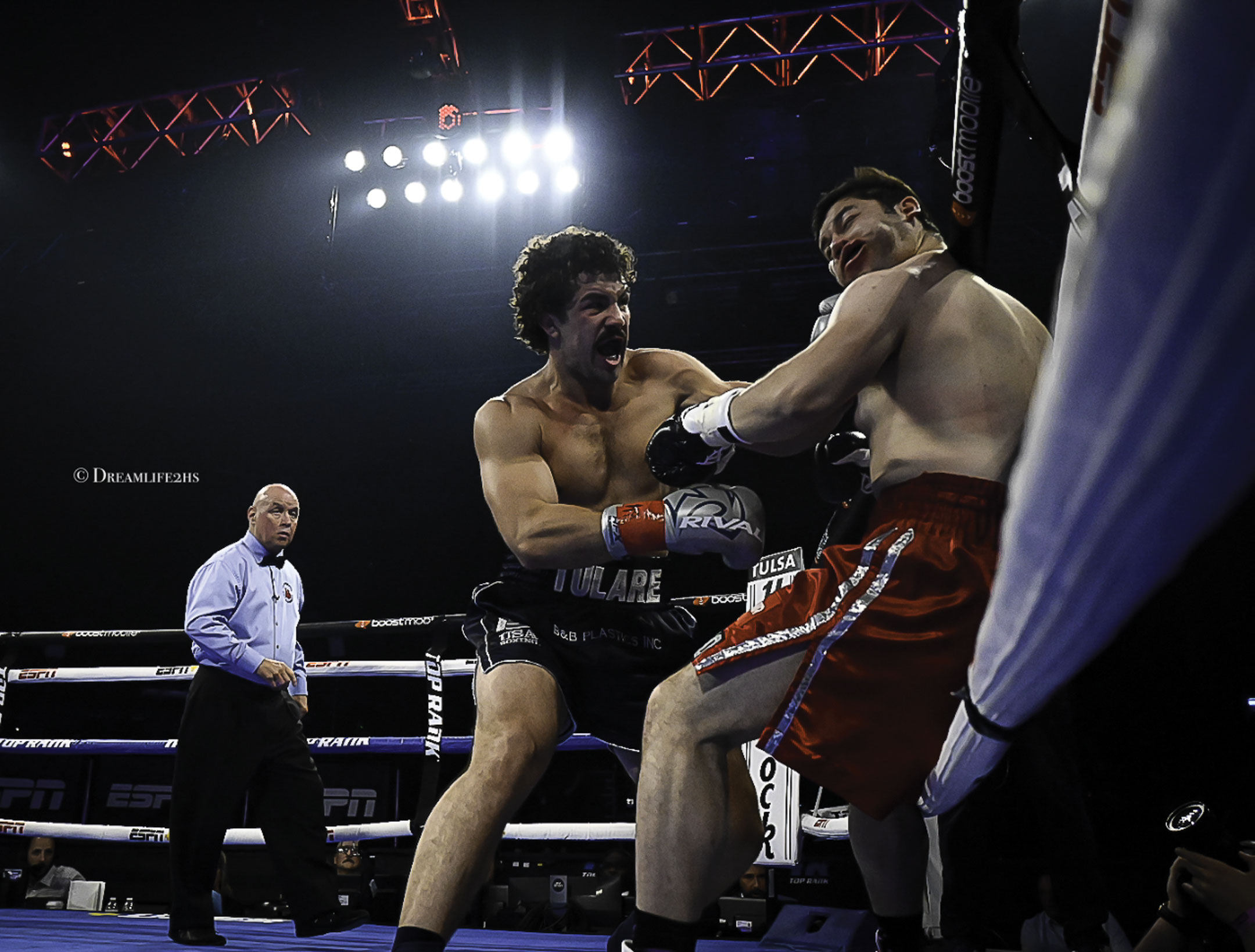 According to CompuBox, Torrez threw ten power blows and landed eight of them. Torrez knocked Canedo down within the first ten seconds of the fight and the referee called for a pause.  When the round resumed, Torrez backed Canedo into the ropes. Two left-handed blows and one right-handed blow sent Canedo down to the mat. The referee signaled the end of the fight 44 seconds into round one.

Medical staff entered the ring and worked to revive Canedo. In a show of respect, Torrez knelt in a neutral corner until Canedo was first able to sit on a stool, then brought to his feet and guided out of the ring to a waiting ambulance.

“It’s scary, you know?” Torrez said. “I checked back in with Top Rank [later] and I found out he had been released from the hospital the next day and was heading home.”

While the announcers were able to point out in slow-motion replays that Canedo was already unconscious before Torrez delivered his final right-handed blow. Torrez said he really didn’t notice because he doesn’t look at his opponent’s face when he’s throwing punches.

“I know where the head would be,” he said. “So when I’m throwing those punches I’m not looking at his eyes.”

In terms of the short fight, Torrez said he wouldn’t want it to go on any longer, because it shows that his training is paying off. Torrez spent time at the Olympic Training Center in Colorado Springs to prepare for the fight. 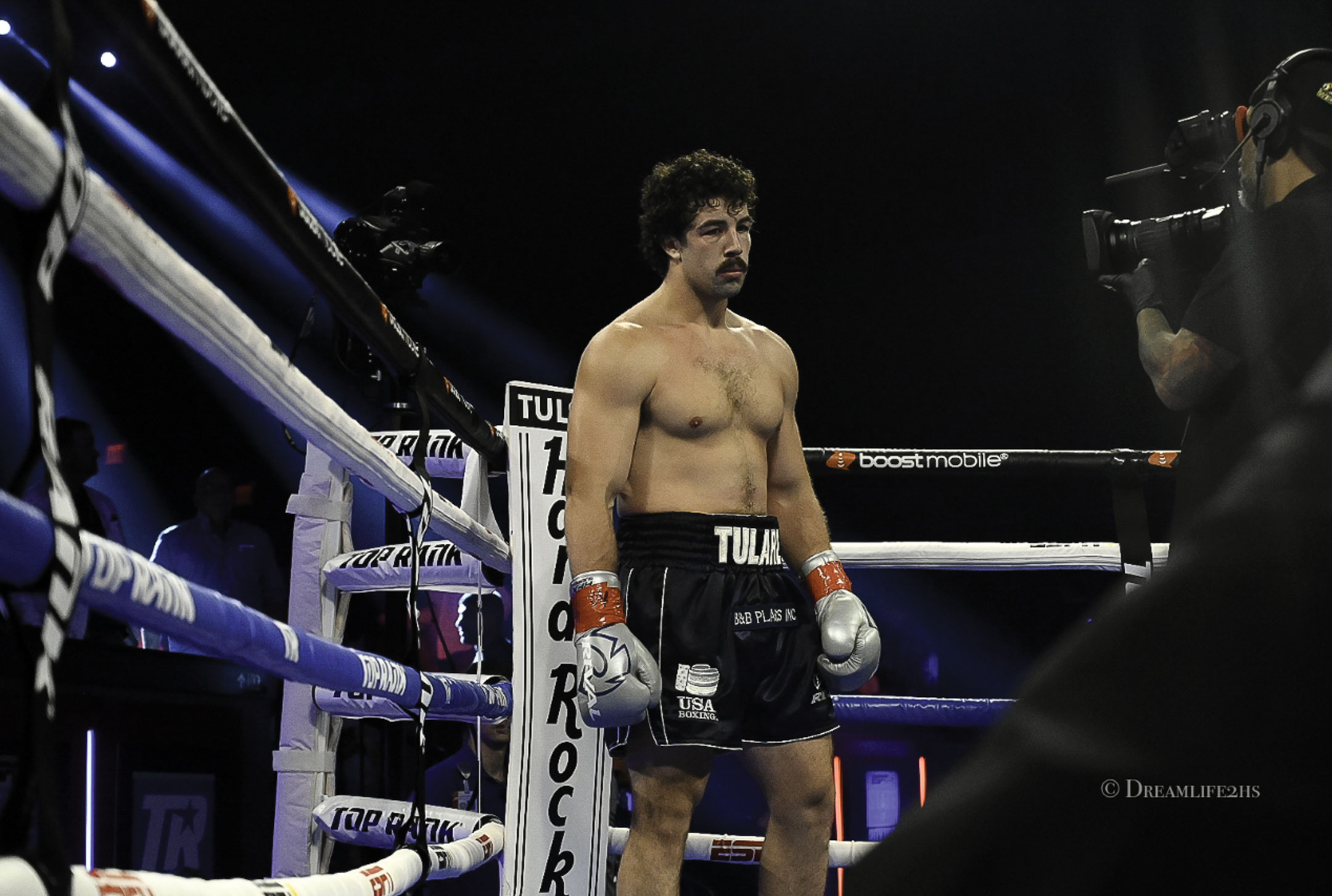 Torrez threw ten power blows and landed eight of them and knocked Canedo down within the first ten seconds of the fight.Photo by Javon Hill

After winning a silver medal at the Tokyo Olympics in 2021 and turning pro, Torrez became an ambassador for the USA boxing team. He goes to camps at the training center to help current members of the USA boxing team prepare for their fights and they help him prepare for his pro fights. He flew back to the training center after the fight on Aug. 27 to help with an Olympic camp.

Torrez has received a wave of support from Tulare County. From banners at The Lifestyle Center in Visalia to a message on the marquee at the Galaxy Theater in Tulare, Torrez is a local hero.

“It really makes me feel like I’m doing something great,” Torrez said. “If it wasn’t for Tulare and the community, I feel like it wouldn’t mean that much.”

In between training, Torrez is taking college courses on Tuesdays and Thursdays: a ballet class, a swimming class and a debate class. He said he prefers swimming for conditioning rather than running in the heat of the valley and the ballet class helps him with his footwork and awareness of his body.

Torrez currently does not have any upcoming fights scheduled and will spend time training at the Olympic Training Center in Colorado Springs.