VISALIA – Redwood ran away with the score at their homecoming game against Tulare Union, recording their first win 48-20.

The Redwood Rangers could not have had a more perfect setting for their first win: a homecoming game under the Friday night lights. After two losses against Centennial and Clovis North, the Rangers came out strong, scoring five touchdowns in the first half. Tulare Union countered with one touchdown, but Redwood’s lead was never in jeopardy. The Rangers won 48-20.

“Getting that first win in and getting the monkey off our back feels really good,” Redwood head coach Kevin Scharton said. 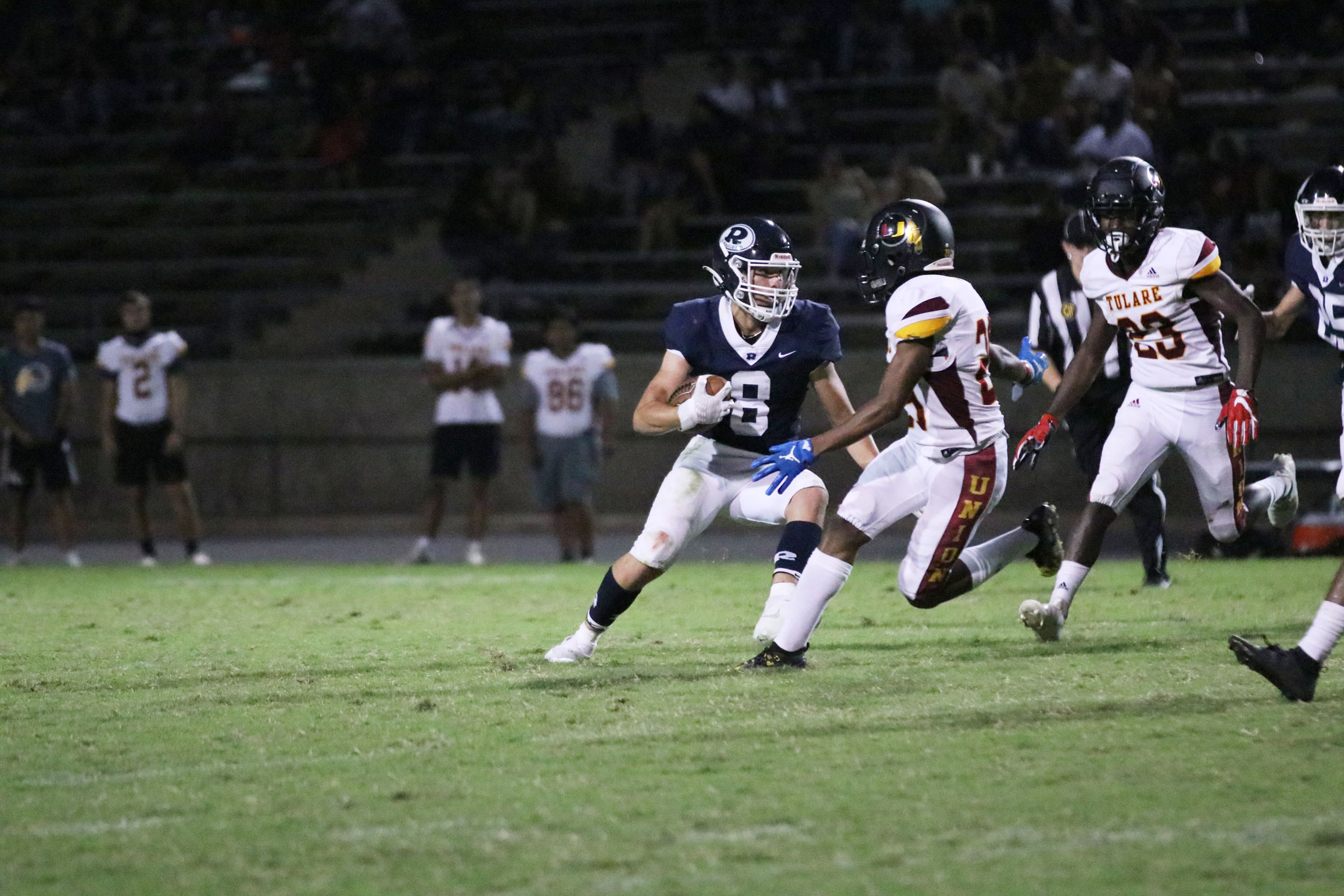 Cornerback Ambrose Bueno makes a run with the ball.Photo by Claire Livingston

With a full student section cheering for them, the Rangers came alive on both offense and defense. Although Tulare Union received the kickoff, they fumbled on second down and turned over the ball to Redwood, who scored within the first two minutes with a pass from quarterback Francisco Alvarez to running back Ty Potts.

The turnover and touchdown pattern repeated twice more in the first quarter, with passes to wide receivers Evan Galley and Moses Burk for touchdowns. Alvarez made sure to get the ball to different players, allowing several of the Rangers to record touchdowns. Going into halftime, Redwood was up 34-6.

“I don’t think there’s just one guy that stood out,” Scharton said. “That’s what makes us so special because that’s what we practiced.” 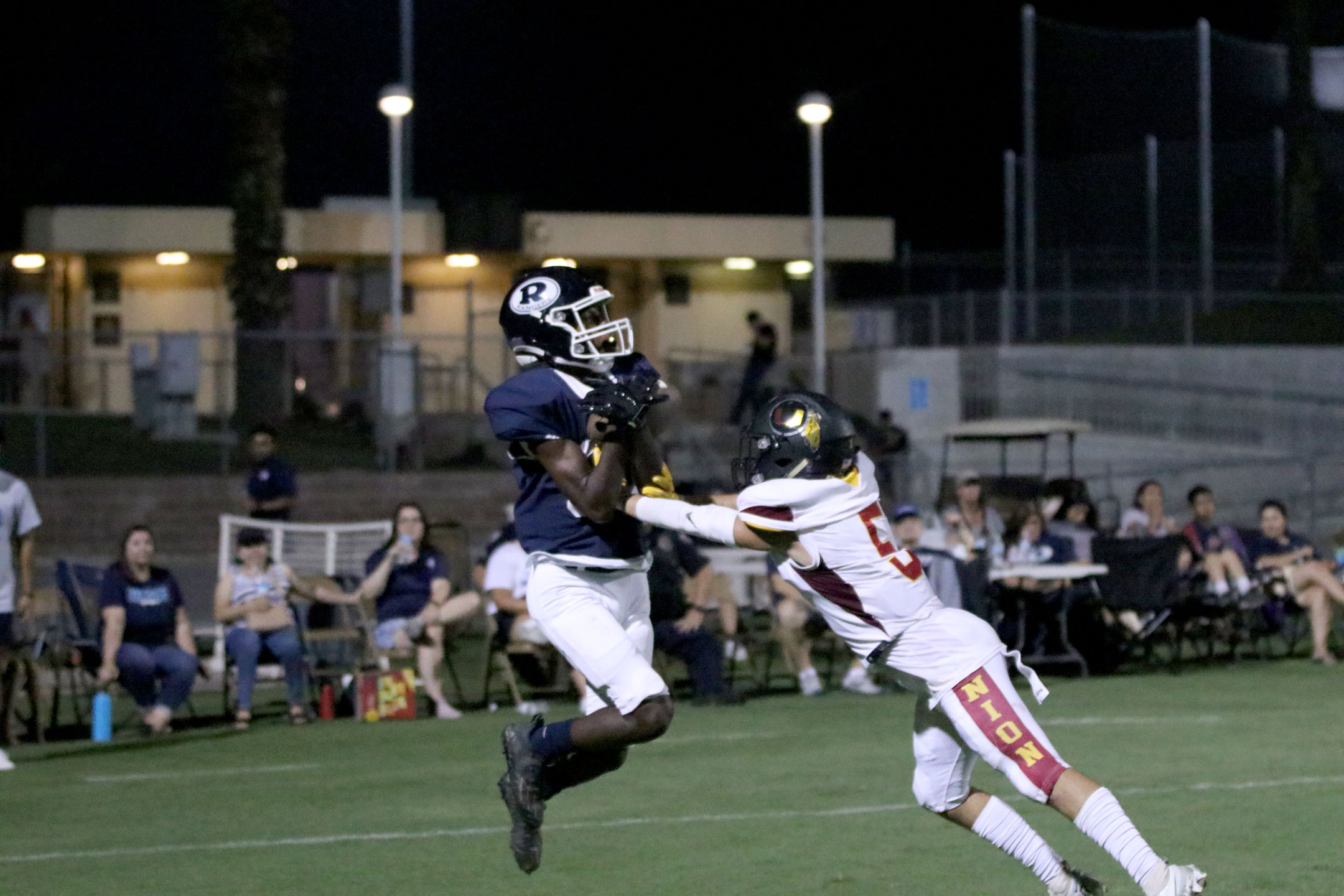 At halftime, middle linebacker Noe Viveros was crowned homecoming king. He seemed to be a favorite among the student section, with many wearing t-shirts in support of him. Viveros was one of the players Scharton brought to the East Yosemite League media conference held on Aug. 1 as a stand out player this year. As homecoming king, it’s clear the senior has an impact on and off the field. 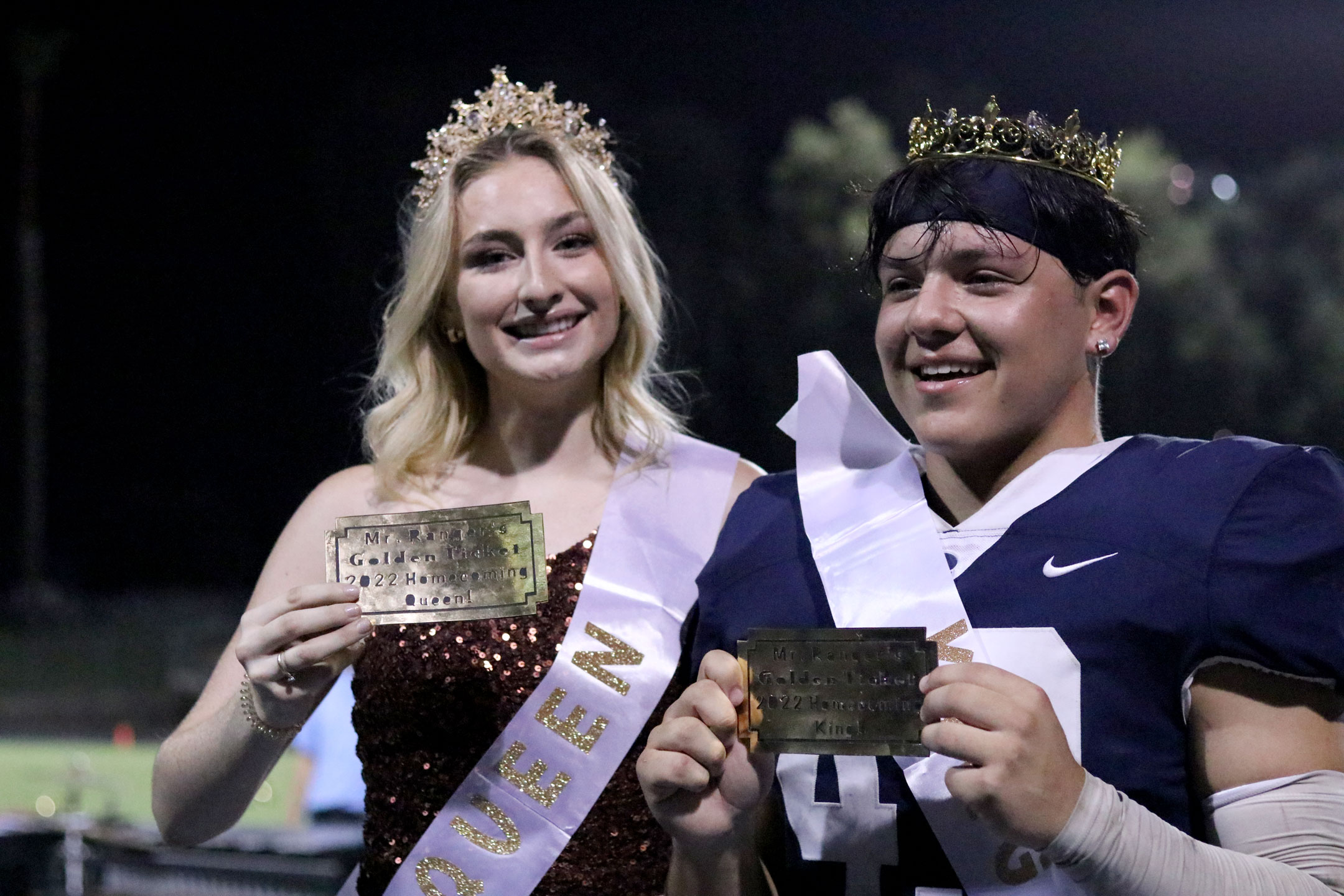 The Tribe attempted an onside kick after halftime, but touched the ball before it traveled ten yards, so Redwood got the ball on the 50-yard line. After punting the ball back and forth a couple times, Redwood finally got the ball on Tulare Union’s 26 and were able to score their sixth touchdown of the game, a rushing touchdown by wide receiver Jordan Nelson. 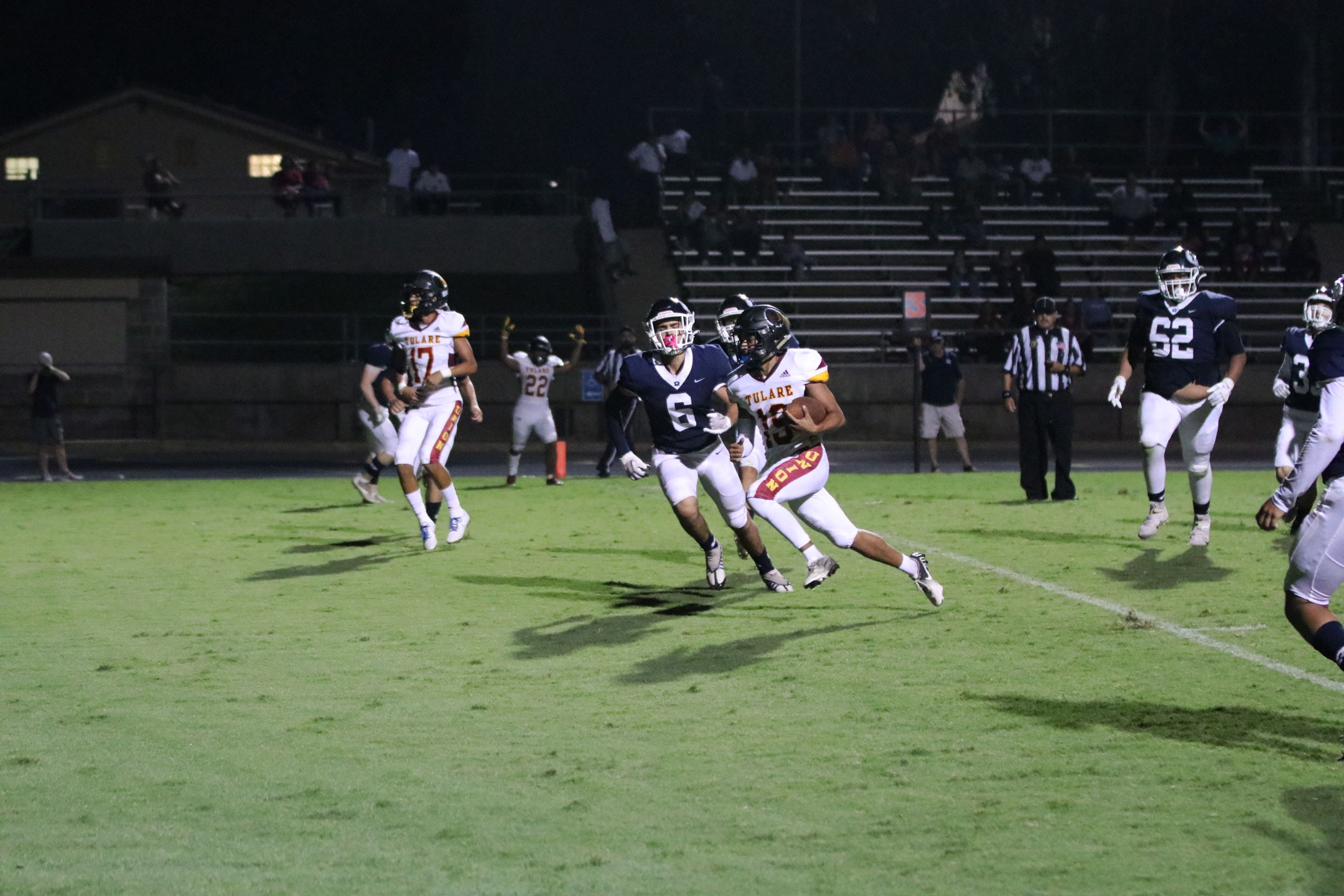 TRIBE was able to get through the Rangers and scored two touchdowns in the second half.Photo by Claire Livingston

The Redwood student section never lost their spirit for the team as the game wound down. They lit up for every touchdown scored. The Rangers’ final touchdown was a pass from Alvarez to wide receiver Jalon Wilkerson. The Tribe scored two more touchdowns in the second half, including one with only two minutes left, but there was no touching the Rangers. At homecoming, with their fans behind them, they couldn’t be stopped.

“We had a lot of guys out this week, but that doesn’t take away from the fact that Redwood is a really good football team,” Tulare Union head coach Darren Bennett said. 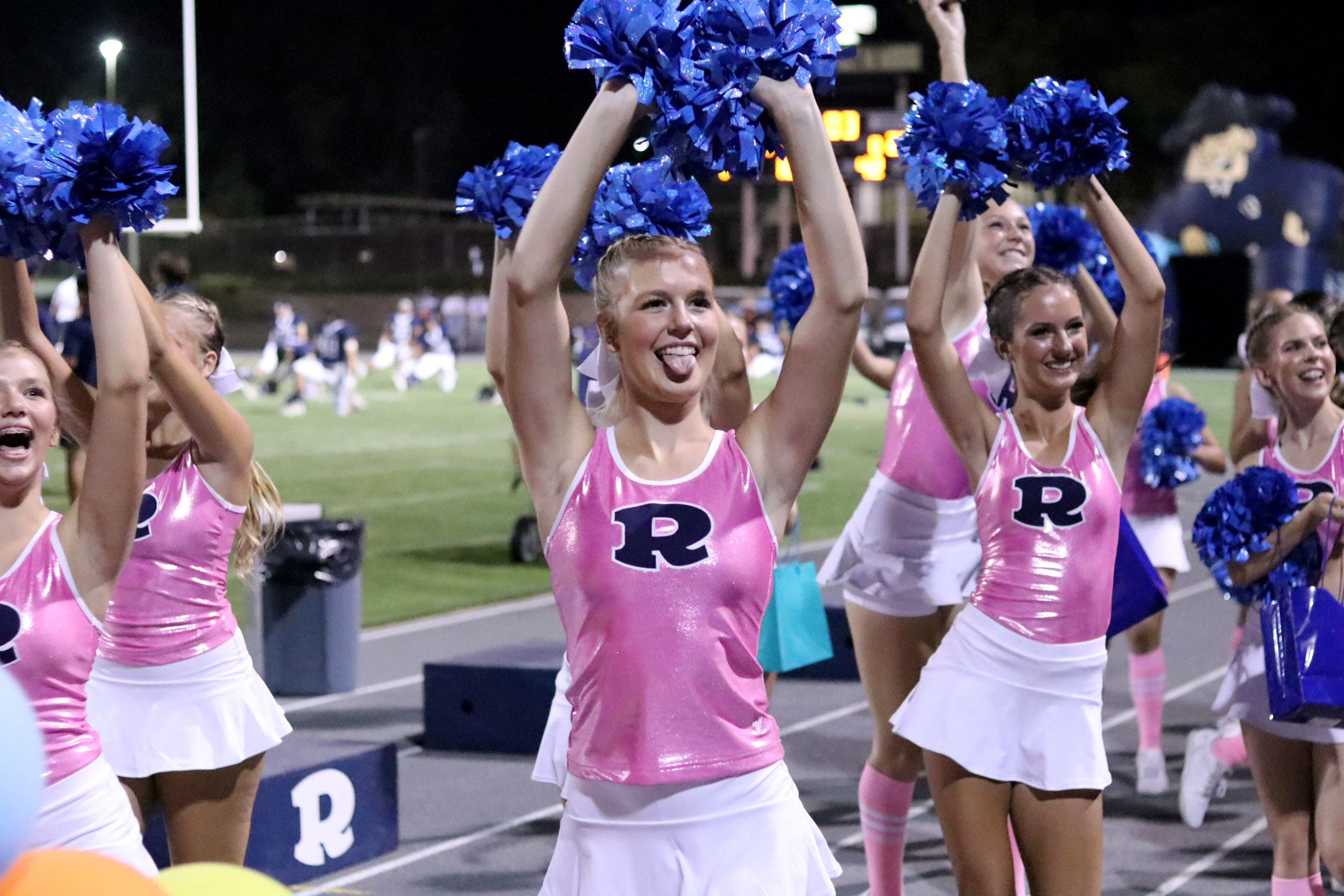 Cheer leaders cheered on the crown and Rangers had lots of support from crowd.Photo by Claire Livingston

“I look forward to the kids continuing to grow and learn and get better with each game,” Scharton said. “Hopefully when league comes around, we’ll be hitting on all cylinders.”

Redwood has an experienced team that played together last year. They finished third in the West Yosemite League last year and have been moved to the East Yosemite League with the other three Visalia public schools, joining Monache and Porterville. They will travel to Tulare Western on Sept. 9. 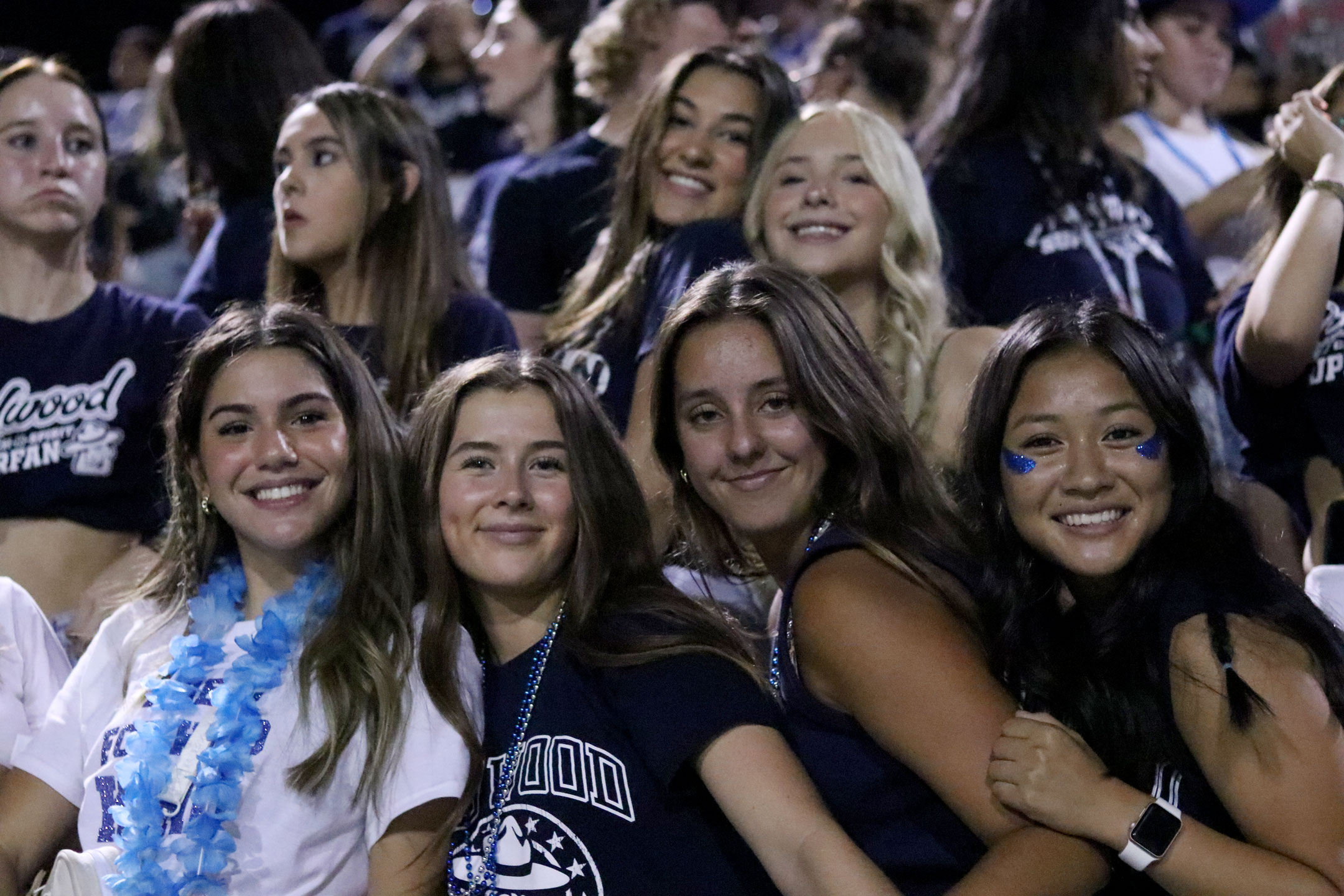 Rangers cheered on their football team all night and helped secure the win.Photo by Claire Livingston