Exeter brought out all the stops to honor the military and first responders ahead of 9/11. The students wore red, white and blue. The U.S. Army and Marine recruiters that come to campus made an appearance. The school sold t-shirts with a red, white and blue Monarch logo this week and gave them out with a t-shirt cannon during the game. The United States Air Force Squadron 112 color guard appeared for the flag ceremony before the game.

“There are bigger things than football,” Exeter’s athletic director Andrew Montes said. “One of them is this country and remembering the sacrifices of the military and those first responders on 9/11 and what they do for us every day.” 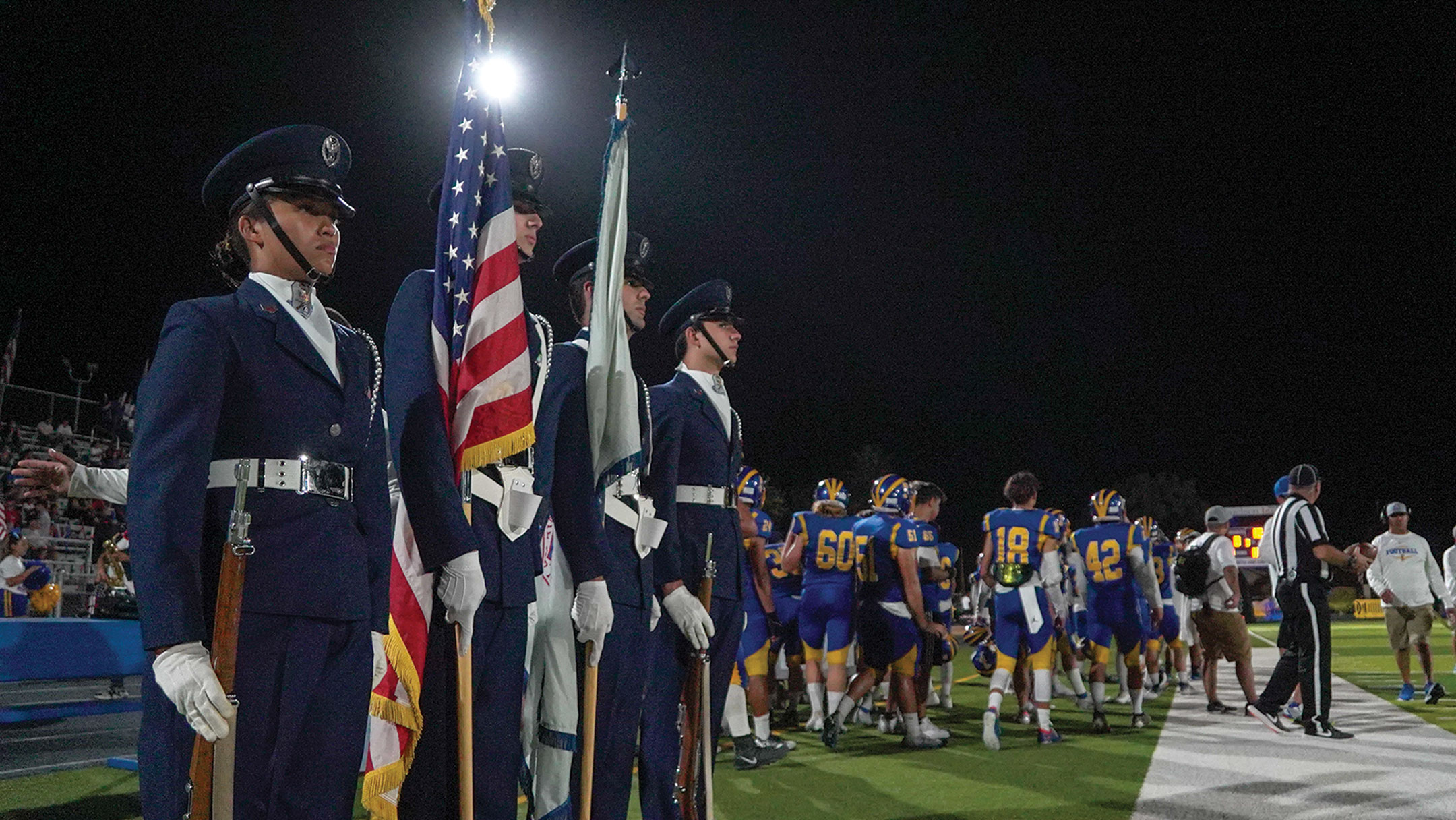 The United States Air Force Squadron 112 color guard appeared for the flag ceremony before the game. Photo by Rigo Moran

The biggest appearances were by the Tulare County Fire Department, who brought one of their engines decorated for the Monarchs and the Keith Williams truck.

Private First Class Keith Williams was killed in Afghanistan in 2014 when he was only 19 years old. In his memory, his mother, Debbie Tuttle decorated Williams’ truck and keeps it as a way to honor her son. The truck also honors the memory of Exeter native Daniel Volcker, who was killed in action in 2004.

Montes rides Harleys with the American Legion Riders and he invited the bikers to show up with their bikes to create the “rumble tunnel” for the players.

“We’re just a group of guys, patriots, who love this country and respect our veterans,” Montes said. 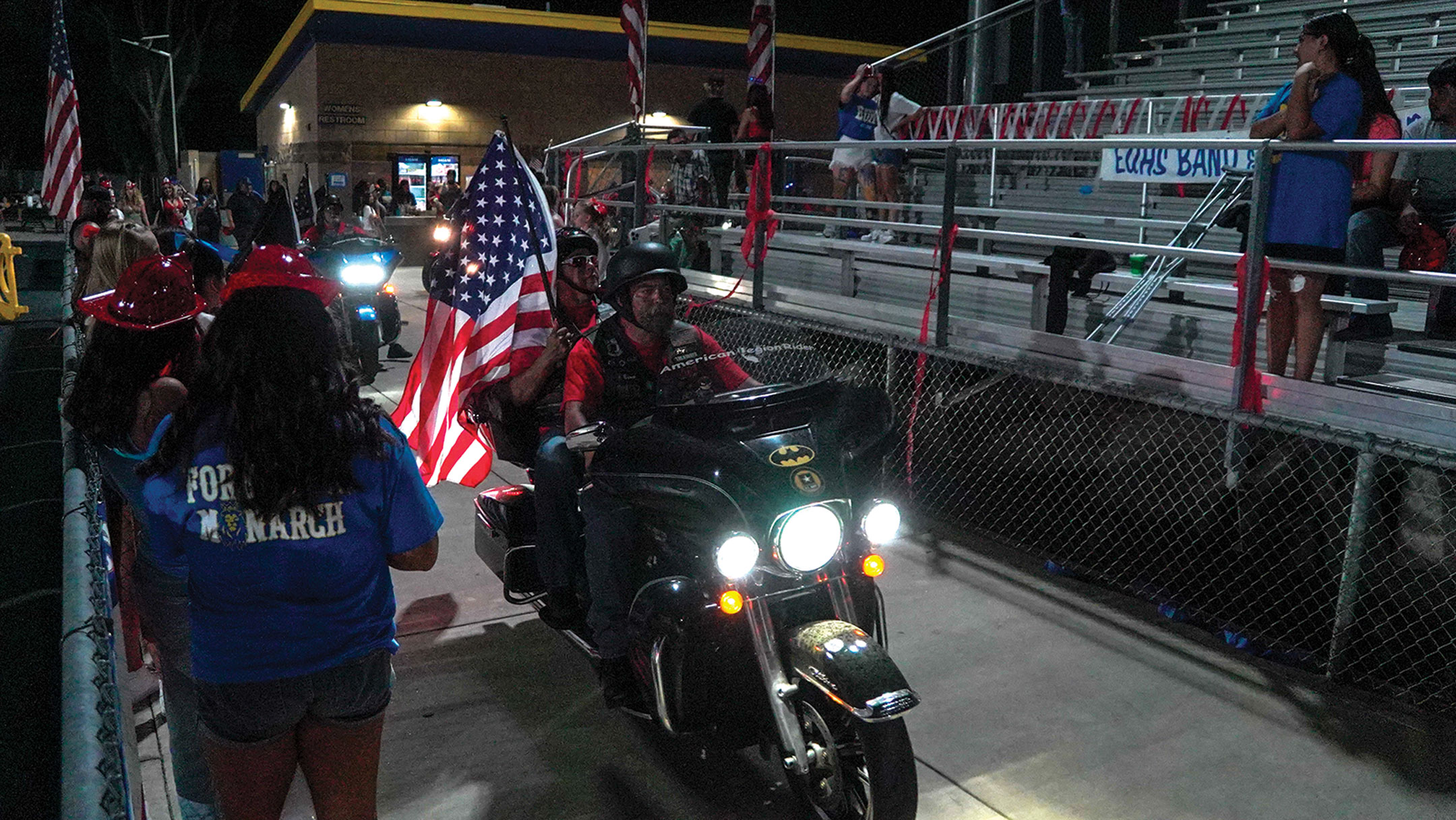 The goal for Montes was to draw the students’ attention to the fact that there are bigger things than just their school and football team. He hopes to put on this event every year, not just around 9/11.

“Instead of blue and gold,” Montes said, “we’re red, white and blue.”

Exeter head coach Keirsten Lamb felt it was important for his team to show support for their country and for first responders and was fully supportive of Montes during the organization of the event. He said that he grew up in a family of veterans, including his dad and brother.

“All the people we take for granted but are always there for us don’t always get that thank you that they deserve,” Lamb said. “It was very humbling walking into that stadium with all of those flags flying everywhere.” 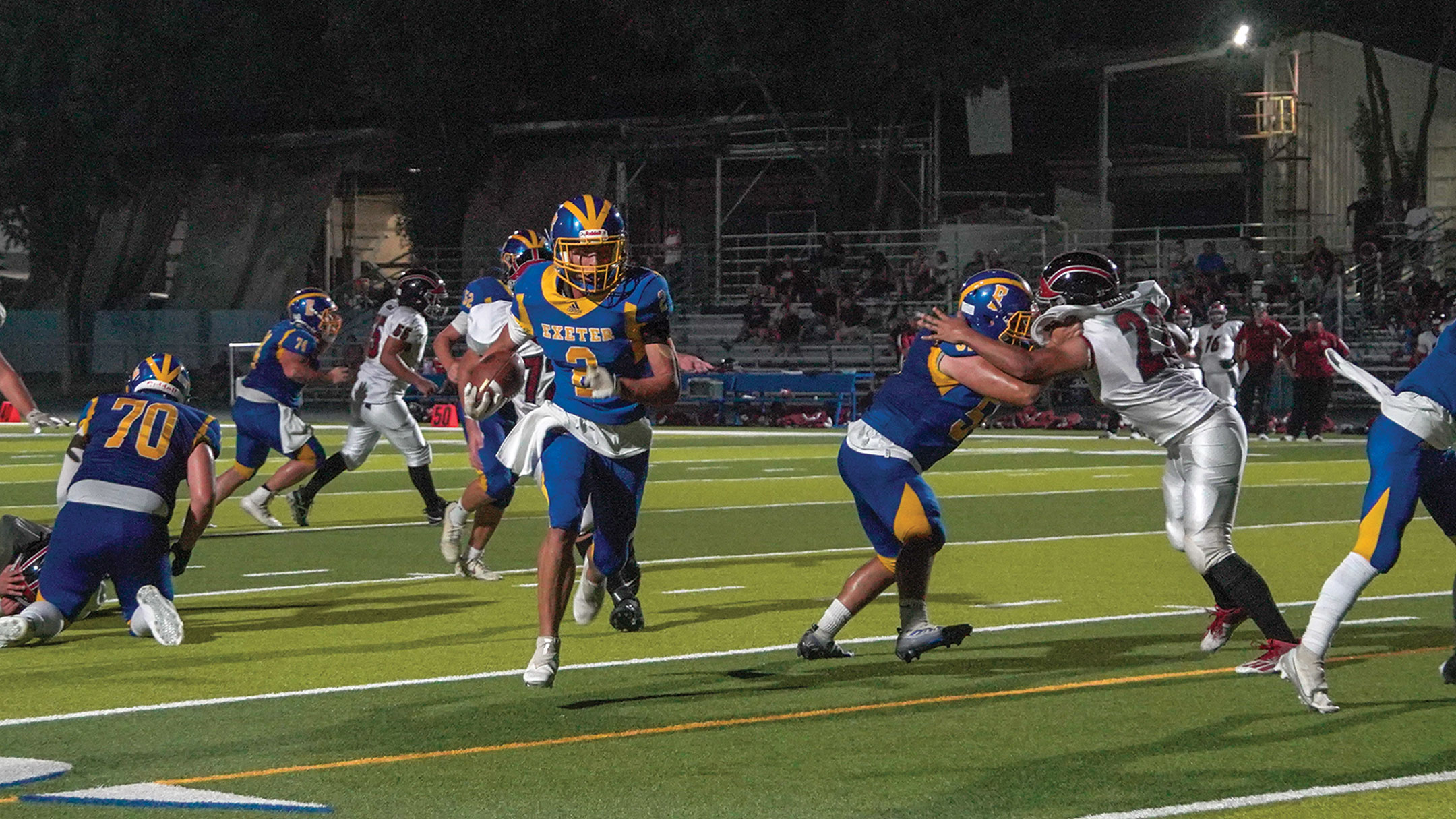 Monarchs defend number two as he runs the ball. Photo by Rigo Moran

Of course, nothing honors those who serve the country and community more than a 63-0 win at home for the Monarchs. It was the Monarchs’ third win of the season.

“Our defense played lights out and played tough, physical football,” Lamb said. “Offensively, a whole lot of guys ran the ball and did really well and it was probably the best game for our linemen.” 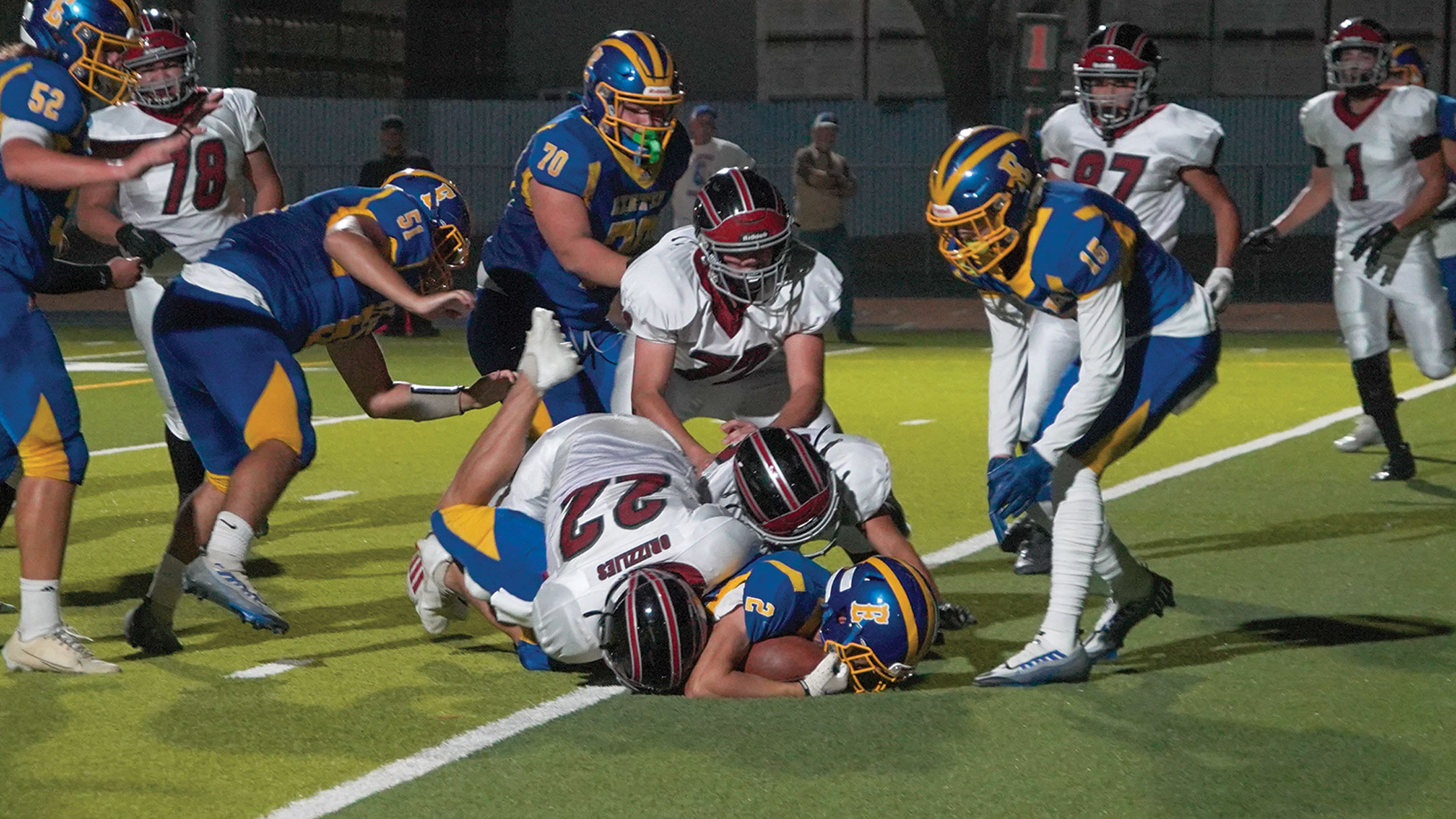 Grizzlies tackle Monarchs to stop the ball after a completed pass. Photo by Rigo Moran

During the game, the Monarchs quarterback Ruben Ruiz was ejected for unsportsmanlike conduct, but according to Lamb, he can’t see what the officials claim happened on film from the game, so the team will look into possibly appealing the ruling.

“Our guy who stepped in did a great job for us,” Lamb said. “He was able to run the offense and keep the chains moving.”

The Monarchs will have a bye week before facing their final non-league opponent, Porterville, on Sept. 23. 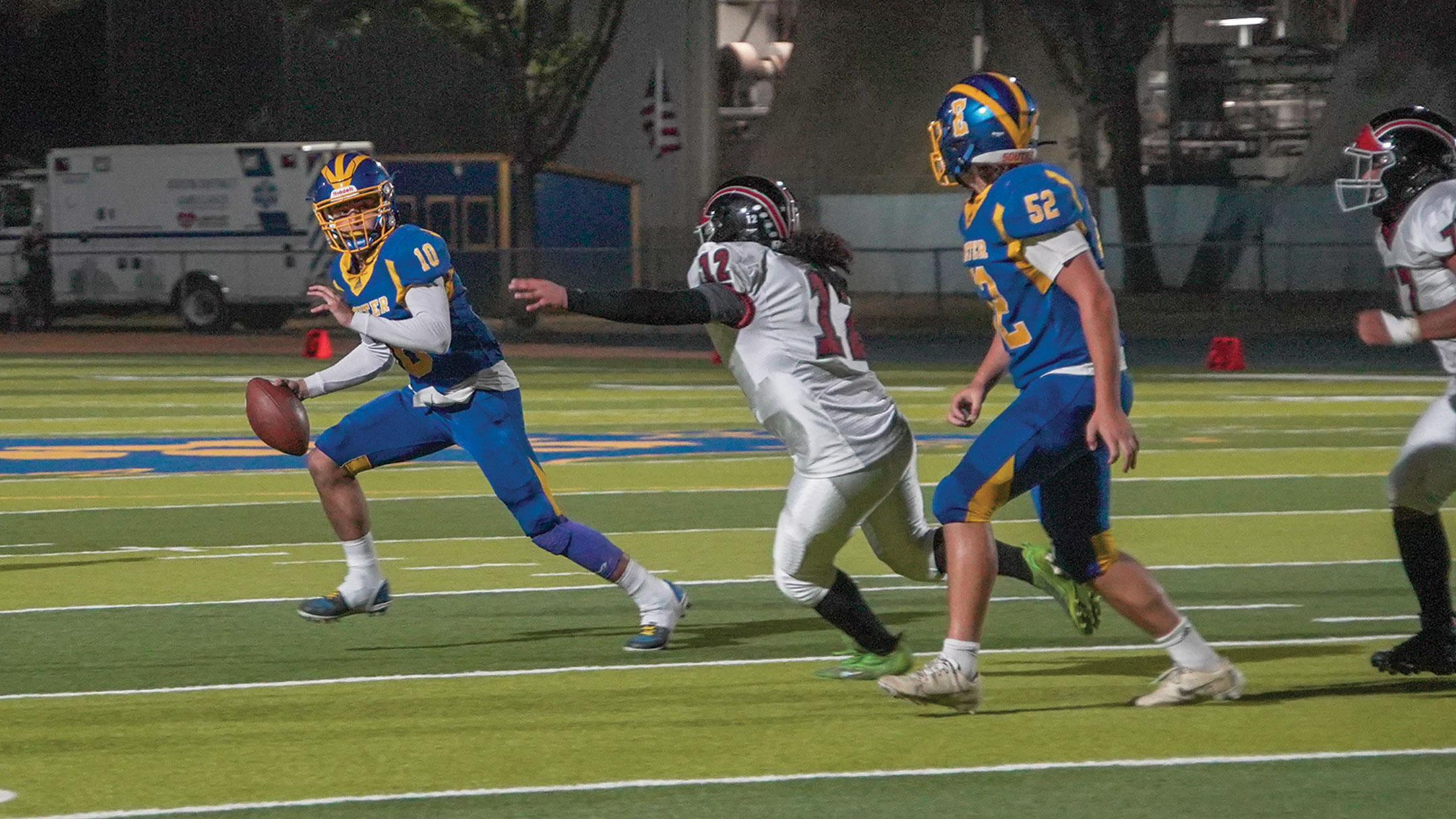 Monarch escapes Grizzly player while searching for a fellow player to pass to. Photo by Rigo Moran