The Redwood Rangers run over the Tulare Western Mustangs for their second win in a row, Mustangs learn the art of barefoot kicking

TULARE – The Redwood Rangers nearly shut out the Tulare Western Mustangs in a 30-7 game, during which, the Mustangs’ kicker rediscovered barefoot kicking.

The talk of the Redwood sideline throughout the game was Tulare Western’s kicker, Fernando Rodriguez, who kicked barefoot the entire game. It was a funny accident that happened due to the excessive heat this week. The Mustangs had planned to practice in the gym the day before the game, but it was only 100 degrees, so the special teams went outside to practice field goals. Unfortunately, Rodriguez forgot his cleats.

“He was kicking barefoot and that was the best he kicked all day.” Tulare Western head coach Derek Rosa said. “Jokingly we kind of suggested he kick barefoot during the game. He kicked barefoot in pregame and we just rolled with it.” 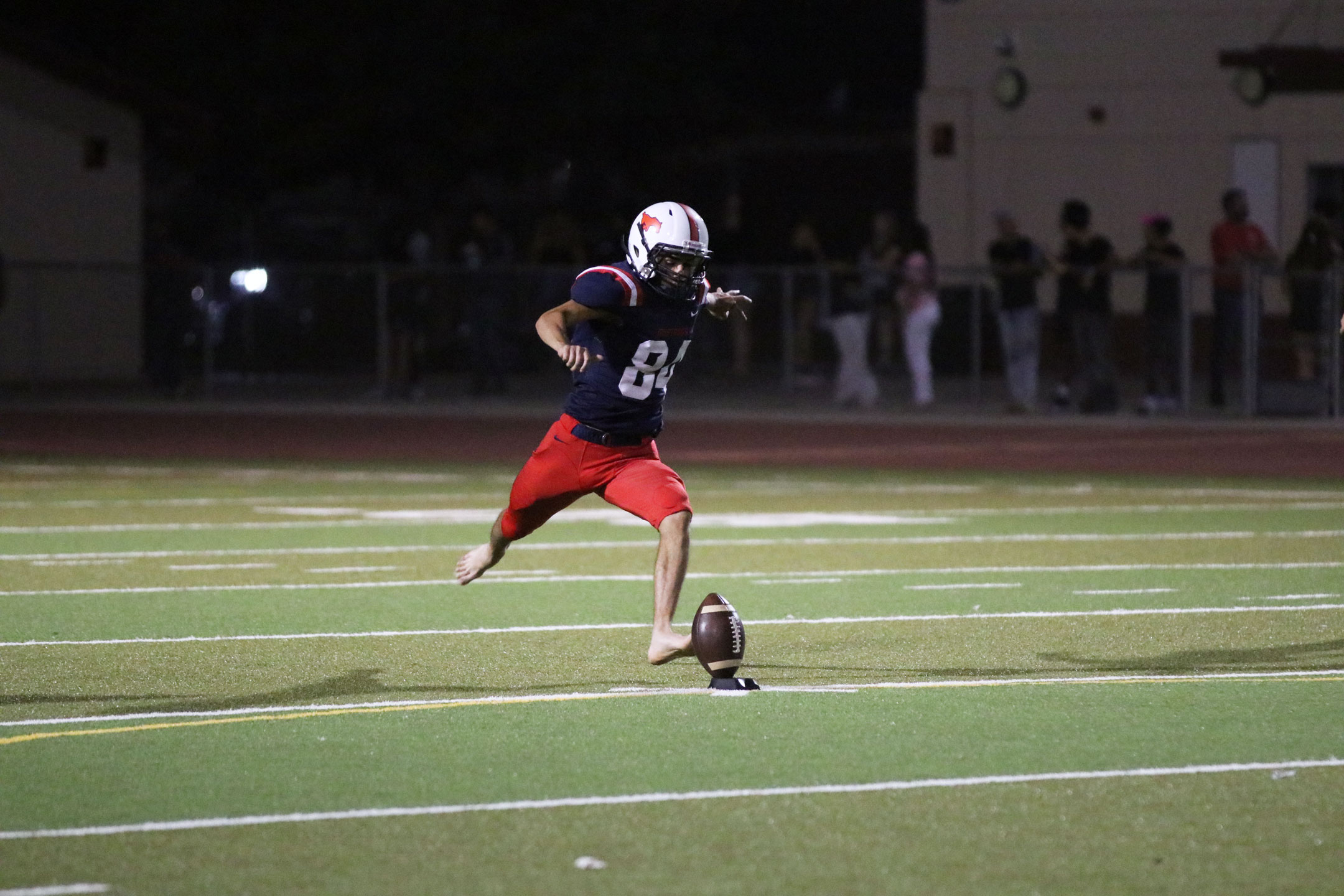 A few of the Redwood coaches questioned if kicking barefoot was allowed, but barefoot kicking has a history in football. In the 80s, it was common for NFL kickers to kick barefoot for two reasons: some kickers believed they had better ball control with a bare foot, and others had trouble hitting the “sweet spot” with their team-issued cleats.

Barefoot kicking fell out of practice as football became a big money sport, which created a market for specialized cleats for different positions, including kickers. Rodriguez seems to have re-discovered the practice of barefoot kicking and it was all thanks to the Central Valley heat. 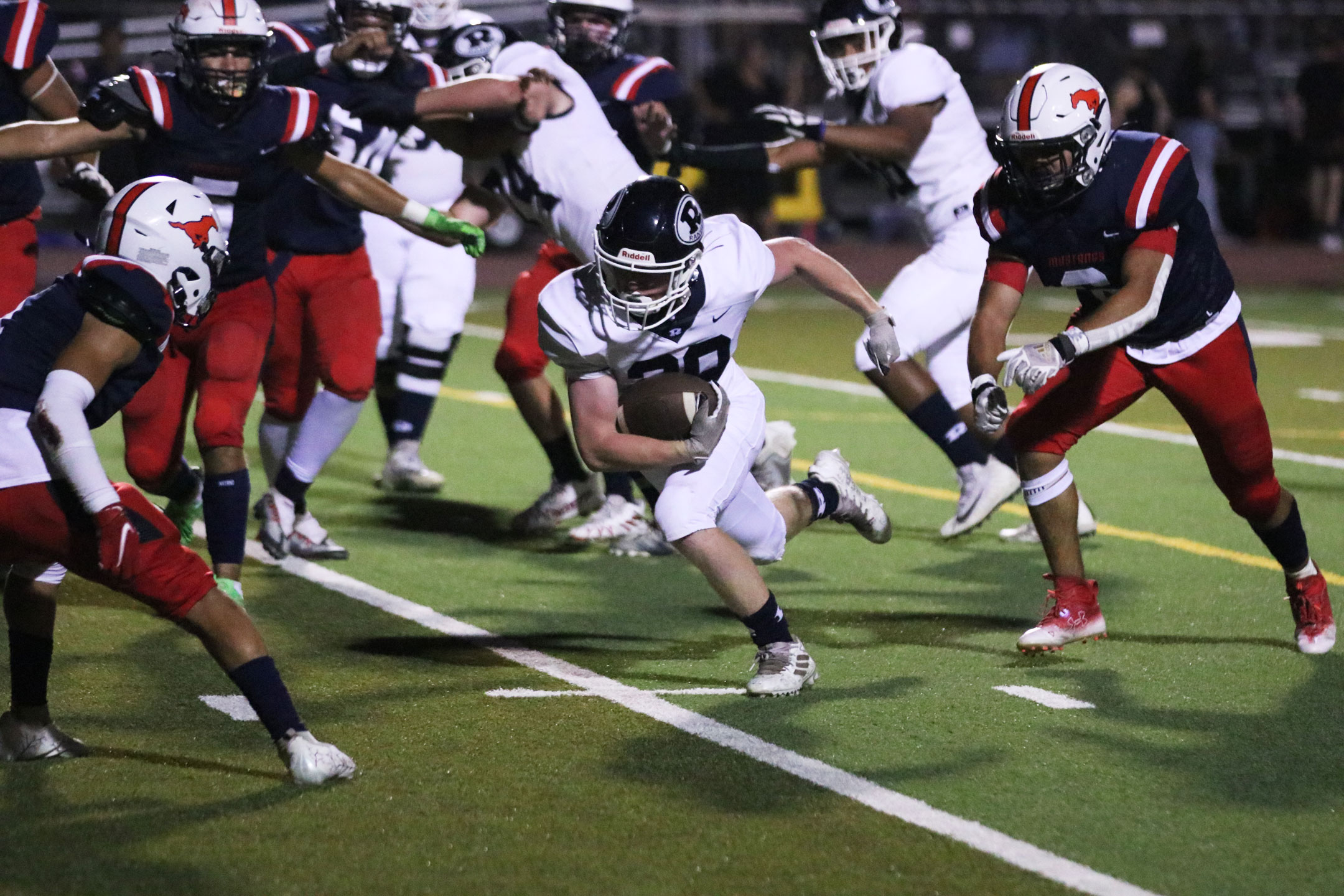 Bare foot kicking didn't help the Mustangs enough, as the rangers had a better hold on the game. Photo by Claire Livingston

The Rangers came out strong with two touchdowns in the first quarter. By halftime, they were up 20-0. Every time Tulare Western had the ball, the Rangers forced a stop. The game looked like it would be a shutout until the Mustangs finally managed to score a touchdown in the fourth quarter.

“Our guys played very well offensively, defensively and on special teams,” Redwood head coach Kevin Scharton. “It feels great to get two in a row like that.”

Redwood had a few standout players, including running back Alex Perch, who scored the first and second touchdowns for the Rangers. Wide receiver Moses Burk made a leaping catch for the third touchdown. Running back Jacob Florez scored the final touchdown with a 21-yard run. Of course, none of the offense’s accomplishments would be possible without quarterback Francisco Alvarez, who read the opposing defense and made several split second calls. 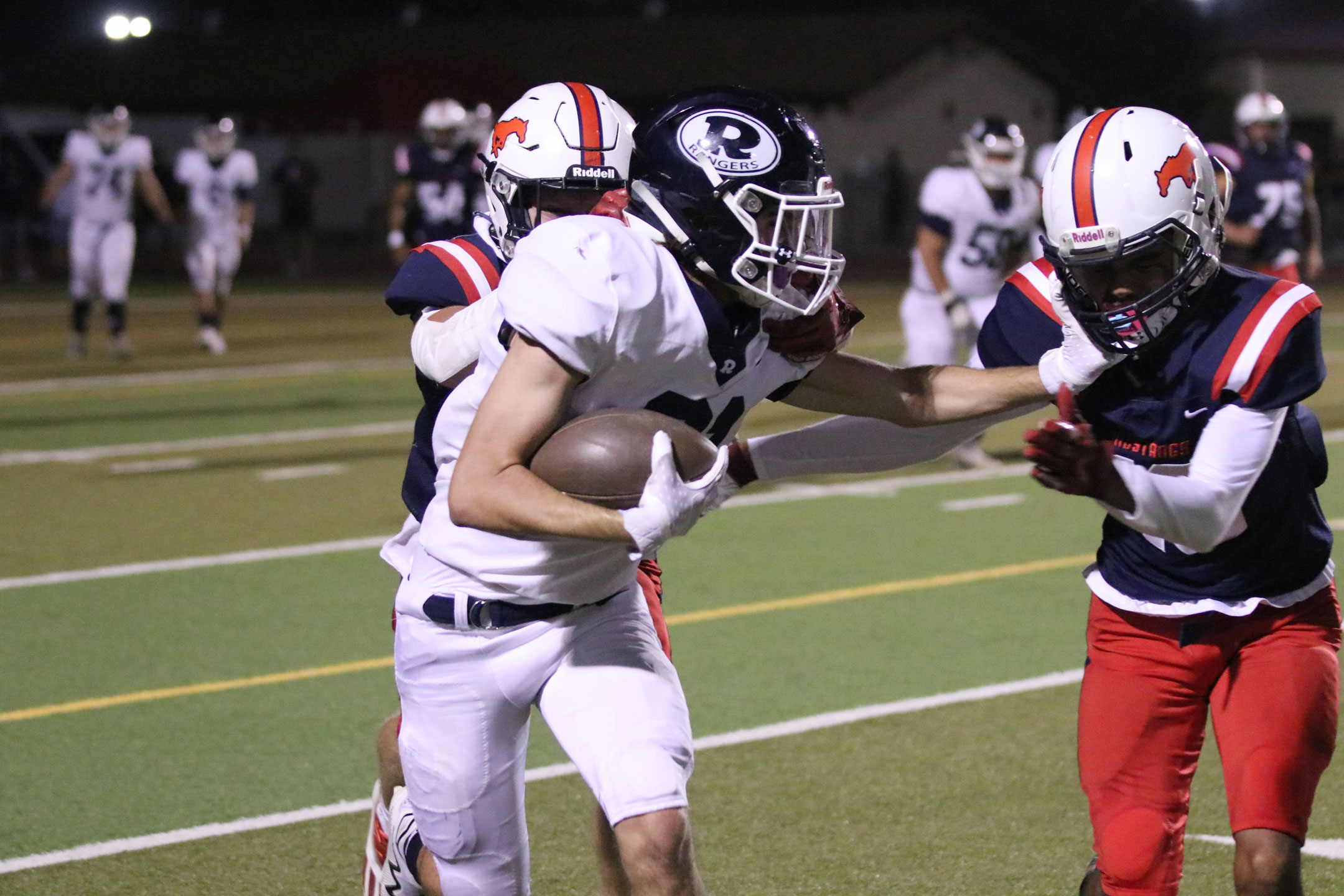 Ranger grabs the helmet of Mustang player as he attempts a stop. Photo by Claire Livingston

Tulare Western put their best on the field. Jacob Ball and Carson Lopes played both ways the entire game. Ball, listed as a wide receiver, even filled in as a punter a few times. Despite their best efforts to get past Redwood’s defense, Ball and Lopes hit a wall at every turn. After playing nearly every down the whole game, Ball was rewarded with a touchdown in the fourth quarter.

“Sometimes [Ball and Lopes] are gassed and they’re not playing to their ability but that’s what we asked them to do,” Rosa said. “They shut their mouths and put their heads down and worked.”

The Mustangs have a bye week next week. According to Rosa, they will head back to the drawing board.

“Two things: we can’t be a good football team and not run the ball and we also can’t stop the run right now,” Rosa said.

The Mustangs will have a cooler week next week to rest and work on their fundamentals before a tough game against Bakersfield Christian at home on Sept. 23. 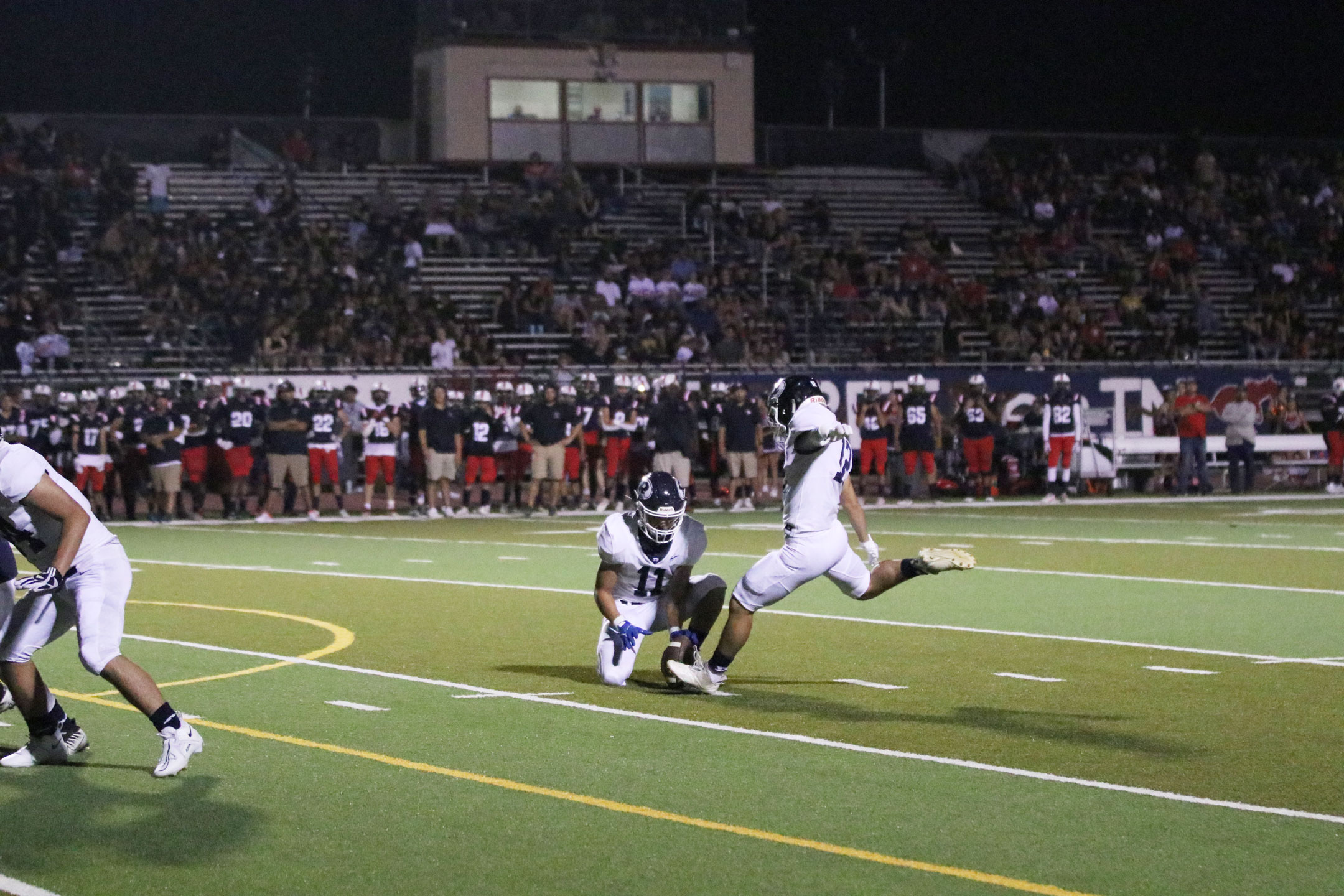 On the other hand, the Rangers are anxiously preparing to play Hanford next week despite how well they played during their last two games. After the game, Scharton said he couldn’t help thinking about Hanford.

“We have to do better on first and second down,” Scharton said. “We made some third down plays that got us out of some trouble but we need to clean that up a little bit.”

Hanford is so far undefeated in league play and will be at home when the Rangers visit on Sept. 16. 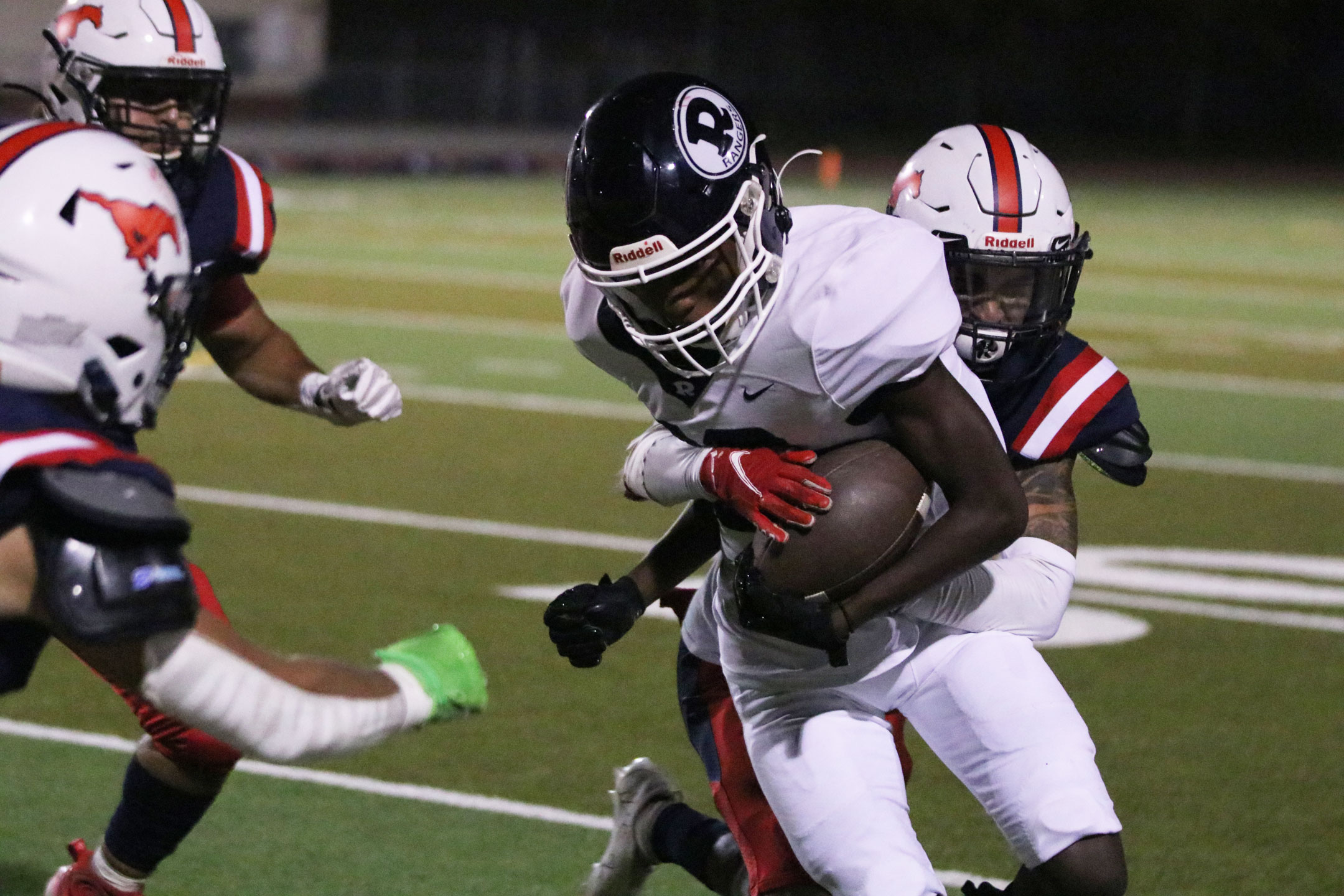