VOLLEYBALL: Aztecs sweep Spartans for twelfth win of the season

STRATHMORE – Coming off a tournament loss over the weekend, the Farmersville Aztecs proved they’re still winners in a sweep over the Strathmore Spartans. The Aztecs hit powerful kills, forcing the Spartans to scramble for balls, but what the Spartans lacked in consistency, they made up for in spirit.

The Aztecs are an experienced team who only have one loss this season. The Spartans on the other hand have only one win to their name. After the Aztecs were rattled by the officials giving their setter, Jolina Castaneda, a yellow card in the third set, the Spartans attempted a comeback, leading in points for most of the set. However, the Aztecs found their stride again and clinched the victory. 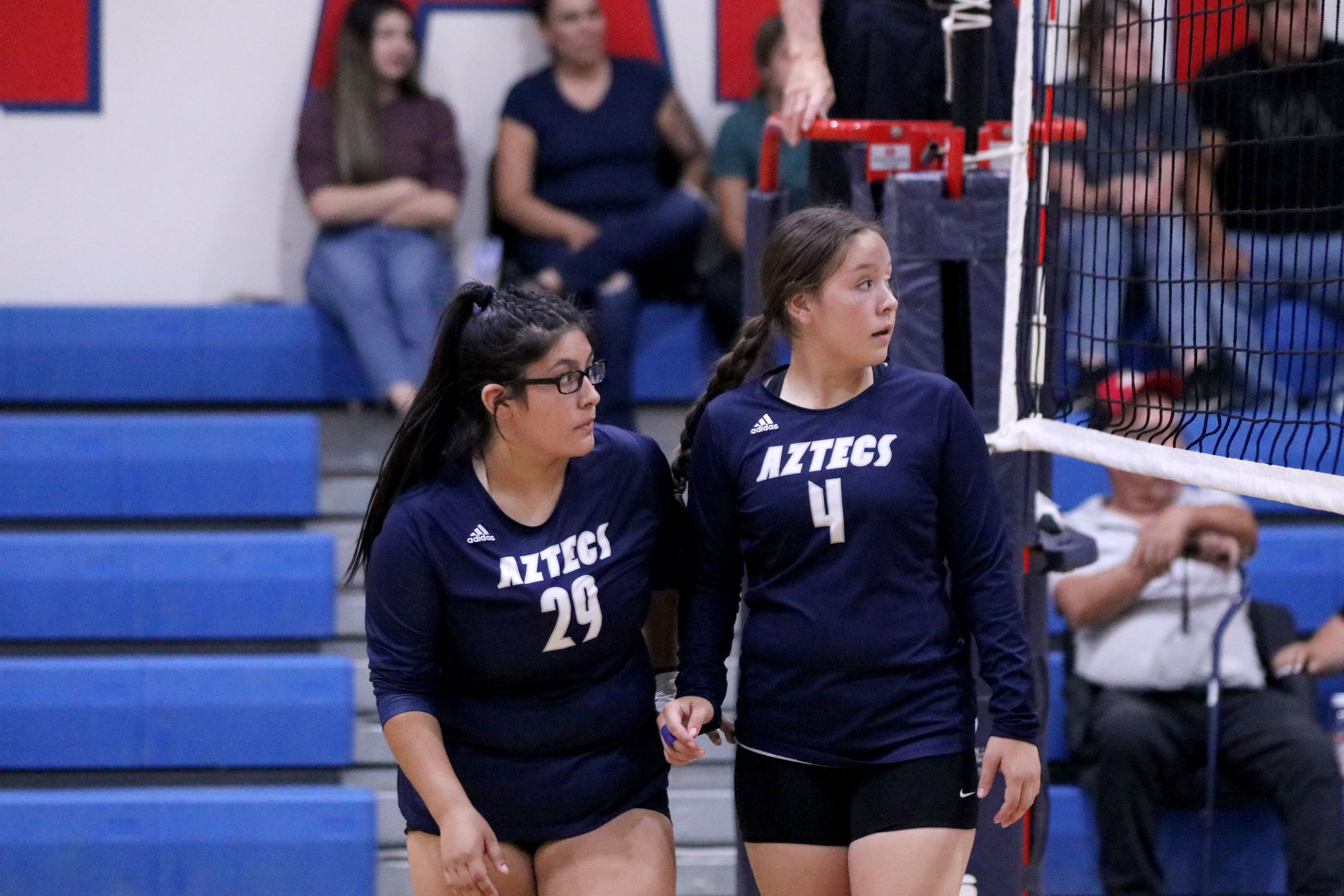 Jolina Castaneda and Janessa Garza wait to enter the game against the Starthmore Spartans in Strathmore on Tuesday, Sept. 13. Photo by Claire Livingston

“We have a tendency to get caught up in the calls the refs are making,” Farmersville head coach David Light said, “and we go through a little bit of a downturn, but I’m very happy with the way they played.”

The yellow card came early in the third set after a ball was called out by the line judge. Castaneda loudly insisted to the official that the ball was in, which resulted in the official presenting her with a yellow card. Yellow cards are uncommon in volleyball, but generally seem more dramatic than they actually are. It is simply a warning from the official that is noted on the scorecard and the offender will be under slightly more scrutiny for the rest of the match.

“She didn’t curse or anything like that,” Light said. “He just wanted to stop the outburst from continuing further.”

Light said Castaneda is a talented and spirited player. As the setter, she directed the ball to the hitters, allowing them to make those powerful kills that the Spartans struggled to get under. Most notably, freshman Jazmaine Stewart, who plays both outside hitter and opposite hitter, was a force to be reckoned with throughout the game. She was responsible for several points throughout the sweep.

Despite trailing in the first set and losing 25-16, the Spartans didn’t let that get in the way of their spirit. Senior Clarissa Ceballos rallied her team between every point, encouraging them to go for balls and diving for several of them herself. At one point, she nearly somersaulted into the scoring table going for a loose ball. The team’s spirit buoyed them where experience didn’t and the second and third sets were much closer than the first. 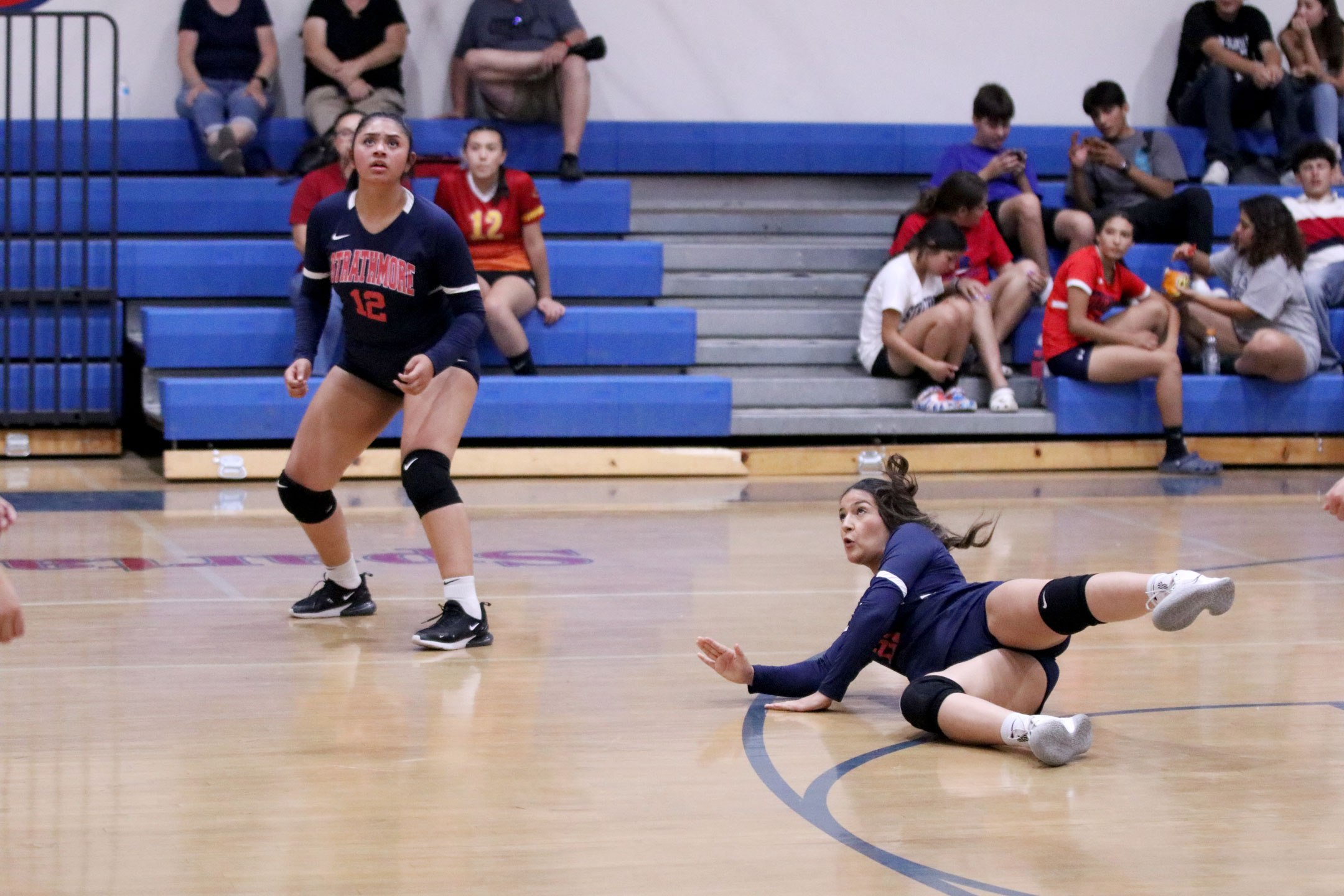 A Strathmore Spartan dives for a stray ball during a losing effort against the Farmersville Aztecs. Photo by Claire Livingston

“That spirit, that camaraderie has allowed them to become more than teammates,” Strathmore head coach Fidelina Camacho said.

The Spartans are a younger, less experienced team than the Aztecs, but the younger teams learn by playing the more experienced teams, at least, that’s what Camacho hopes her team will take away from non-league play. Strathmore will have a final non-league game at home against Woodlake on Sept. 15 before league play begins.

“I feel really strongly that we’re going to have a really good finish to the season,” Light said. “We just have to stay healthy and keep our focus.”

Farmersville begins league play against Lindsay at home on Sept. 15.