EXETER – Between Exeter’s week of blocking practice and the winning combination of setter Avery Barber and hitter Hannah Barker, the Exeter Monarchs were able to sweep the Justin Garza Guardians in a little over an hour.

Unfortunately for the Guardians, they were missing a few of their starters when they came to town to face the Monarchs. With Exeter on a winning streak, there was little chance of overthrowing the monarchy. The Exeter blockers were a wall the Guardians simply could not get past, forcing the Guardians to scramble for balls unexpectedly sent right back to them.

“Justin Garza was missing key players tonight so I didn’t know what to expect from them,” Exeter head coach Samantha Hilvers said. “I thought we handled the unknowns really well and they did a really good job of making us earn our points.” 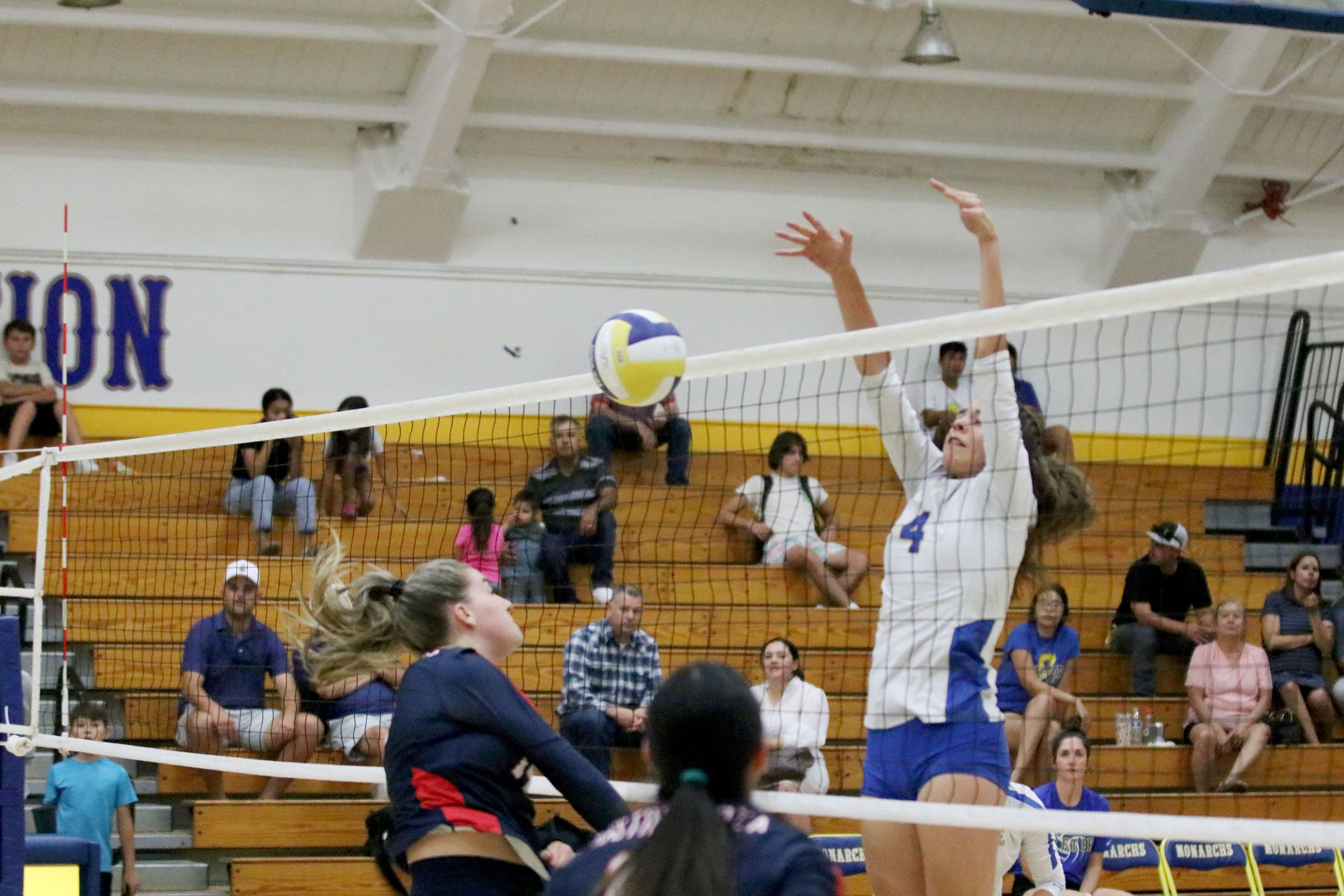 Though all the Monarchs made excellent plays including aces, kills and digs, two of them stand out: junior Avery Barber and senior Hannah Baker. According to Hilvers, Baker was the only returning player on varsity at the start of last season and Barber had only started playing as a setter in the eighth grade. Since Barber missed her freshman season due to Covid, she began setting on varsity only last year as the team came together under leadership from Baker.

“[Baker and Barber] just melded,” Hilvers said. “The team was just kind of following suit behind the two of them.” 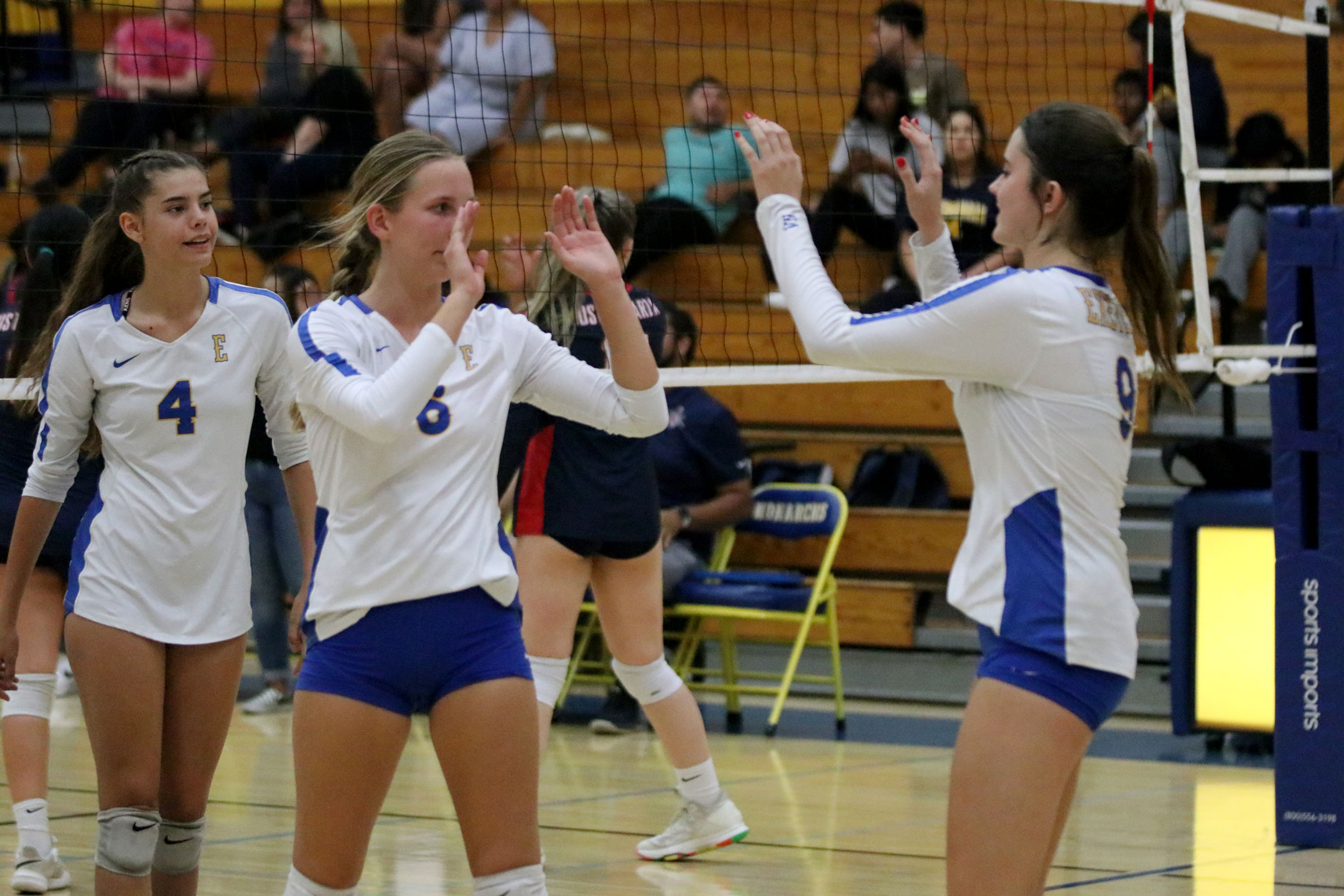 A setter essentially directs the offense, deciding which hitter to send the ball to for a kill. When Barber sets it up and Baker goes up after it, there’s a good chance that the ball is going to hit the floor on the other side of the net. They are a consistent combination that the Monarchs get behind. They carry that energy throughout all their play and it was especially evident in their blocks against the Guardians. 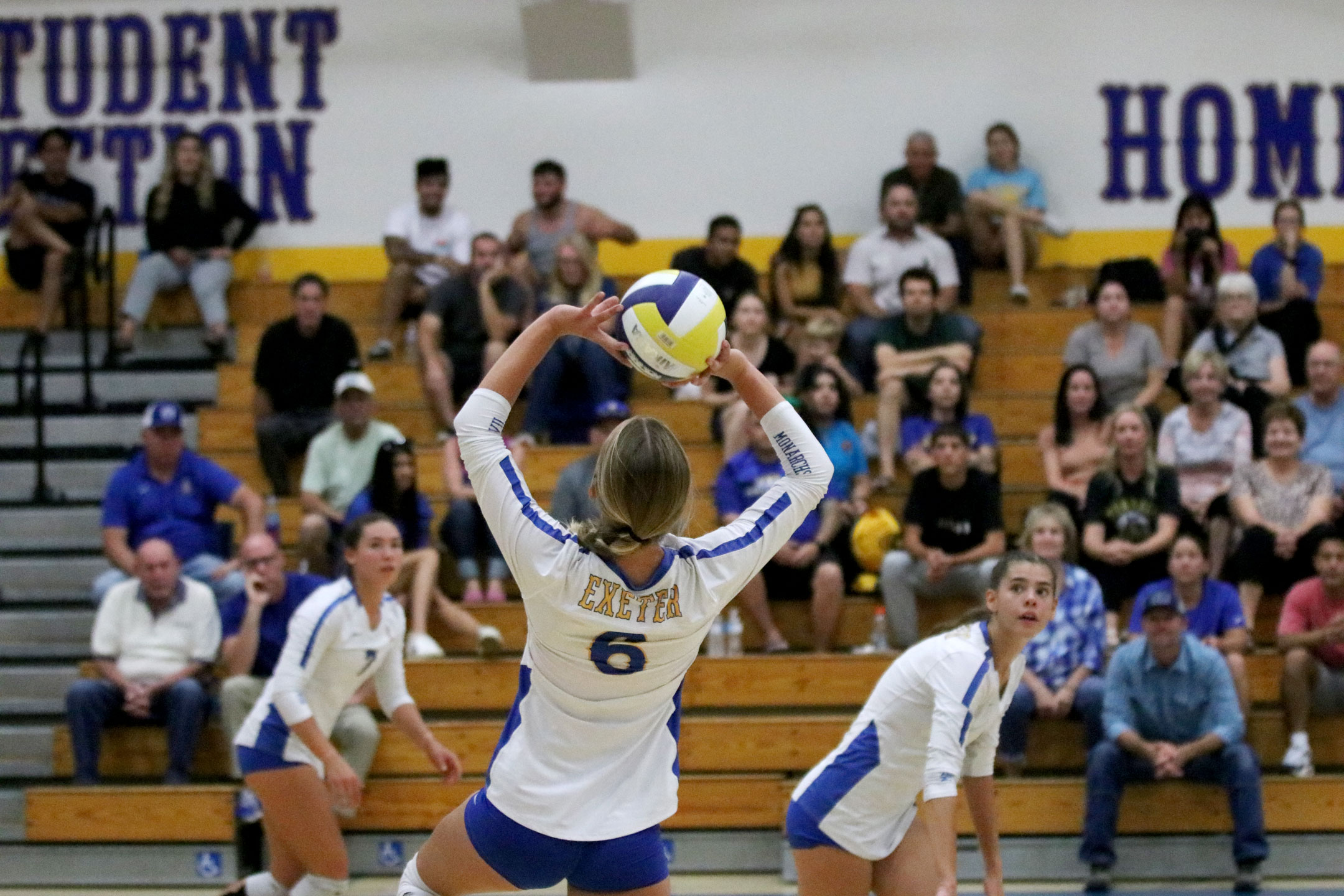 The Monarchs worked on blocking this week after Hilvers saw them playing against Centennial in Bakersfield on Sept. 8. She recounted turning to her assistant coach and commenting that the team needed to work on blocking in a big way. They ran drills all week and it showed at the game against Garza. The Exeter blockers left the Guardians scrambling to reset several times throughout the game.

“I think they gave it their all,” Justin Garza head coach Kyle Pittman said of his team playing without some of their starters. “Which is all I could really ask of them.” 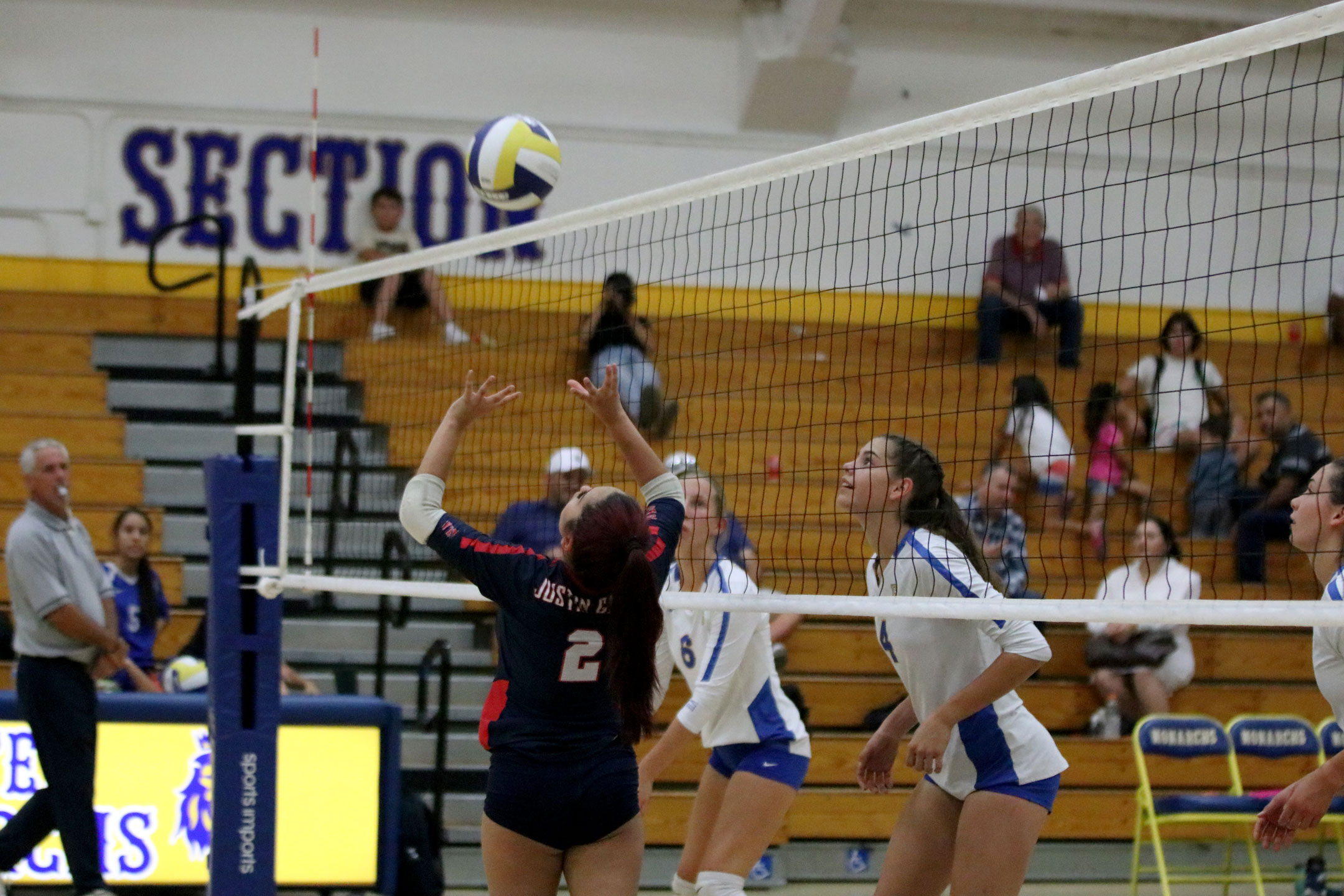 Justin Garza's setter, who is usually the teams libero, was able to hustle to every ball and give it her all Photo by Claire Livingston

The Guardians setter stood out because she made several plays, running around the court to catch loose balls and diving for balls that the Monarchs blocked. Several of her saves seemed impossible, but she managed to get under many of Exeter’s kills.

“Our setter tonight is normally our libero,” Pittman explained. “So that explains the running all around the court.”

The Guardians put up a solid effort despite missing several players. Only eight members of their roster were able to make the game, but they had the spirit of a full team, cheering for every single point they earned against the Monarchs, though Exeter did not allow many points. In the first set, Exeter served 11 times and earned 10 points before Garza scored one.

“The rest of the season looks good though,” Pittman said. “We’re excited to see what happens.”

The Guardians will face Clovis East in a tournament on Sept. 16.

“We’re just working on keeping our intensity up,” Hilvers said. “We’ve got Hanford West next and they can kind of be a crapshoot where you don’t really know what’s coming.”

The Monarchs will take a rest over the weekend before traveling to face Hanford West on Sept. 19 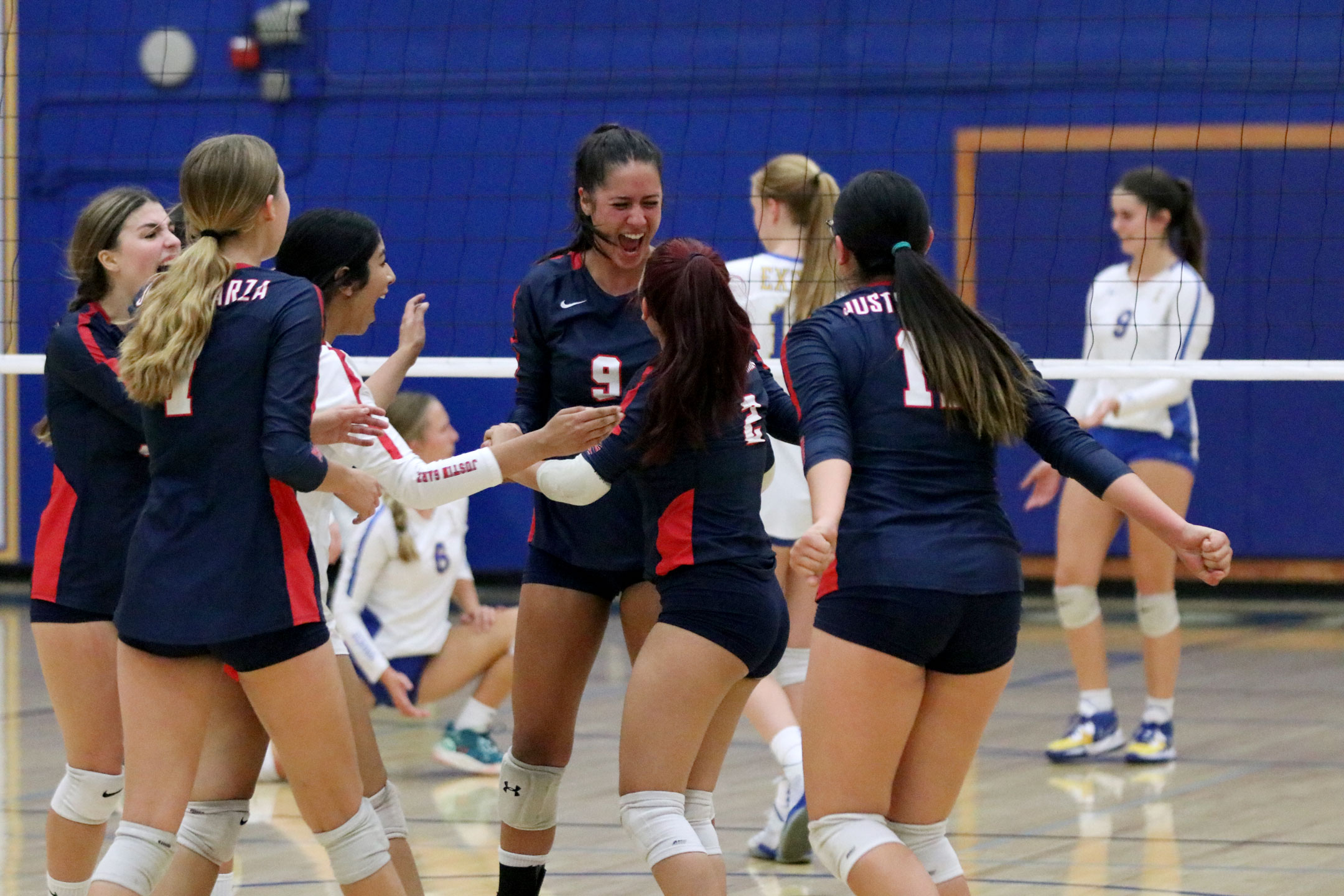