VOLLEYBALL: Spartans spike back against Cardinals

After losing the first set, the Strathmore Spartans come back for a massive win over the Lindsay Cardinals

STRATHMORE – The Strathmore Spartans served up a storm against the Lindsay Cardinals for a triumphant victory in their second league game of the season. After a loss in the first set, the Spartans rallied and came back with a vengeance for the win.

The Spartans and Cardinals went point for point in a thrilling fourth set that ended with a score of 29-27. Between clashing cheers from the home and visiting sections, the Spartans earned their victory off of a beautiful serve by their captain Clarissa Ceballos and the gym erupted with elation.

“This is the team that I’ve been seeing since the beginning of the season,” Strathmore head coach Fidelina Camacho said. “They pulled through and they showed who they are and what they’re capable of.” 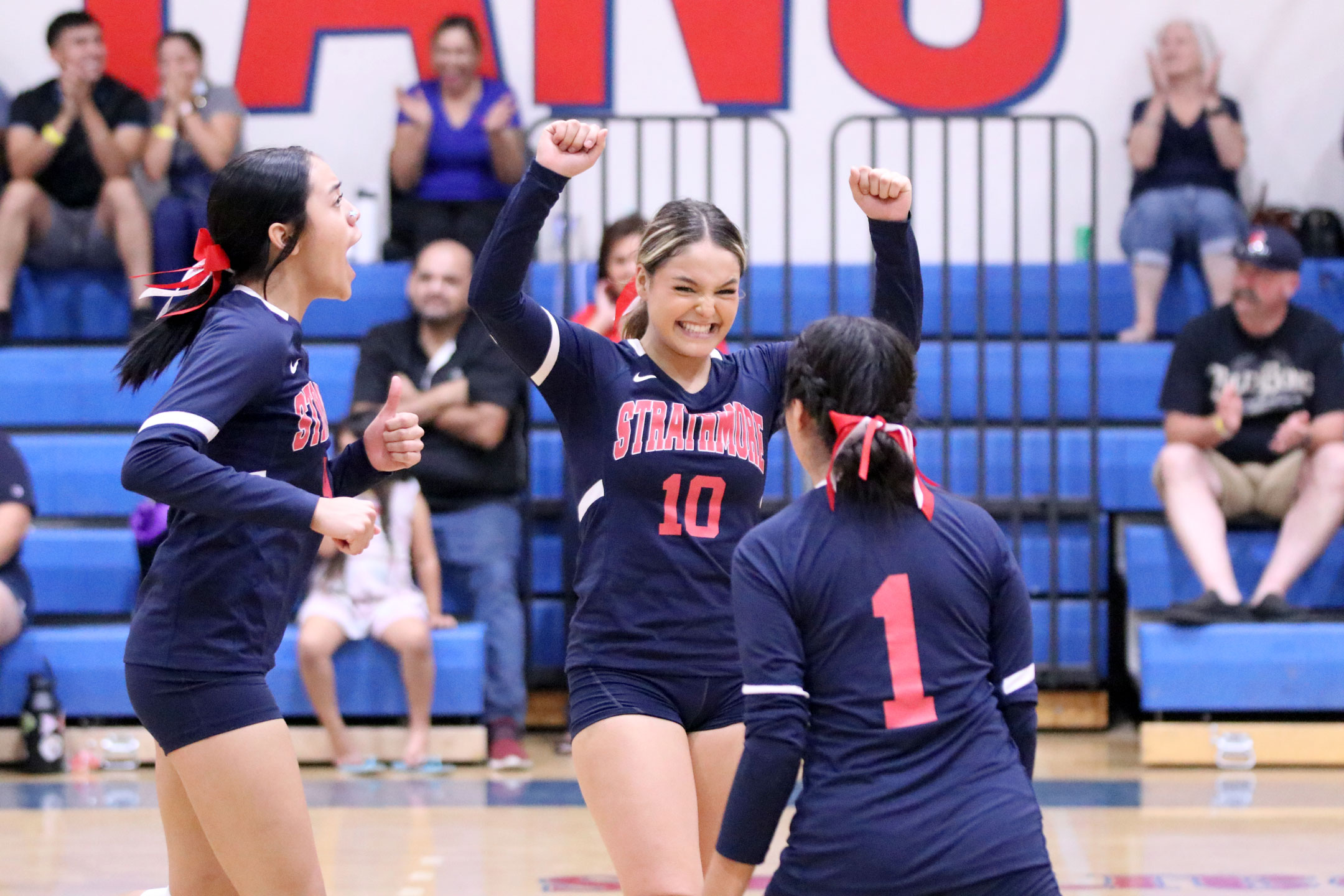 Clarissa Ceballos raises her arms in celebration after a spike lands on the Lindsay side of the net. Strathmore Spartan sophomore Alina Ibarra joins Ceballos to celebrate. Photo by Claire Livingston

The Spartans are a highly defensive team with skills in both the back and front rows. Although they had a losing record during non-league play, they have vastly improved their combinations and communication skills. Compared to the Cardinals, the Spartans were a vocal team, talking to each other constantly as they hustled to get the ball back over the net.

The Cardinals seemed to drag their feet after the first set. They lost the second and third sets 25-17 and 25-12. Although they were competitive in the fourth, they allowed the Spartans to force them into several errors, which cost them points.

“They’re a very defensive team,” Lindsay head coach Angel Leon said. “And they make other teams make mistakes and that’s what they did today. My hat’s off to them.”

Camacho has been working on rebuilding her team and getting them to the place they need to be for league play. The Spartans’ hard work showed against Lindsay. Several players made excellent plays but Ceballos stood out.

A senior, Ceballos is a fantastic all around player with excellent serves and kills as well as good digs. She’s one of the team captains and plays the entire game, calling out instructions and encouragement to her teammates. During the third set, she went on a seven-point service streak. 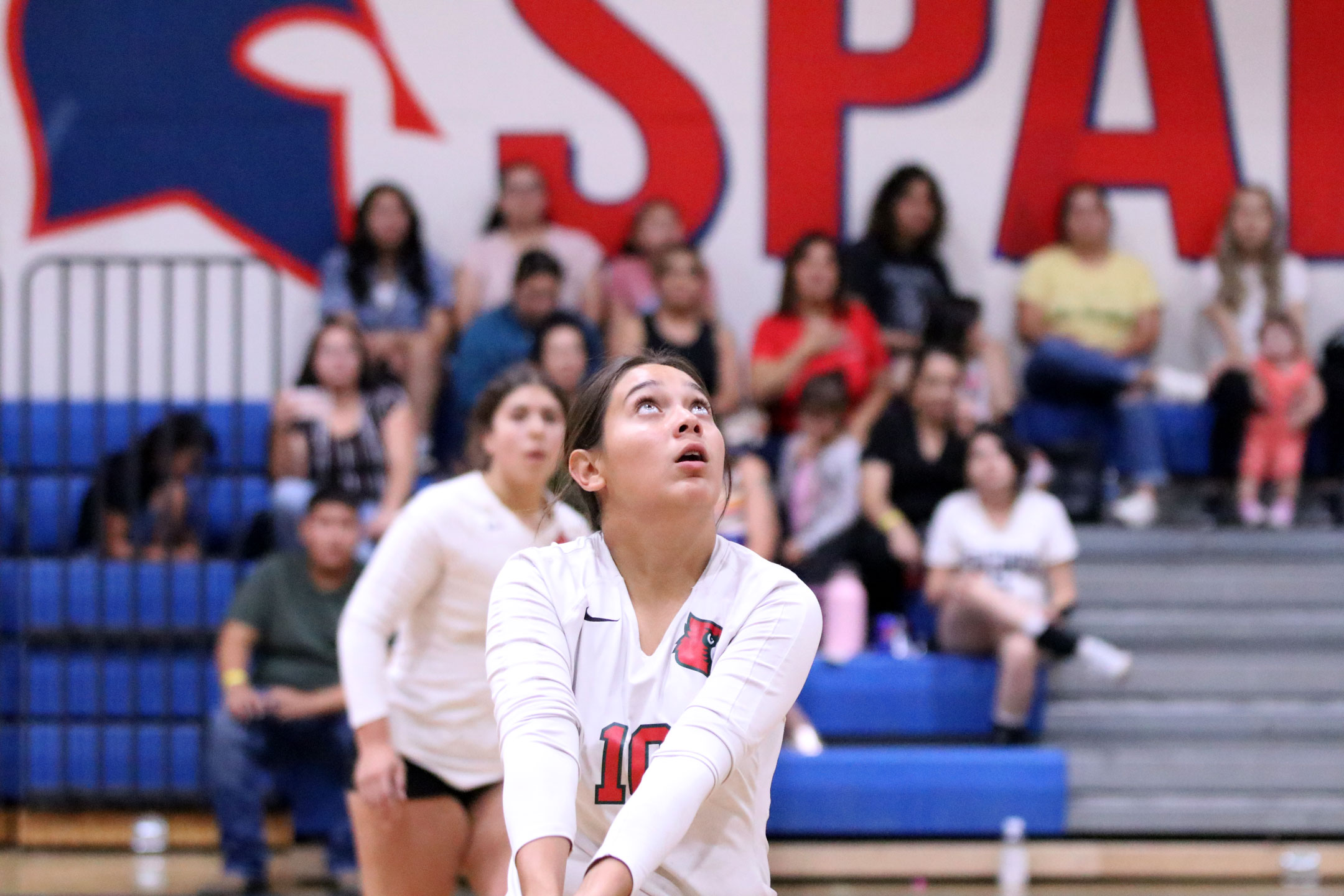 Lindsay junior, Victoria Frias eyes a ball from over the net to hit back over during a four set losing effort against Strathmore on Wednesday, Sept. 21. Photo by Claire Livingston

“She’s one of our best hitters and that complements her serving,” Camacho said. “Porterville College has already reached out to her.”

As league play comes into full swing, the Cardinals hope to find their footing again. They have the skills, but as their coach put it, everyone has off days. The Cardinals are currently ranked fifth in the East Sequoia League with a 1-2 league record.

The Cardinals will hope to be “on” again on Sept. 27 when they face Granite Hills at home.

“If my team stays playing like this, they’re gonna do great,” Camacho said in anticipation of the rest of league play.

The Spartans are tied with Woodlake for fourth in the East Sequoia League with a 1-1 record in league play. They will face Tulare Western, Granite Hills and Wonderful College Prep Academy in a tournament on Sept. 24.