FOOTBALL: Zach Zwart goes from gridiron to engineering, everything in between

VISALIA – Zach Zwart isn’t just a football player or a basketball player. He’s also a tennis player, brother, son of a dairy farmer and future mechanical engineer. On and off the football field, he’s a jack of all trades.

Besides playing on the offensive line, Zwart is the team’s long snapper and has even recorded a passing touchdown this season. Off the field, he spends time taking leadership classes, studying, working on his father’s farm and playing tennis.

“My dad was the coach for the team [at CVC] and my brother played,” Zwart said. “We’ve always been a big football family.” 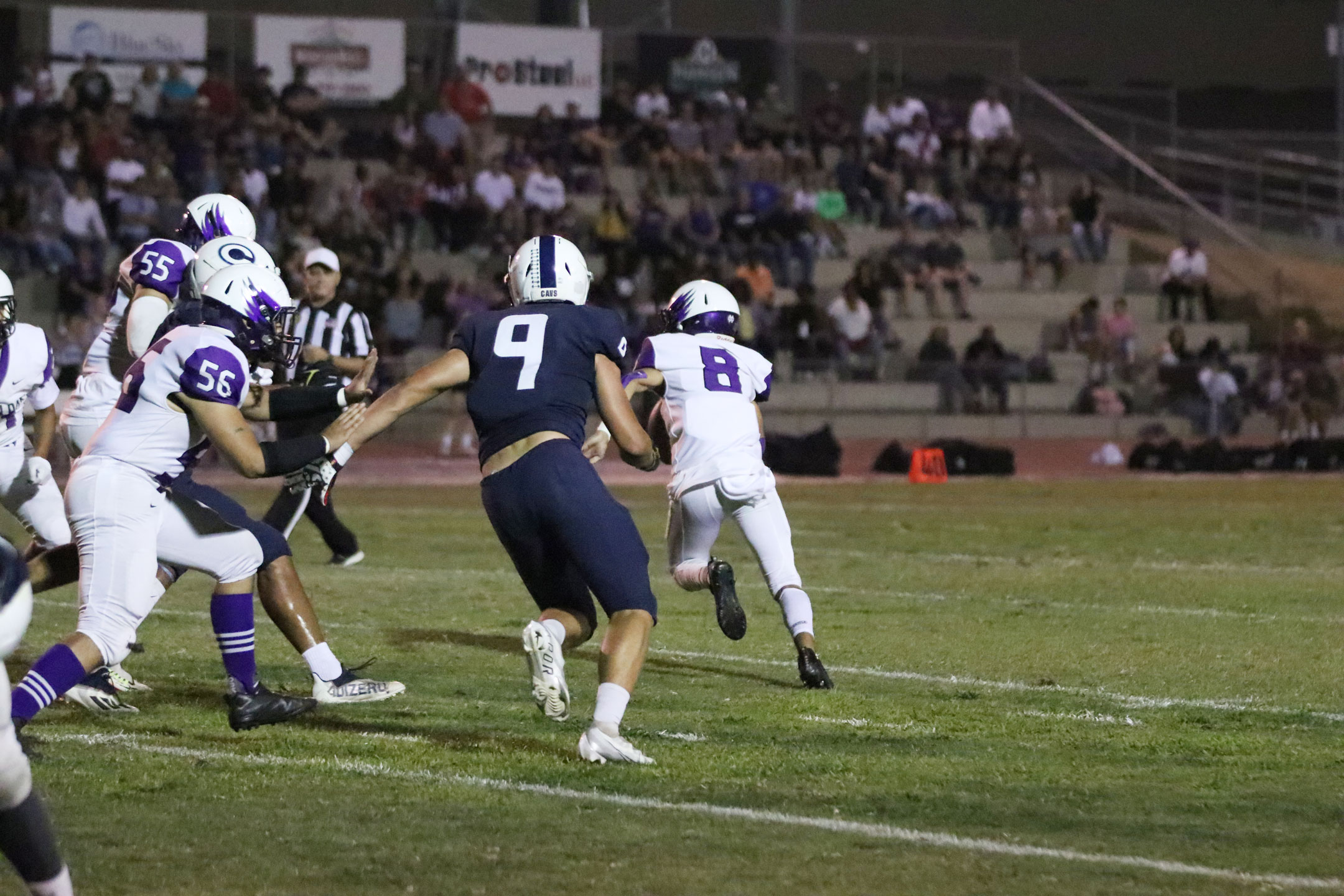 Zach Zwalt chases down a Mission Oak running back during a home game on Friday, Sept. 16. CVC pounded the features out of the hawks 42-7. Photo By Claire Livingston

Even on a team full of players over six feet tall, Zwart stood out immediately at Central Valley Christian football practice. He’s 6’3 and 220 pounds. His dad hopes he’ll grow two more inches in college. With his left wrist wrapped and purple gloves, Zwart practiced blocking with his teammate, Oregon-commit Jaeden Moore. The two boys are similar in size, but play on opposite sides of the ball. Moore plays defensive end and Zwart plays tight end.

“He’s Jaeden’s twin on the other side of the ball,” CVC head coach Mason Hughes said. “He can do everything: throw a football, kick a football, snap a football and catch a football.”

Zwart is the youngest of four children and all of them were athletes at CVC. Zach also plays for the basketball team and has recently started playing tennis. He said tennis helps him with his hand-eye coordination and quickness in his feet, which translates to faster routes in football and playing defense in basketball. It also keeps him active in the off season. 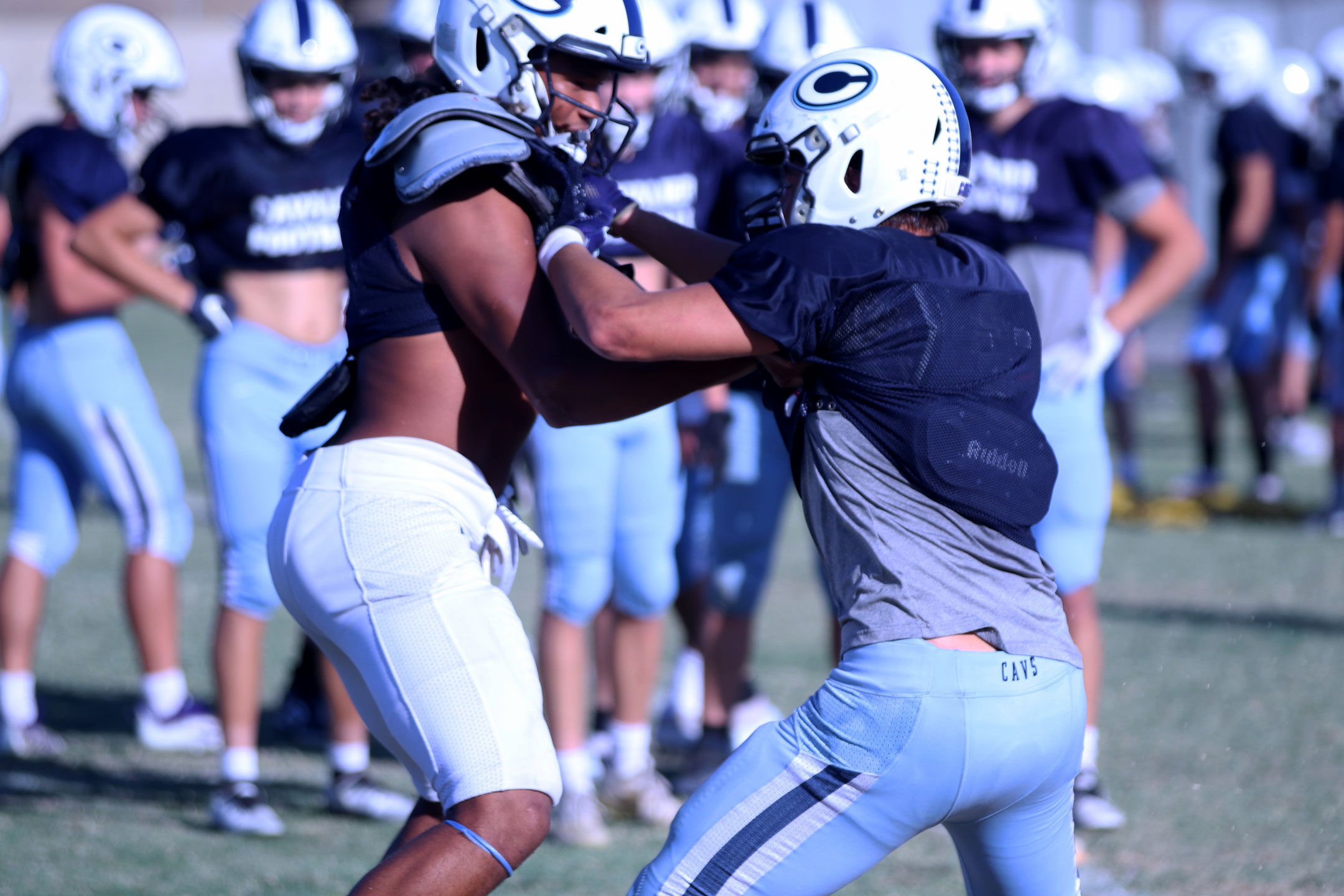 Zach and Jaeden Moore lock in arms during a blocking drill at CVC practice. Photo by Claire Livingston

Zwart’s affinity for football comes from his youth. His dad, Neil Zwart, said that he grew up with a football in his hands. His older sister played travel soccer and Zwart would ask his dad to play catch with him during halftime. His catches as a kid were so impressive, other parents would come up asking where he was planning to play in high school. Zwart, however, was always committed to Central Valley Christian.

It wasn’t just the football program that drew Zwart to CVC. The academic rigor is important to him as well. Zwart is an excellent student and although he plans to play football in college, he’s also going to study mechanical engineering.

“My work ethic with school keeps me responsible at home,” Zwart said. “There isn’t much time for other things besides school and football so I stay out of trouble. It’s also good practice for what I’ll be doing in college with engineering.”

In the offseason, Hughes offers a leadership class during lunch, which many of his players take. It isn’t an official class, they volunteer their time to go. It runs from February to April and they learn what a leader is and how to be a good leader. After taking the class, Zwart was selected as one of the football team captains.

“A lot of underclassmen take the class too,” Hughes said. “So when they’re voting for captains, they know what they should be looking for. It’s not a popularity contest.”

Zwart isn’t just a leader through speaking to his teammates, he’s a leader by example. His work ethic is strong on and off the field. He’s devoted to his team and his studies, which demonstrates to his teammates how hard they should expect to work to be successful student-athletes.

So far this season Zwart has recorded four receiving touchdowns–as many as he had the entirety of his junior season–and one passing touchdown. According to Hughes, Zwart “[throws passes] all the time.” He’ll reverse and throw the ball and it always finds its target. He has an uncanny sense of the football field, where all the players are and where the ball needs to go.

“He could play in college just for that,” Hughes said.

But Zwart wants to play college football as a tight end. A tight end is essentially a hybrid between a receiver and an offensive lineman. He can block for the quarterback and running backs or he can run into the field to catch passes. Zwart has visited several schools and is in talks with some coaches, but hasn’t made a final decision about where he’s going next year. Wherever it is, it’ll have to have a good mechanical engineering program.

Zwart’s career goals don’t include the NFL, but if he had to pick a team to play for?

“The Bills. That’s my favorite team.”