PORTERVILLE – The El Diamante Miners were missing their head coach, but they were already in the lead before the Monache Marauders’ goalie was issued a minor misconduct penalty and sent to the bench. After the penalty, the Miners couldn’t stop scoring.

The El Diamante Miners were without their head coach as they traveled to face the Monache Marauders at home, but that didn’t hinder them in the slightest. Despite allowing the Marauders to lead 3-1 in the first quarter, the Miners ran away with the score and ended up with a 19-9 win. The score ran away in the Miners’ favor after the Marauders’ goalie was removed from the game for a penalty.

“Overall it was rough but we still got the job done,” El Diamante captain Rylan Montgomery said. “I just felt like we had to step up a little bit as seniors to lead the team.” 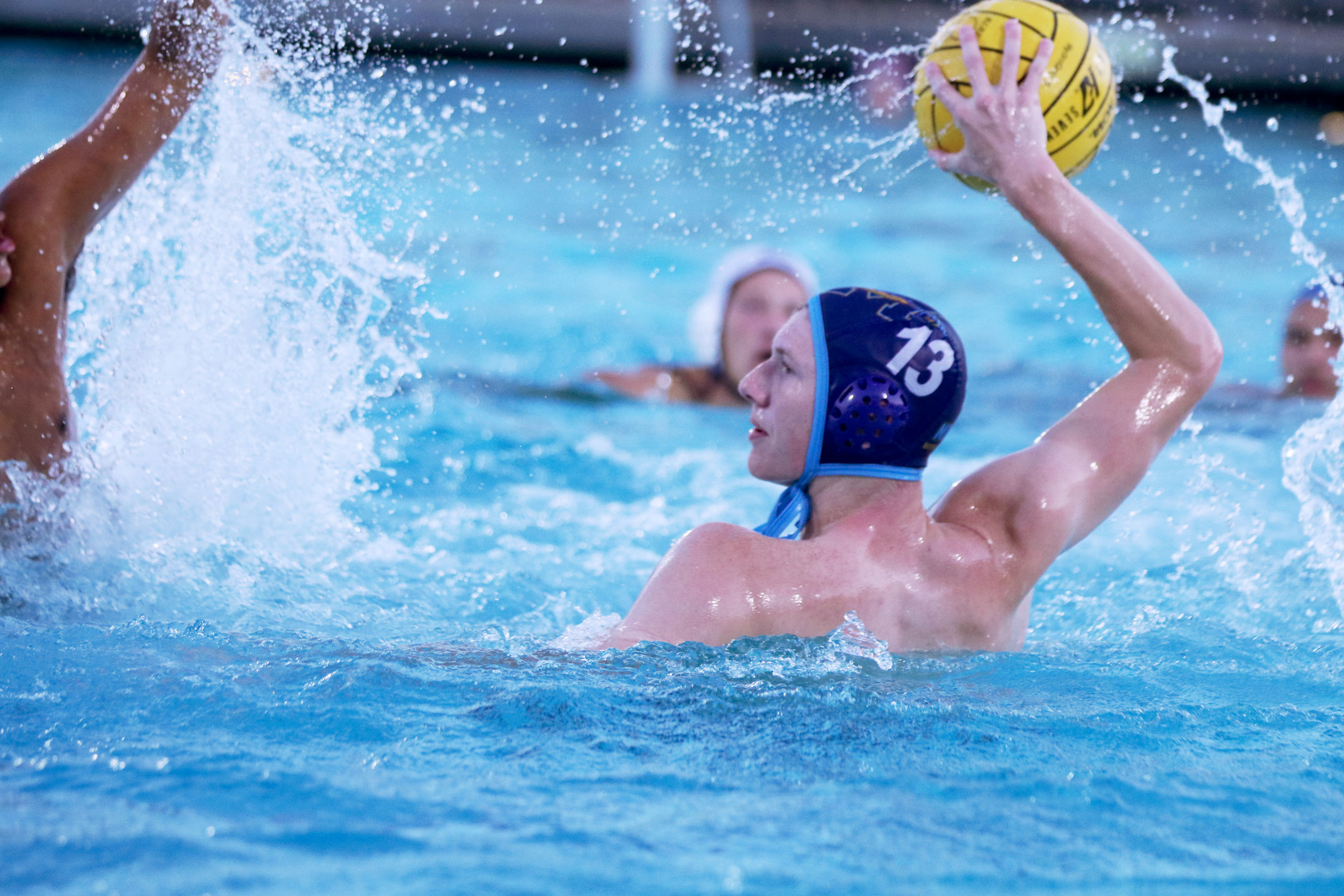 Monache's Carson Kaiser rears back to pass over an El Diamante defender on Thursday, Sept. 29. Photo by Claire Livingston

Montgomery was the top scorer for the Miners with seven goals followed closely by senior Jaxon Deboef with five goals. Until the third quarter, the score was fairly close, but the Monache goalie Wyatt Daniels unfortunately had to leave the game early in the third quarter after he was issued a minor misconduct penalty for a perceived swing at an El Diamante player when going for the ball.

Daniels was out for the rest of the game and senior Hayden McLemore came in to take his place. McLemore played nearly an entire half in the goal against the top team in the East Yosemite League and held his own fairly well. To support McLemore, the Marauders made sure to hustle back to play defense against the formidable Miners’ offense.

“Actually, he did better than we all anticipated,” Monache head coach Paul Suhovy said. “For a kid who never played goalie in his life.”

While the loss of Daniels was unfortunate for the Marauders, it was very fortunate for the Miners, who were able to run up the score despite a few more fouls. Towards the end of the third quarter, Monache’s Jared Ojeda and El Diamante’s Holden Benevento received penalties that sent them to their respective benches. In the fourth period, Jaxon Deboef, one of El Diamante’s top scorers was sent to the bench as well having received three fouls over the course of the game.

“It just gets heated and it’s on both sides,” El Diamante’s JV head coach Spencer Minnick said. “They did a much better job of not talking and they really kept their cool under pressure.” 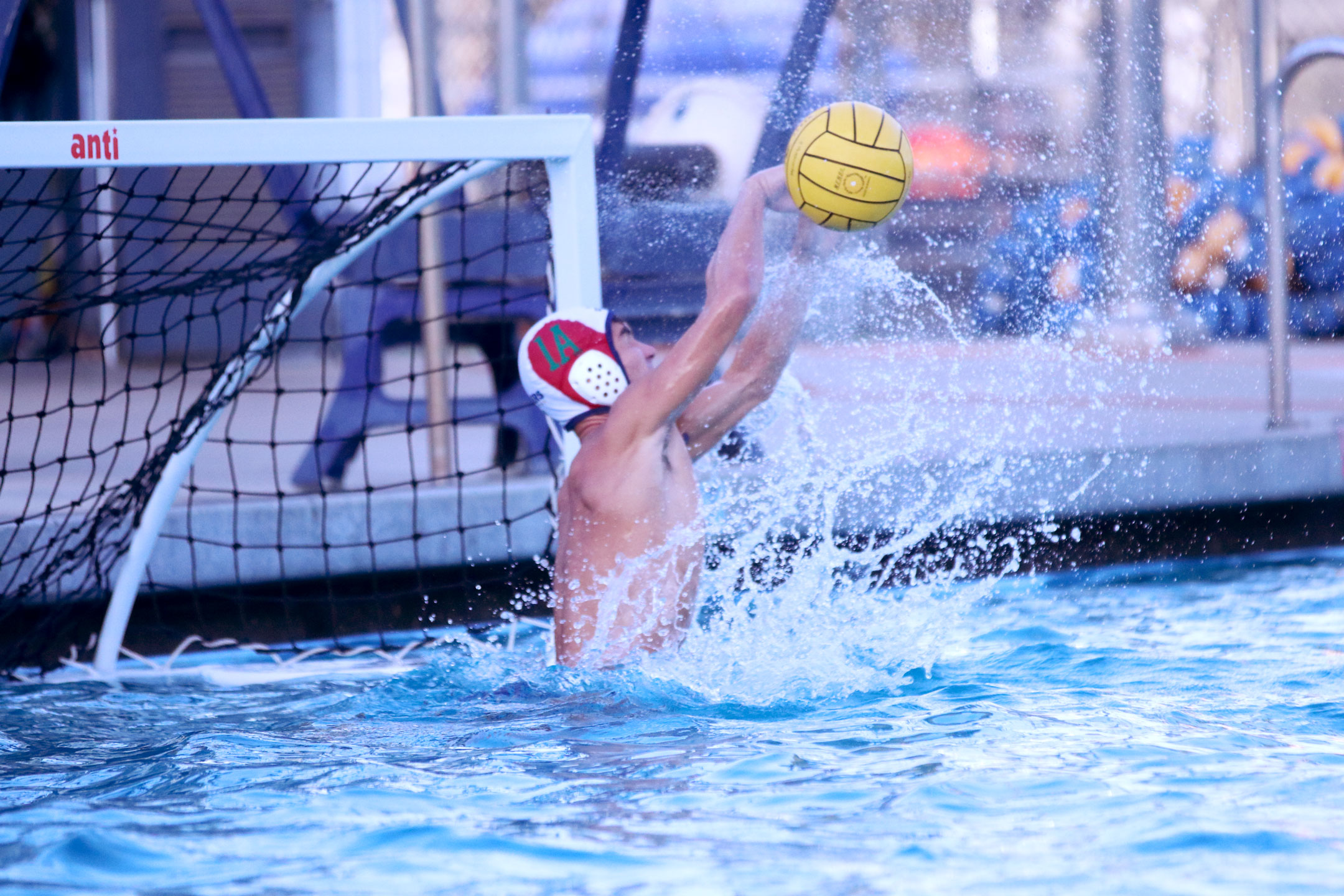 El Diamante Jordan Sanchez leaps out of the water to defend the Miners' goal during a 19-9 victory of the Monache Marauders. Photo by Claire Livingston

Minnick coached several of the varsity players when they were on the JV team and stepped up to coach the varsity game after the JV game when the varsity coach, David Mitchell, had a personal emergency. It’s a testament to Mitchell’s coaching that his team can play without him and still win by ten goals.

The Miners have a full roster and every single player on the team is an excellent water polo player. El Diamante is now 3-0 in league play and number one in the EYL. They will travel to Mt. Whitney on Oct. 4.

“Our guys just made small mistakes,” Suhovy said of his team’s performance. “And [El Diamante] countered on it.”

The Marauders are 1-1 in league play after a win over Golden West on Sept. 27. They were 13-4 in non-league play so they aren’t out of the running for a league championship yet. Currently tied for third in the EYL, the Marauders will travel to face Redwood on Oct. 4.