TULARE – The Mission Oak Hawks sent the Tulare Western Mustangs packing after a 43-7 win in their first game in the West Yosemite League.

The Mission Oak Hawks soared in their first league game against the Tulare Western Mustangs. Junior Jacob Ramirez found his wings and scored three touchdowns. Although junior Kenny Jackson had the most rushing yards, Ramirez had several big runs throughout the game to put the Hawks in the best position to score.

“It was just his night tonight,” Mission Oak head coach Marty Martin said. “The way they ran their coverage tonight it was just hitting for him.” 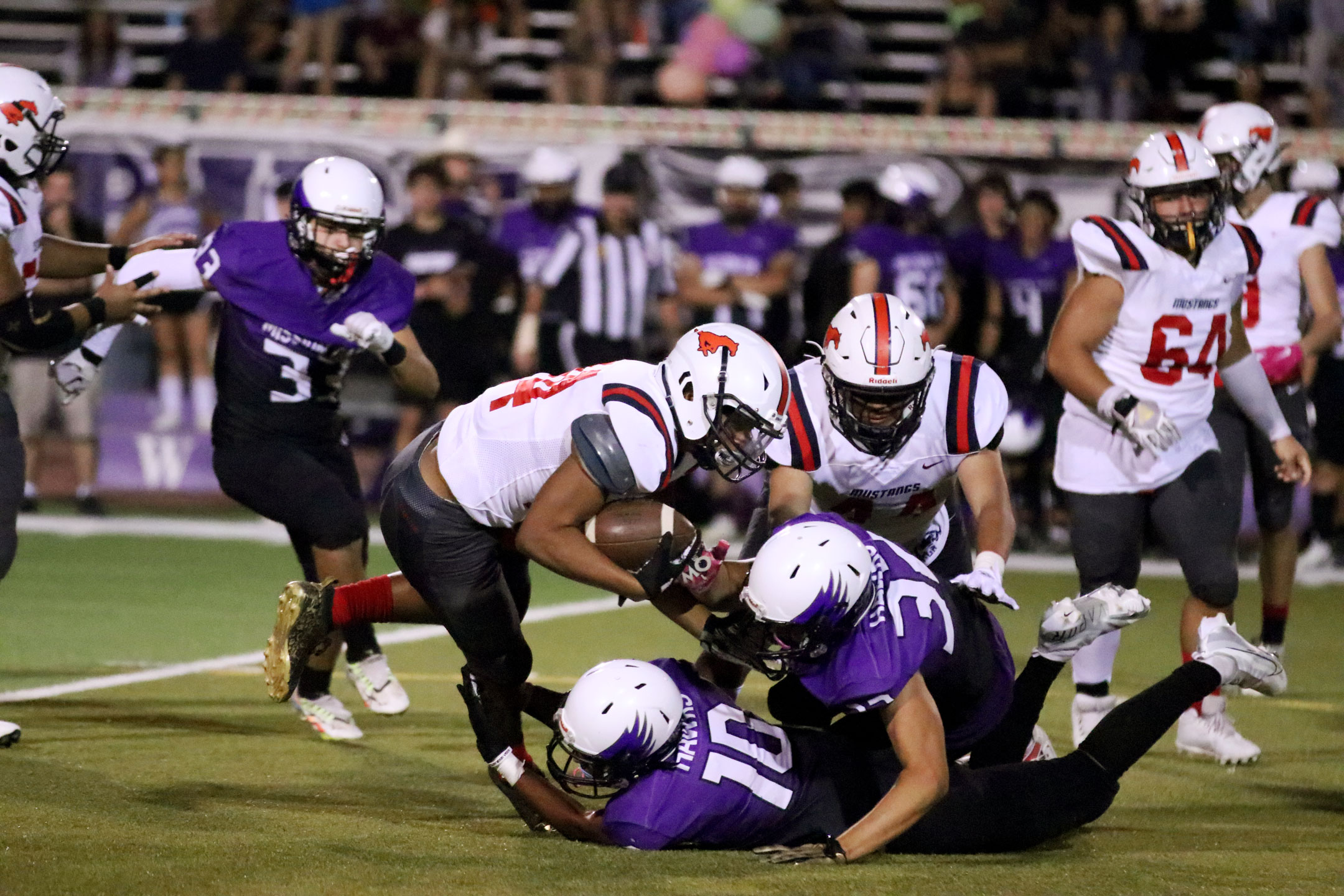 The Mustang defense struggled to keep the Hawks caged throughout the game, allowing six touchdowns. Unfortunately for the Mustangs, their quarterback, Carmine Ficher, was injured last week against Bakersfield Christian. Cornerback David Bejerano stepped up to run the offense in his place.

“A couple years ago I had a quarterback go down and kind of had some luck with a little Wildcat offense trying to run it,” Tulare Western head coach Derek Rosa said. “We tried to get it going.”

The Mustangs got it going enough for senior Jacob Ball to get into the end zone in the third quarter, scoring the only touchdown of the night for Tulare Western. Ball appears to be the jack of all trades of the team, acting as running back, wide receiver and punter at various points throughout the game.

But Ball can’t play 11 positions and the Hawks had several players stand out. Aside from Ramirez and Jackson, the quarterback Daniel Gonzalez made excellent offensive choices and he spent the first three quarters setting up his receivers for touchdowns with beautiful passes. He made the final touchdown himself with a 26-yard run into the endzone with four minutes left in the game.

“Our kids played hard,” Martin said. “We rebounded after the CVC game and I’m really proud of the way we competed tonight.” 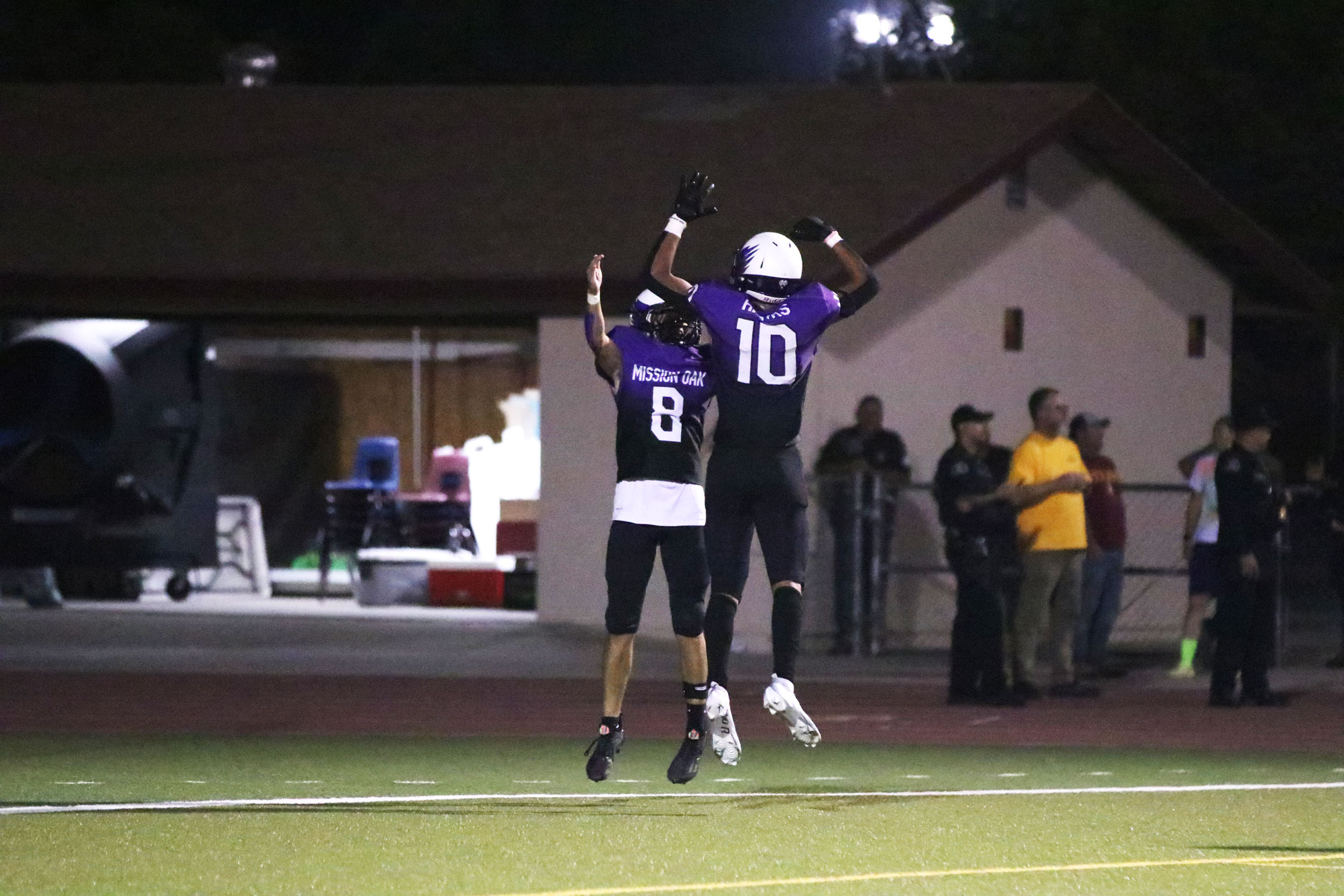 Two Hawks jump in celebration after scoring a touchdown. Photo by Claire Livingston

The Hawks had their first loss two weeks ago against Central Valley Christian. But after a bye week, they’re ready for league play to begin. Martin had spent the time preparing the team to play against Ficher’s offense, but when he found out Ficher was injured, they changed their strategy on defense.

“We guessed right,” Martin said. “We were fortunate to guess right.” 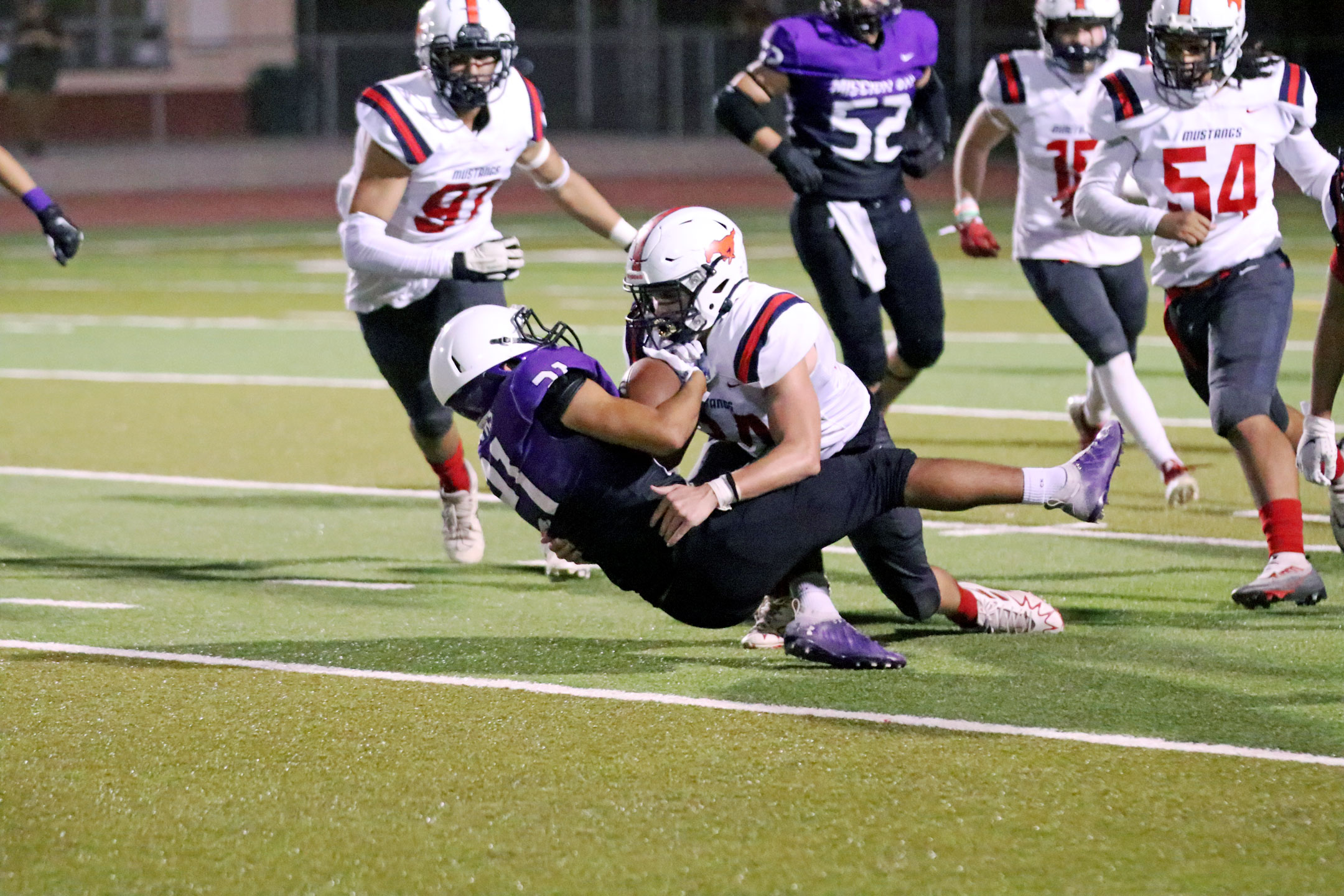 The Hawks will prepare to face the Lemoore Tigers next week. The Tigers beat Tulare Western in their first league game and are currently tied with Mission Oak and Dinuba for the top spot in the West Yosemite League. The Hawks and the Tigers will go head to head at Mission Oak on Oct. 7.

“We could say all the excuses,” Rosa said. “Quarterback’s out, but at the end of the day it’s got to be next man up.”

The Mustangs will hope to step up their game and stay out of last place in the WYL when they travel to play Dinuba on Oct. 7.