VISALIA – The Redwood Rangers upset the undefeated Porterville Panthers in a 28-0 shutout game. They are now tied for first in the East Yosemite League with Golden West.

The undefeated Porterville Panthers probably expected to score at least one touchdown against the Redwood Rangers, but the Rangers defense had other plans for them. The Panthers were shut down early and they did not have many opportunities to score throughout the game. The Rangers put themselves on the board in the first half, then picked up a couple of extra touchdowns in the fourth quarter to seal the deal.

“Offensively, I thought we controlled the ball really well,” Redwood head coach Kevin Scharton said. “Defensively, they had a great game, they pitched a shutout.” 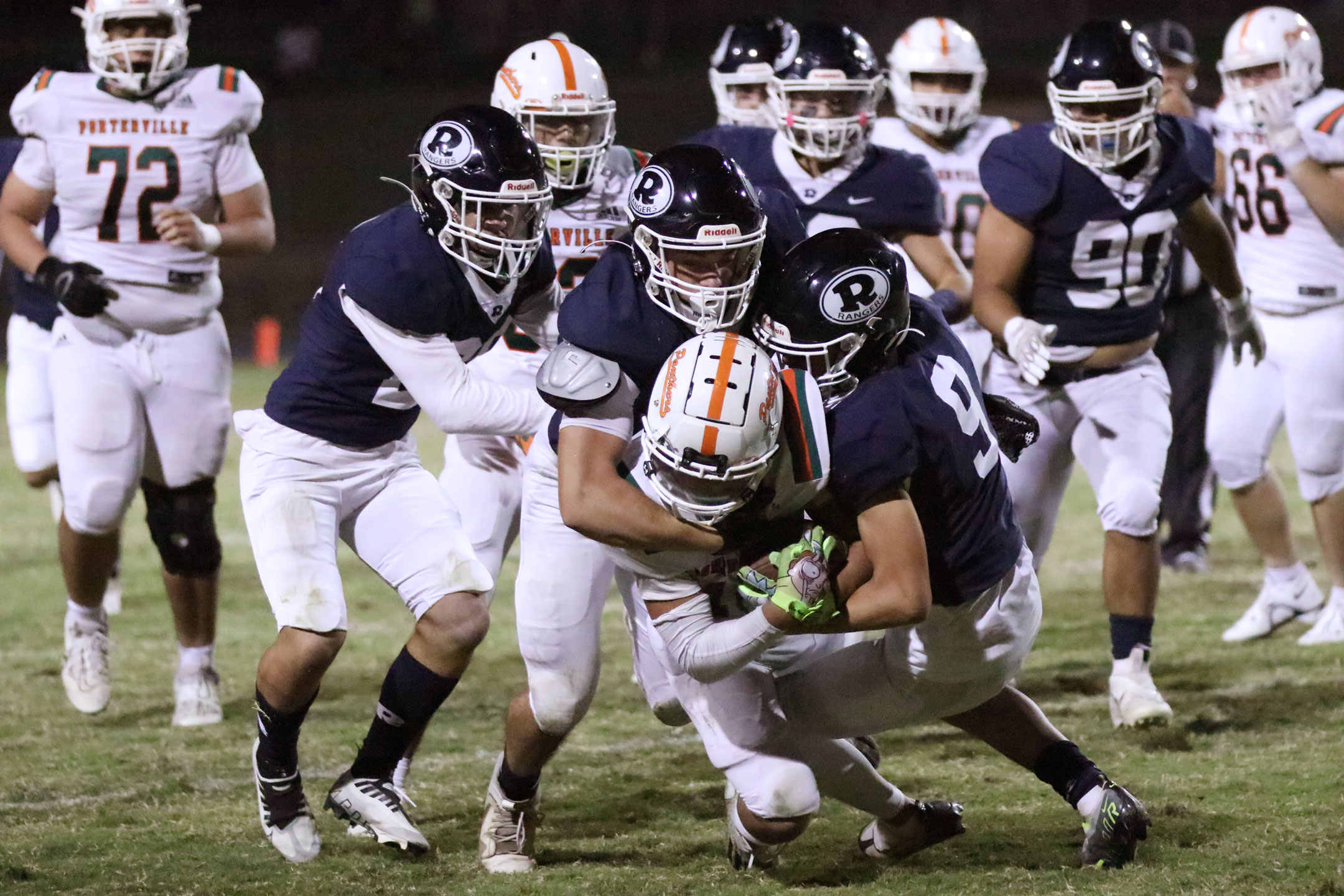 Two Redwood Rangers tackle a Porterville Panther, preventing them from getting any closer to the end zone. Photo by Claire Livingston

Several Redwood players had highlights throughout the game. Cornerback Jacob Perch ran all over the Panthers’ defense in the first half, scoring the two touchdowns in the first half to put the Rangers up 14-0. In the fourth quarter, wide receiver Moses Burk added another touchdown to the scoreboard.

Shortly after Burk’s touchdown, as the clock ticked down, the Panthers attempted to punt on fourth down, but the punt was blocked and picked up by defensive end Kai Preisendorf who ran it into the end zone for Redwood’s final touchdown of the night. It was Preisendorf’s first touchdown of the season.

The Panthers had only two minutes to put points on the board and moved the ball down the field. They threw a pass to get into the red zone, which was intercepted by cornerback Ambrose Bueno with four seconds left on the clock. The game ended with Redwood taking a knee, and the victory.

“It was crazy,” Bueno said. “I just saw the ball in the air and I took the opportunity and just caught it. It happened in a blink of an eye.” 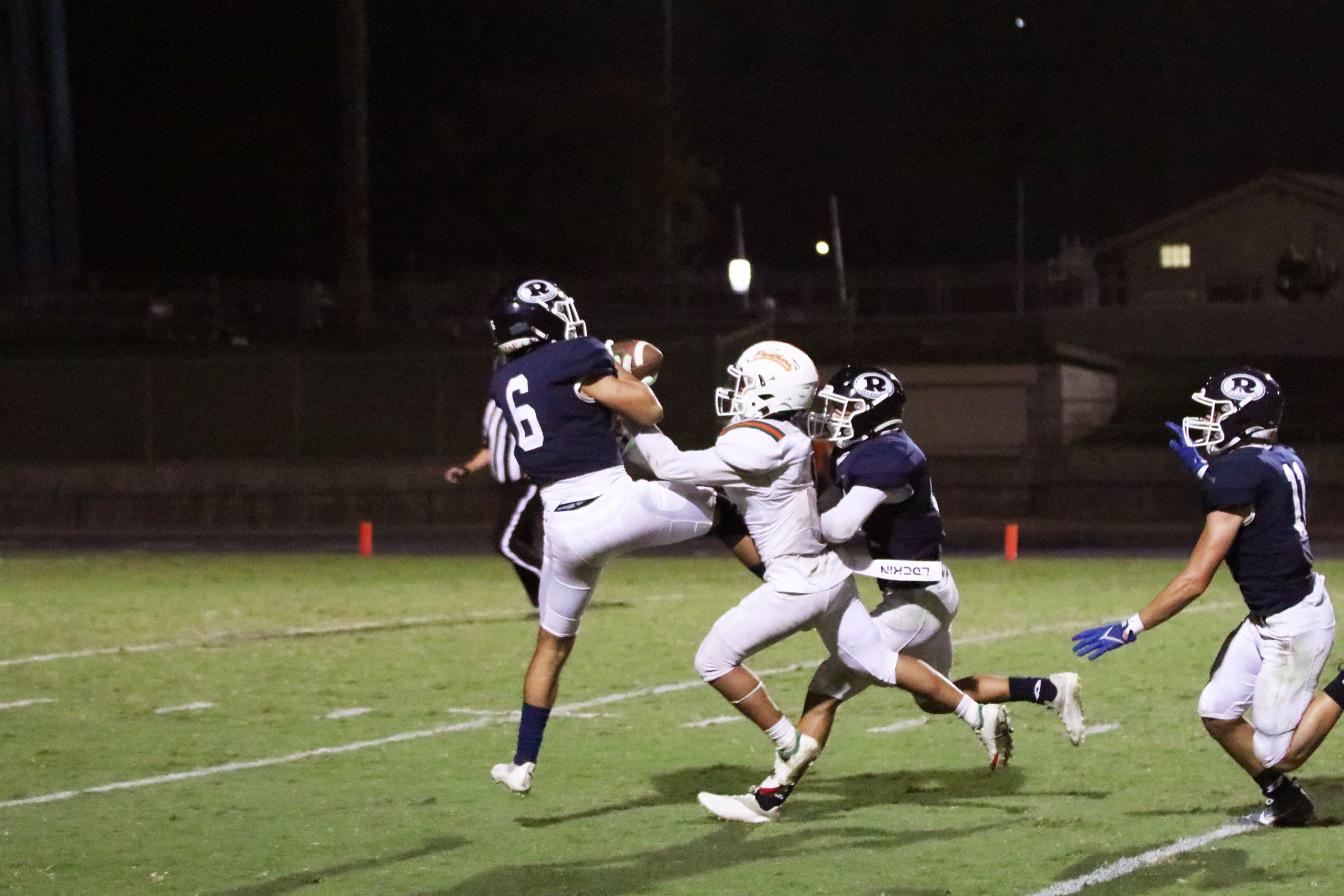 Ranger cornerback Ambrose Bueno intercepted Porterville's last chance to get into the red zone with four seconds left on the clock. Photo by Claire Livingston

The Porterville Panthers will head home with their first loss of the season, but they knew the Rangers would be a tough team. The game was much closer than the score would indicate. It was highly physical from both teams.

“They made a lot of plays on third and long, fourth and long,” Porterville head coach Keith Thompson said. “We need to make those plays if we want to win big games like this.”

Thompson also said it’s important that his team doesn’t beat themselves up over the loss. The Panthers played a tough football game and kept the Rangers on their toes. Both teams should have a good chance to be ranked high in the EYL. 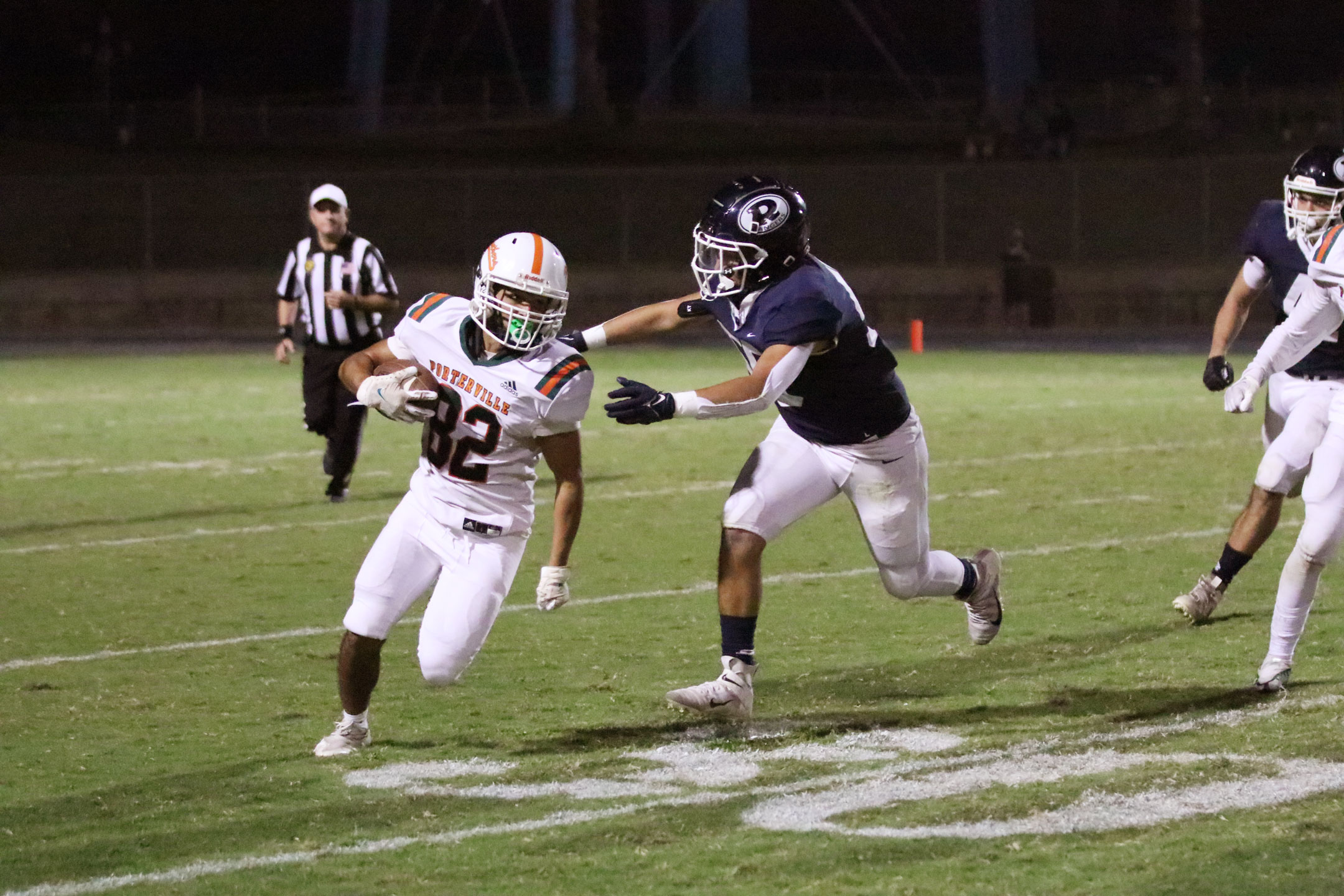 Panther Antonio Arellano escaped Ranger defense at the 30 yard line and took the opportunity to run.Photo by Claire Livingston

Porterville is now tied with Monache for second with a 1-1 record. They will face Golden West on Oct. 14.

Redwood now has a 2-0 record in league play. They are tied with Golden West for first in the EYL. They travel to play Monache on Oct. 14.

“We spent all week preparing for these guys not knowing what to expect from an undefeated team,” Scharton said. “They’re a very good football team but our boys played very well tonight.”