The Woodlake Tigers serve up a storm against the Orosi Cardinals, sweeping them away for another league win

WOODLAKE – The Woodlake Tigers defeated the Orosi Cardinals, putting them in second place in the East Sequoia League as they head into the final three games of the regular season.

Both teams struggled to get a rhythm going in the first set, but thanks to a long service streak by senior Melissa Perez, the Tigers pulled ahead to defeat the Cardinals 25-8. The Cardinals got their combos together and nearly won the second set, but the Tigers turned it around in the second half and won it 26-24. In the third set, the Cardinals seemed to have lost their hustle and another service streak from Perez put the game to bed with a score of 25-15. 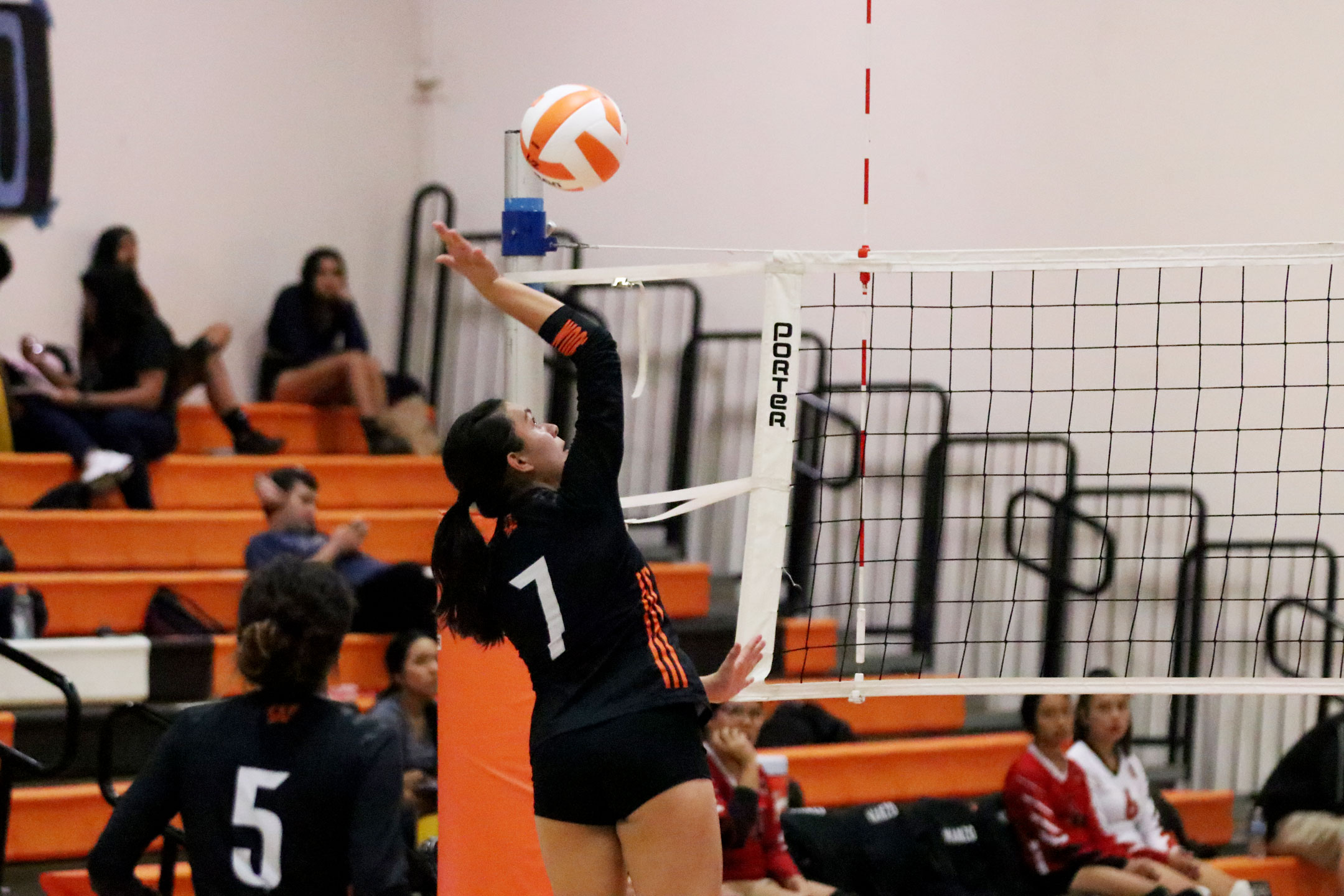 Woodlake Victoria Zisumbo prepares to hit the ball over the net on the Cardinal side of the court on a 3-0 winning effort at home. Photo by Claire Livingston

“Well, we started off really strong as we had planned and then we kind of fell in a little bit of a funk the second game,” Woodlake head coach Florencio Guerra said. “The third set we kind of came back and ran our offense a little bit more consistently.”

Perez’s consistent serves in the first set gave the Cardinal defense a lot of trouble. They struggled to get behind the balls Perez sent their way and many of them bounced off of their outstretched arms and out of bounds. This gave the Tigers a bit of time to get their nerves down and their combinations together for the second set, when the Cardinals gave them a challenge.

Middle hitter for the Cardinals, Genesis Ocampo, led the team in the second set in both blocks and kills. She put several balls down on the Woodlake side of the net that sent the Tigers’ defense diving to the court. Although the Cardinals led for the first half of the match, once the Tigers’ tied it at 13, they stayed ahead and won 26-24.

Woodlake outside hitters Mattison Morales and Victoria Zisumbo were on fire towards the end of the second set and throughout the third. Although Woodlake lost their two original outside hitters to injury early in the season, Morales, Zisumbo and others have worked to improve at playing the position and were lethal on kills from the outside against Orosi.

The Woodlake Tigers are now second in the East Sequoia League and will face Summit Charter Collegiate Academy on Oct. 13.

Orosi seemed to deflate in the third set after nearly winning the second and having it slip out from under them. The Cardinals struggled with receiving serves throughout the game and it was another streak from Perez that ended the final set as the exhausted Cardinals failed to get the ball into play on several of her serves.

“It’s when they face a tough team that they get in their heads,” Orosi head coach Amy Ahuelican said. “We’ll work on serve receives and working together as a team.”

The Orosi Cardinals will play a non-league game against Strathmore on Oct. 13.