The Redwood Rangers give up first set of league play to the Monache Marauders, but maintain their number one spot

PORTERVILLE – The Redwood Rangers have not just been undefeated so far in league play, until their game against Monache they had not even lost a set. They previously swept every league opponent, but the Marauders didn’t go down without a fight.

The Rangers gave up their first set of league play, losing the second set of the game to the Marauders. The final matchup between the number one team in the East Yosemite League, Redwood, and the number two team, the Marauders, was one of the most anticipated volleyball games of the season and the Marauders did not disappoint in bringing a challenge to the undefeated juggernauts.

Right away, the Rangers and Marauders went point for point. There was a struggle for every volley with both teams hustling for balls and sending powerful kills across the net. Eventually though, the Marauders got stuck at nine points. 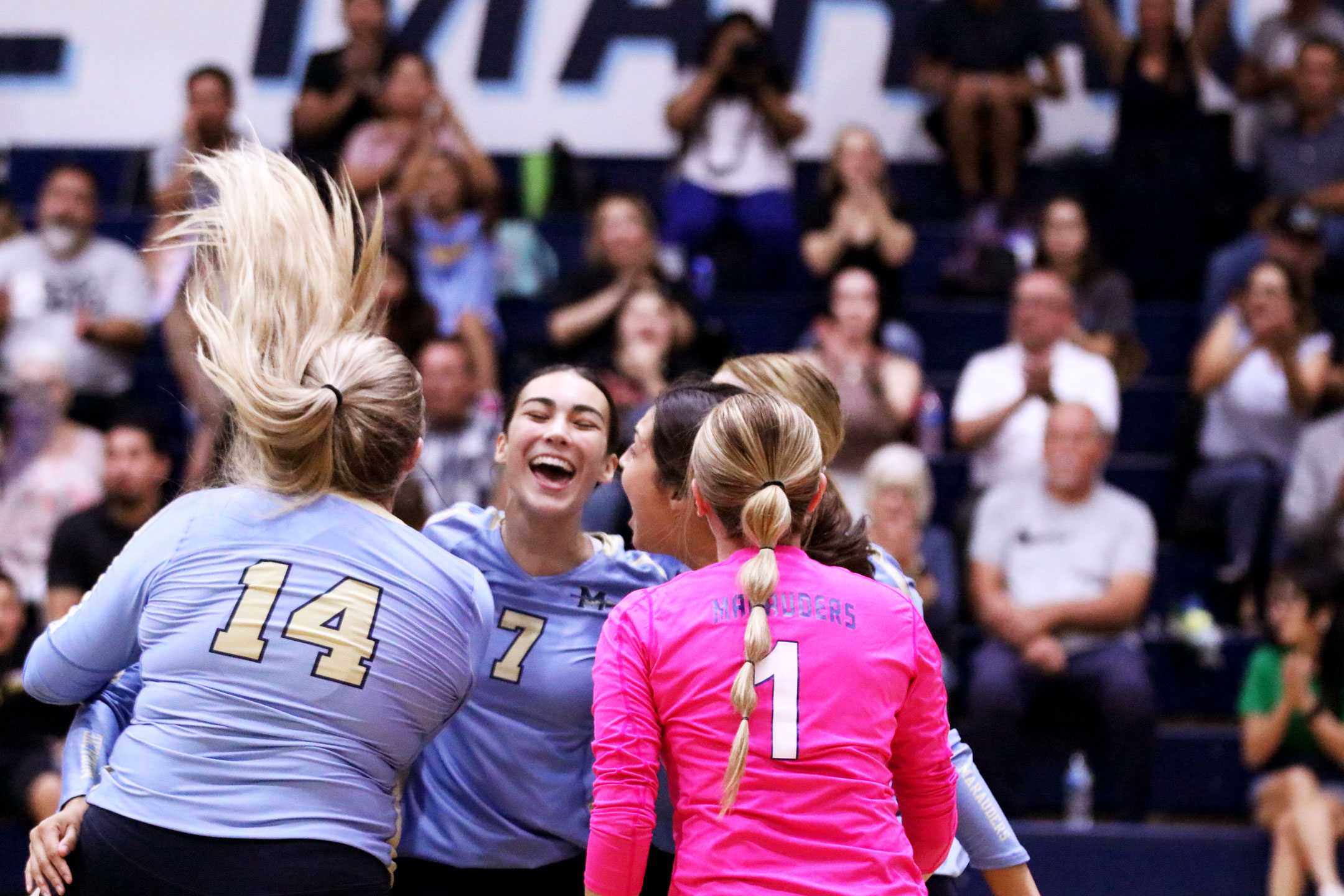 Monache girls meet at the center of their side of the court to celebrate winning the set against the Redwood Rangers. The first set the Rangers have lose in league play this year. Photo by Claire Livingston

First the Rangers were ahead 14-9, then suddenly they were ahead 21-9. Ranger libero Devyn Castaneda was on a service streak that couldn’t be stopped. It looked as if Redwood would take this game in their usual sweeping fashion. Until the Marauders had something to do about it in the second set.

“We had our ups and downs,” Redwood head coach Alana Montgomery said. “But we kept fighting when we struggled.”

The Rangers made some errors in the second set that left them trailing behind Monache. The Marauders were tired, but still hustling. They clearly wanted the win and they gave it their all on the court. They won the second set 25-20. It was the first time the Rangers gave up a set since league play began. 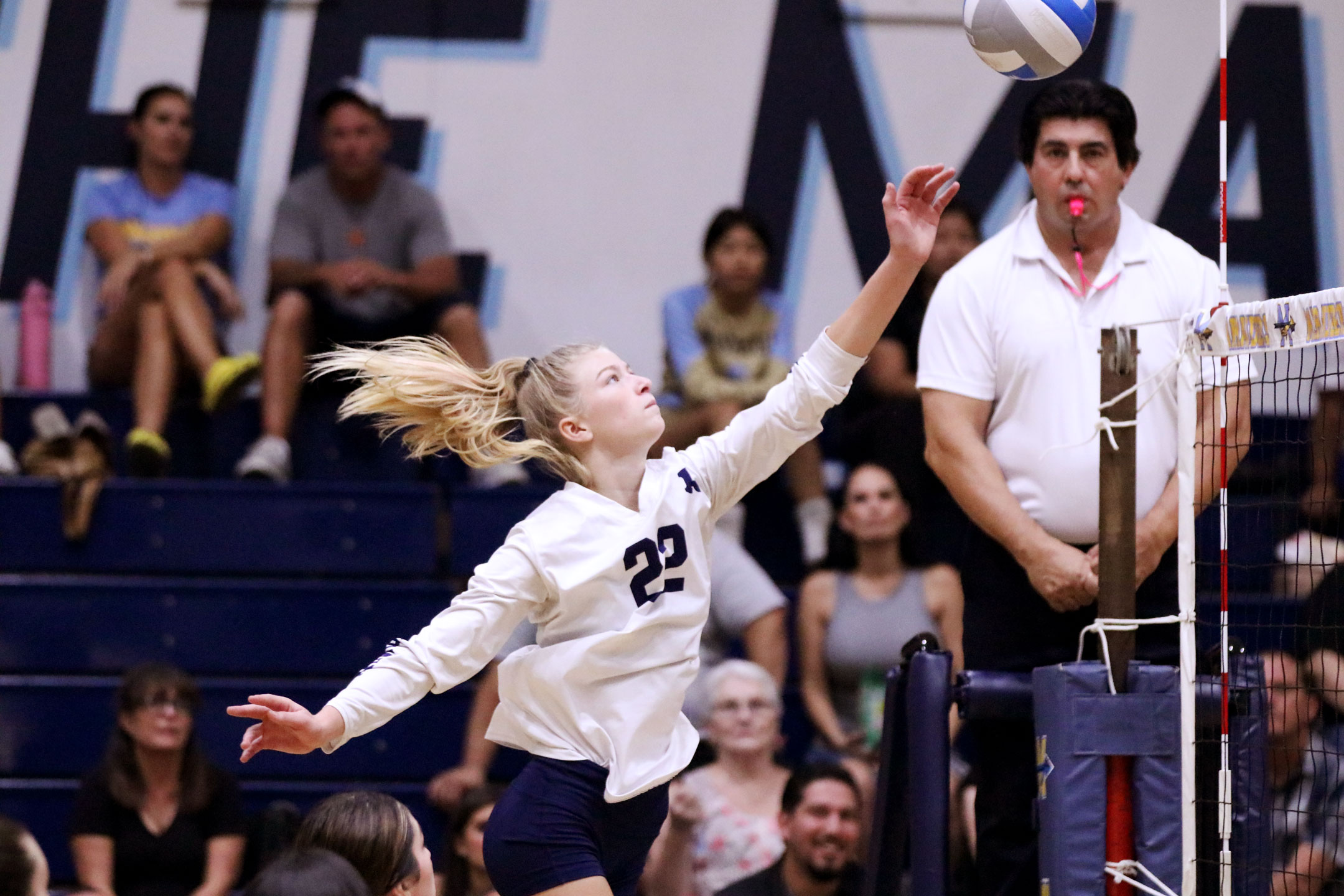 Redwood's Audrey Hyde tips the ball over the net during a winning effort over the Monache Marauders on Wednesday, Oct. 12. Photo by Claire Livingston

“I think we put up a good fight,” Monache head coach Rosie Quinones said. “We took a set from them. We were prepared. We made some changes. We just didn’t have enough.”

The Marauders lost some steam in the third set. Although they were still making phenomenal kills and the Rangers had a few errors, the Marauders just seemed to run out of energy and gave up another set to the Rangers with a score of 25-14.

The fourth set was a battle again. Monache’s middle hitter Jenaya Alvarico was a wall against the Rangers kills. Some of her blocks were so strong, the ball ricocheted back to the floor on the Rangers side faster than any player could even react. The game was tied at 21 points and could have gone either way, but the Rangers pulled it out in the end, winning 25-22.

“We knew we were fighting for a piece of the EYL championship,” Montgomery said. “So we were willing to go as many rounds as it took.”

Senior outside hitter Morgan Castaneda led the Rangers with 21 kills, while setter Audrey Hyde had 21 assists and 14 kills. Opposite hitter Kennedy Cutler also contributed a hefty 15 kills and 8 digs. But Montgomery emphasized that while some players have impressive stats, it’s a team effort to go undefeated.

“While many girls had contributing stats, it really does take all 12 girls to make a season like this happen,” Montgomery said. “We have an extraordinary bench who has been faithfully uplifting to all the players on the court.”

The Rangers are over the hurdle of playing last year’s EYL champions and have two final regular season games. They will face Golden West in their final home game on Oct. 18.

This was the Marauders’ final home game of the season and they honored their nine seniors before the game started. Those nine players only got three seasons due to Covid, but made the most of them. Several of them played on the EYL championship team in 2021. Next season, Quinones will be rebuilding her team from the juniors and underclassmen she currently has on the roster.

“Losing a lot of talent, a lot of heart, a lot of girls that are dedicated,” Quinones said. “But I’m looking forward to the future and just hope that these girls continue to play.”

The Marauders will play their second to last game of the regular season against Mt. Whitney on Oct. 18.